Scotland qualified for Euro 2020 after a playoff but how will Scotland get on at Euro 2021? Here is our guide to Scotland's Euro 2020 chances... 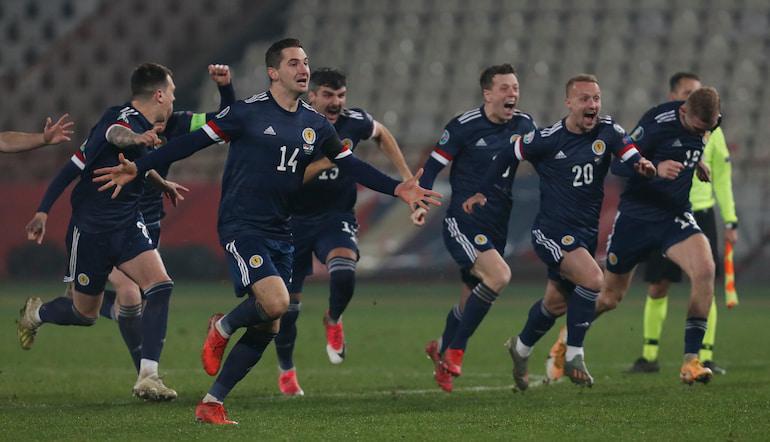 Scotland feature in Euro 2020 odds this summer having qualified for their first tournament since the 1998 World Cup. It has been a difficult couple of decades for the Scottish national team with near-misses and some dreary football along the way.

Steve Clarke’s team get the bonus of playing all three of their matches in the UK. Two of their outings will be in front of an expectant Hampden Park faithful, giving the rare luxury of home advantage in an international tournament.

Having made their way to the Euros through the playoffs, Scotland will be hoping they can sneak into the knockout rounds, and the opportunity to qualify for third place is a real bonus for Clarke and co.

They get their Euro 2021 campaign underway on June 14th as they host the Czech Republic at Hampden. Read below for all the information on Scotland’s Euro 2020 journey...

Those frequently checking out 888Sport’s sports betting will be familiar with the majority of Scotland’s Euro 2020 squad.

John McGinn is a player to watch after another strong season for Aston Villa. This Scotland team is not loaded with attacking talent, and McGinn can contribute goals from the middle third.

Scotland will be relatively happy with their draw. There are tougher Euro 2020 groups.

Group D includes Scotland, the Czech Republic, England and Croatia. While England are one of the tournament favourites, Croatia have declined since their run to the World Cup final, and the Czechs are definitely beatable for Scotland.

Finishing as one of the best third-place teams is Scotland’s most likely route to the knockout phase. This will mean a last 16 matchup with the winner of Group B, C or E.

Scotland have a couple of warm up matches before Euro 2020 gets underway. They face the Netherlands on June 2nd.

This gives Steve Clarke an opportunity to test his squad against more talent opposition, which should prove to be good preparation for the matches with England and Croatia.

There’s then a chance to build some attacking confidence against Luxembourg on June 6th.

The Scots then have eight days to rest and prepare for the start of their Euros venture on June 14th against the Czech Republic.

Scotland feature in one of the early standout fixtures on the Euro 2020 calendar.

Heading to Wembley to face England on June 18th, Steve Clarke will hope his side has picked up three points from their opening match against the Czech Republic four days earlier.

They wrap up the group stage on June 22nd against Croatia.

Heading into Euro 2020, Scotland are on a three-match unbeaten run.

They notched a 4-0 win over the Faroe Islands in their final World Cup qualifier before the competition, and registered draws with Austria and Israel. This came after consecutive defeats in their final Nations League matches.

As their attention turns to the Euros, there’s massive pressure on the result of their first match.

Every tournament fixture is important, of course, but with Croatia and England in the group, it’s going to take a miracle to progress if they fail to beat the Czech Republic.

Steve Clarke’s team will be aware of the significance of the match. The Hampden Park faithful could prove a real boost as they search for their first tournament win since Euro 96.

Scotland’s Euro 2020 kits will be selling quickly. The home jersey is a standard dark blue with red and white touches, including the trademark Adidas stripes in white along the shoulders.

The Scotland Euro 2021 away kit is a bit more out there. The base colour is a very pale blue with a smart dark blue collar. It’s a subtle pattern across the torso, and is unquestionably one of the best kits at this summer’s tournament.

Getting hold of Scotland tickets for Euro 2020 is a difficult task. While not among the favourites in Euro 2020 predictions, Scotland fans are desperate to see their team in tournament action after a 23-year wait.

Unlike other countries, Scotland fans don’t need to jump on a plane and go through the challenges of crossing borders. All three of their group matches are in the UK, with two at Hampden Park and one at Wembley.

Demand for tickets was understandably very high – Scotland fans will be hoping for a few ‘I was there’ moments this summer.

Upon Scotland beating Serbia to reach the Euros, disco classic ‘Yes Sir, I Can Boogie’ re-entered the UK Top 40. This was a response to a viral video of the Scotland players singing the song in the changing rooms.

I Can Boogie has become Scotland’s unofficial anthem for their return to international tournament football and will be heard around the country this summer.

Glasgow band The Fratellis have even produced a cover of the song, which was performed on radio in March 2021.