Spain Goalkeepers | Who Is The Best Keeper To Play For La Roja?

Who is the greatest Spain goalkeeper to wear the famous La Roja jersey? We look at the history of the Spanish national team keepers...

Spanish goalkeepers are often overshadowed in La Liga odds. Amid Ballon d’Or contenders, tactical ingenuity and great rivalries, Spanish football is known for so much beyond its goalkeeping.

The nation which brought us tiki-taka, the Galacticos, and the Dream Team has always impacted football worldwide.

Real Madrid and Barcelona are always a hot topic in football bets today, and even beyond the Clasico foes, La Liga is one of the most-watched sports leagues on the planet.

While they might not always get the attention they deserve, we are giving goalkeepers their moment in the spotlight here. Starting with the present before a look at the past, let’s dive into Spain’s best goalkeepers.

The number one jersey has been passed around over the last few seasons.

David De Gea long looked locked into a decade or so as first choice after Iker Casillas departed, but the Manchester United man’s patchy form for club and country has resulted in opportunity for others.

Alvaro Fernandez was the last goalkeeper to start for Spain other than Simon, earning a cap against Lithuania when several of the squad were unavailable, including Simon. Josep Martinez also made his debut in the match.

Kepa Arrizabalaga is the world’s most expensive goalkeeper, and has 11 caps, but he’s unsurprisingly fallen out of contention over the last few months.

Unable to hold onto his position at Chelsea, Kepa is having to settle for backup minutes behind Eduoard Mendy.

He’s one of the biggest La Liga transfers, but only a move away from west London can get him back into the mix alongside De Gea, Sanchez and Simon.

Spain had the luxury of goalkeeping depth for such a long time. De Gea waited patiently behind Iker Casillas and Victor Valdes. 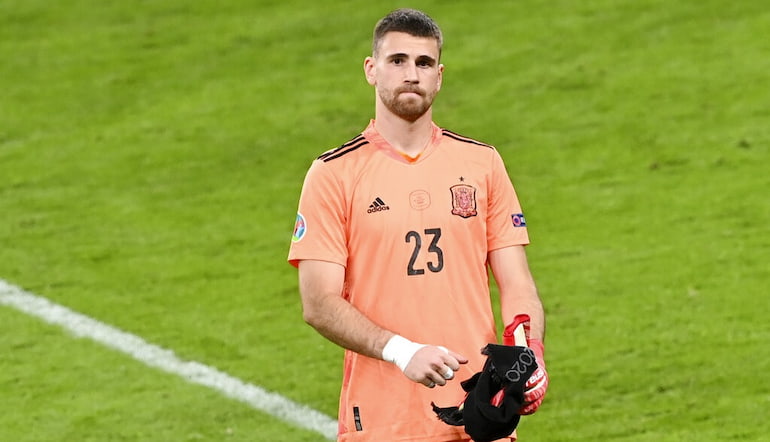 The 24-year-old Simon is well-deserving of his status as number one, but the form of Arrizabalaga and De Gea has left La Furia Roja with a surprising vulnerability at the position.

Simon can make the spot his own, perhaps for the next 15 years. He’s setting high standards with Athletic Bilbao, and the competition pool is comparatively weak compared to the days of Casillas, Valdes and Santiago Canizares.

Others could break into the conversation in the coming months, however. Those who follow La Liga betting tips will be well aware of the performances of Alex Remino as the final line of Real Sociedad’s sturdy defence.

Badía is a name to keep an eye on for future Spain squads – he represented Spain at youth levels, and at just 29 years old, still has time on his side.

The jersey is Simon’s to lose despite some big-name challengers. As Luis Enrique evolves the Spanish squad for Qatar and beyond, goalkeeper is one position he probably doesn’t need to think too much about.

The former Barcelona manager will be hoping Simon doesn’t do anything to change that.

Where else to start?

Only Sergio Ramos has more caps for Spain, only three other players have represented Spain at four World Cups.

Iker Casillas was between the sticks as La Furia Roja won three consecutive major international tournaments, and he was named to the Team of the Tournament on all three occasions.

Casillas was in the FIFPro World XI in five straight seasons. He’s a three-time champion of Europe at club level and was honoured in the Team of the 21st Century.

A case can be made that Saint Iker is the greatest goalkeeper of all-time from any nation. He has a CV like no other.

Winning the Ricardo Zamora Trophy a joint-record five times, Antoni Ramallets represented Barcelona from 1946 to 1962, earning 35 Spain caps in the process. He was the backstop for six La Liga winning teams.

His performances at the tournament earned the ‘Cat of Maracana’ nickname and cemented his legacy among the greatest Spanish goalkeepers of all-time.

Proven at club and international level, Ramallets is arguably the best goalkeeper to ever pull on a Barcelona jersey.

The IFFHS named Ricardo Zamora as the best Spanish goalkeeper of all-time in 1999.

The trophy given to La Liga’s best goalkeeper each year carries Zamora’s name, and while footage of his play is limited, he’s widely recognised among the top ‘keepers of the 20th century.

A heavy smoker, cigar smuggler and drinker, Zamora was a controversial figure in the sport. Yet, no one doubted his ability to pull off sharp saves in his cloth cap and polo-neck jumper.

Playing in the interwar years, El Divino’s experience of elite football was lightyears away from that of Iker Casillas and Victor Valdes.

Excelling with Athletic Bilbao, Barcelona and Valencia, Andoni Zubizarreta is the all-time leader in La Liga appearances and clean sheets.

He also has 126 Spain caps (sixth-most all-time), and a trophy cabinet which features a Zamora Trophy, a Don Balon Award and six La Liga winners’ medals.

While Zubizarreta’s limited ability with his feet frustrated Johan Cruyff at times, he was adept at sweeping behind a high defensive line, and was incredibly durable, rarely missing matches and hardly making an error.

Stuck behind Iker Casillas and others at international level, Victor Valdes made just 20 appearances for his country.

Valdes often got the better of Casillas in La Liga predictions. He was integral to numerous successful Barcelona teams and is tied with Jan Oblak and Antoni Ramallets with a record five Zamora trophies.

While he may not matchup favourably purely as a goalkeeper, Valdes brought so much more to those great Barca sides through his mobility, passing and anticipation.