One of the best players in Premier League history, Steven Gerrard has built up a hefty financial portfolio. How much is Gerrard worth compared to his fellow managers? 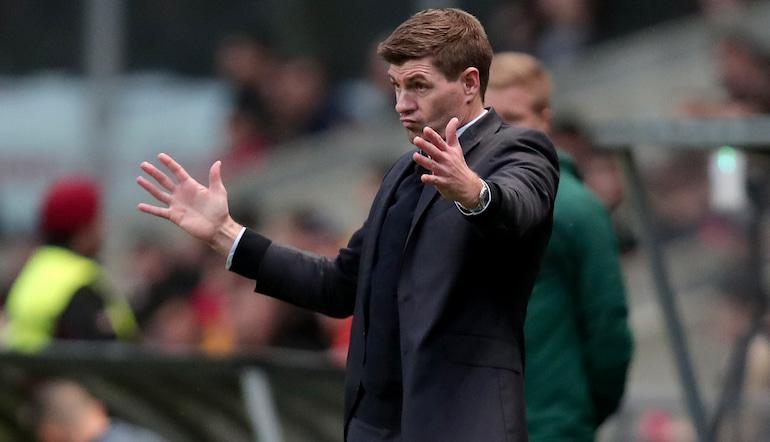 Steven Gerrard was born on the May 30th, 1980, in Whiston, Merseyside. His obvious talent as a footballer from a young age saw him snapped up by Liverpool when still a schoolboy.

He signed his first professional contract with Liverpool aged 17, and what followed was a glittering career that ultimately attained legendary status.

After hanging up his boots, he became manager of Rangers football club and in the 2020/21 season led them to their first title in a decade.

How Much Is Steven Gerrard Worth?

It is thought Steven Gerrard has a net worth of £75m, a staggering figure but perhaps not surprising considering his stellar playing career.

At his peak at Liverpool Gerrard made £180,000 per week. Premier League odds for next season suggest Liverpool would welcome Gerrard at his peak right now.

His 18-month contract at LA Galaxy was worth £4.2 million per year while sponsorship deals bring in £3m per year through global brands such as Adidas and Mars.

After retiring as a player, Gerrard consolidated his worth with BT punditry work and as a youth coach at Anfield before signing a £2.5 million per year deal with Rangers.

He received an advance of £1.5 million from his autobiography, and owns his own company selling natural water that made a £5000,000 profit in 2018.

He also owns at least two luxurious homes with a combined value of £6 million and has a range of top-range cars.

The only big trophy that eluded him was the Premier League title itself. His old club Liverpool will be expected to challenge for plenty more trophies in the coming seasons, as shown in the football betting markets.

As Rangers manager, he finally secured his first trophy in 2021: the Scottish league title.

Individually he was recognised in 2005 as UEFA Club Footballer of the Year and has been in the PFA Team of the Year a record eight times.

Among many other accolades earnt across a long-spanning career as his boyhood club’s inspirational leader and captain he won PFA Player of the Year in 2006. He was awarded an MBE in 2007.

Born in Aintree, Merseyside in September 1092, Alex Curran is a former nail technician who has dated Steven Gerrard since 2002.

The two married in June 2007, on the same day as fellow England players Michael Carrick and Gary Neville. She has since become known not just for her relationship with Gerrard but as a model and fashion columnist.

The couple have four children together – three daughters and a son, who Alex devotes much of her time to.

In 2007, she launched her own fragrance, called “Alex”, which quickly became a best-seller. She turned her hand to designing three years later by launching a collection called Forever Unique that was so successful a second collection soon followed.

Steven Gerrard has spoken publicly about how Alex would love him to quit football management to escape the pressures it brings and relax more with her and the family.

In May 2018, Gerrard left his youth coach role at Liverpool to become the manager of Glasgow Rangers, on a four-year deal that has seen him earn £2.5 million per year.

Gerrard will undoubtedly have received performance-related bonuses during his time as a manager, especially for securing a League title. However, the precise amount he has earned is not in the public domain.

Nevertheless, his success at Rangers means he can soon expect to earn even more as a manager, either by agreeing a new deal at his current club or by moving to one of many big clubs thought to be interested in his services.

In April 2020, along with other senior staff, he commendably agreed to defer part of his wages for three months to help the club cover costs during a pandemic. He received his full wage eventually however, so overall his earnings will have remained constant.

The Steven Gerrard Academy, which was founded in 2011, delivers “life-changing experiences via football and education for young people,” according to the organization's website.

It was set up to give young footballers not fortunate enough to be in a club academy the chance to still experience a top-class football and classroom education.

Those enrolled get to develop their football skills without skimping on schooling, guided by experienced UEFA-licensed coaches and educators.

Like many footballers, the academy shows Gerrard’s desire to give something back into his community and city and inspire many youngsters equally passionate about football.

They may not emulate Gerrard’s success, but the academy is about more than producing footballers.

Gerrard has spoken repeatedly in the past about the pride the academy’s achievements has given him, and the high standards it sets. The academy has been such a success there are plans for two more in 2021, in Tenerife and Surrey.

In May 2016, Gerrard released his autobiography, entitled “My Story”. In it, he details his upbringing and long career, not only recalling the greatest games of his career, but where things did not go as well too, across a long domestic and international career.

Naturally the “Miracle of Istanbul” Champions League victory of 2005, where Liverpool recovered from three goals down, is covered in fascinating detail.

Gerrard writes honestly about his life and about those he has played with, against, and been managed by. There is also a focus on the rollercoaster ride of being a one-club man for virtually all his career.

One of the most capped England players, he talks candidly about his international career and the so-called ‘Golden Generation’, plus the intense Gerrard vs Lampard debate that split fans for many years.

His honest views make this autobiography a must-read for Liverpool and football fans alike.