The 5 Biggest Shocks In US Open History

The US Open has had its fair share of shock results over the years - here are five of the biggest upsets... 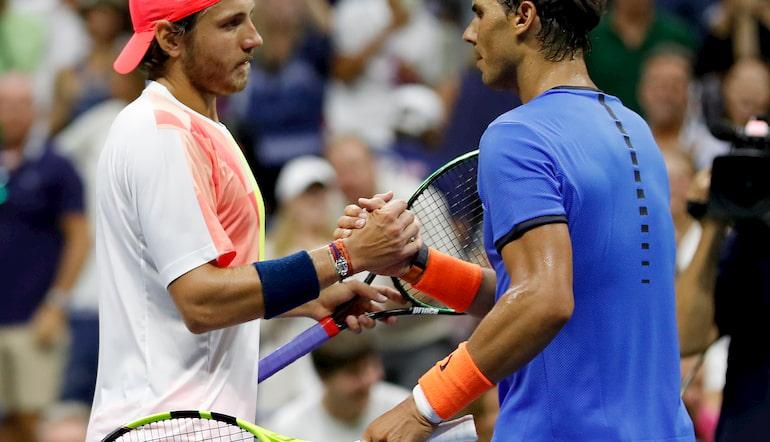 Traditionally the final Grand Slam of the calendar year, the US Open has been home to some huge surprises over the years with several odds-defying victories occurring in the last few years.

The names who feature in this article were not fancied by many in online tennis betting. In some cases there was good reason to back the outsider. In others, even the eventual victor didn’t truly believe they could win.

There are plenty to choose from since the first US Open in 1881. Here are our five greatest US Open shocks...

Coming into the last 16, Lucas Pouille had plenty of miles in his legs.

His journey to that stage had been arduous with two five-set victories in the first three rounds. An epic, four-hour clash with Nadal made it three five-setters in four rounds for the Frenchman.

Nadal struggled through the first set, losing 6-1. When the Spaniard bounced back to take the second set 6-2, many expected him to cruise home.

Pouille had other ideas: he won the third, and another swing saw Nadal take the fourth.

It went to a fifth-set tie break, Pouille took a seemingly comfortable 6-3 lead. The three match points would surely be enough.

Of course, Nadal roared back to make it 6-6. Nadal missed what looked like a perfect chance to go ahead and hit the ball into the net. Pouille finally claimed victory.

A trip to the last four in 2019 Australian Open is the only time since then that Pouille has made it to the quarters of a Grand Slam.

Whatever the rest of his career brings, his place in history, thanks to that famous September performance, is secure.

Simona Halep made unwanted history in 2018.

Becoming the first number one ranked woman to lose in the first round isn’t what the Romanian will have had in mind when she took the court with Estonian Kaia Kanepi.

Kanepi, who had 10 wins over top 10 players to her name at the time, is a veteran of the tour. Into her mid-thirties, it was four years since she had defeated a top 10 player.

Arriving in New York after first-round exits at Wimbledon and the French Open, few fancied an upset.

Halep remains among the best women’s players in the world – will she pick up her third Grand Slam title in 2020?

No one, including Alexander Volkov himself, gave the world number 52 much of a chance against Stefan Edberg in 1990.

Volkov had such little confidence he would hang around for longer than the first round in 1990 that he had booked a flight to West Germany for the Wednesday.

The tournament he was flying to began later in the same week. It changed drastically for the Soviet, however, when he toppled Edberg in straight sets in the opening round.

The overwhelming betting favourite became the first number one seed to lose in the first round in 19 years.

Aside from a run to the US Open semis three years later, it was arguably the highlight of Volkov’s career.

The left-hander only had 17 victories against top 10 players in his entire time as a professional, and the heroic win over Edberg was the only occasion he defeated the top ranked men’s player on the planet.

Coming in as defending champion and world number one, Andre Agassi was heavily fancied to get the better of Arnaud Clement.

Agassi is one of the US Open greats, but he suffered an all-time upset in the second round in 2000. Clement was seeded 37th at the time and had never been beyond the fourth round of a Grand Slam.

Hitting the ball cleanly and punishing a perhaps complacent Agassi, the Frenchman struck nearly double as many winners as his more decorated opponent on his way to a straight sets win.

Clement went on to reach the last eight and was runner-up at the Australian Open a few months later in what was the best period of his career.

A final unfortunately overshadowed by a controversial argument between Serena Williams and the umpire, this is a different sort of upset to the others.

Naomi Osaka had made it to the final and was playing wonderful tennis, but for a player of such little experience to beat the greatest of all-time will always be a surprise.

Osaka’s victory was relatively straight forward. It was over in a couple of sets, with Williams winning just five games.

A spectacular match in so many ways saw some incredible play from Osaka, who was in the bizarre situation of defeating her childhood hero on the biggest stage of all.

888sport never hits the net when it comes to tennis bets