Who are the hottest UFC octagon girls in the sport? We look at the top UFC ring girls, including Arianny Celeste & Brittney Palmer 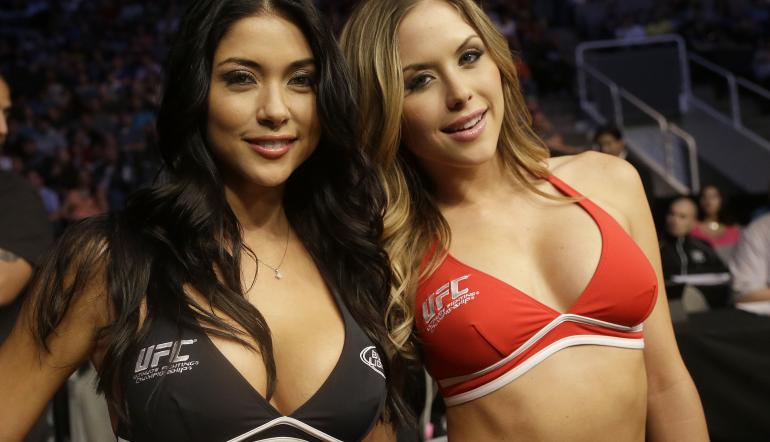 By Alex McMahon
December 7 2020
All Sports

One of the fastest growing sports on the planet, UFC offers viewers a thrilling experience – from betting on UFC before the first bell to a devastating knockout blow in the octagon.

UFC ring girls are now part and parcel of the sport, with the likes of Arianny Celeste and Brittney Palmer enhancing the reputation of UFC octagon girls around the world.

Ring girls have been historically associated with boxing and mixed martial arts has continued this particular tradition – much to the delight of UFC fans.

Without further ado, it is time to look at some of the most famous UFC ring girls. If you are looking to place a live bet on UFC, 888sport is the place to be!

Labelled as UFC’s first real octagon girl, Amber Nichole-Miller made her debut at UFC 40 back in 2002.

She met long-time boyfriend and former UFC fighter Tito Ortiz during her time as a UFC ring girl but opted to leave the organisation in pursuit of another career.

She has appeared in various lifestyle, health and fitness magazines and joined E! Networks show, WAGS in 2017.

Born in Florida, Stanton would regularly travel to Los Angeles for modelling jobs but was a huge hit in the octagon during her time in UFC.

However, Stanton was released by UFC after controversial statements relating to former UFC fighter Josh Koscheck.

Labelled by many as the hottest UFC octagon girl of all-time, Arianny Celeste hails from Las Vegas and has been with the UFC since 2006.

Celeste has won the UFC Ring Girl of the Year award a record six times, making her the most successful octagon girl in UFC history.

In addition, Celeste has featured on the front cover of FHM, Sports Illustrated, Maxim and Playboy. If you are familiar with UFC betting tips, you’ll be familiar with Celeste.

The first European UFC ring girl, Carly Baker was born in England and is one of the few octagon girls with a mixed martial arts background.

While Baker no longer parades as an octagon girl, she regularly appears on TV for the company – and she is widely regarded as one of the hottest UFC ring girls.

With over 200,000 followers on Instagram, Baker is extremely popular with UFC fans around the world.

In 2011, Palmer made her UFC debut at UFC 125 and she has gone on to enjoy a successful UFC octagon girl career, winning Ringcard Girl of the Year on two occasions.

Palmer graced the front cover of Playboy in March 2012, giving her an edge over her fellow UFC octagon girls.

Chrissy Blair is one of the hottest UFC octagon girls. Dana White made the move to bring her into the mix in 2013 after Blair impressed as a Strikeforce ring girl.

A successful model, Blair has been published in most major magazines – including GUESS, Sports Illustrated and Maxim.

While Blair is always linked with various roles away from UFC, fans needn’t worry for the time being – she is committed to her role as a UFC ring girl.

One of the few Brazilian UFC octagon girls, Jhenny Andrade has won the coveted UFC Ring Girl of the Year award on three separate occasions.

Away from her UFC ring girl role, Andrade is a passionate writer and has written columns for VIP Magazine for the best part of a decade.

Football supporters may know her for previously dating Paris Saint-Germain and Brazil star Neymar though Andrade is now happily married.