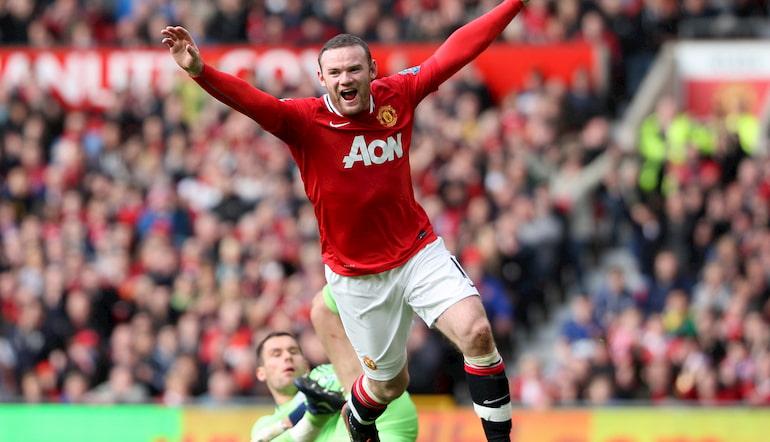 Wayne Rooney is at the centre of British football betting once again after a brief stint in the US.

Returning as a player with Derby County, the former Everton and Manchester United striker has stepped in as manager following the departure of Phillip Cocu.

He might not be making sports betting headlines on the pitch anymore, but Rooney is still one of the most famous figures in European football.

Just like other former players venturing into management, there’s additional attention on Derby because of Rooney and his private life remains a topic of interest for the tabloids.

Here’s everything you need to know about Wayne Rooney, including the latest Rooney salary information...

Wayne Rooney, according to Celebritynetworth.com, is worth around $170 million.

These earnings have primarily been built up through his football career, which he begun as a teenager with Everton. Several massive contracts with Manchester United followed.

Wayne Rooney net worth figures took a hit as he was never as marketable as other English football icons like David Beckham or Steven Gerrard, but he will have still earned several millions in endorsement deals over the years.

It was widely reported that Rooney was the highest-paid player in the Premier League until Paul Pogba re-signed with Manchester United. Rooney will have been paid handsomely for his stint with DC United, too.

Wayne Rooney lives in Mobberley, a small town just outside of Knutsford in Cheshire.

A very wealthy area where many Premier League footballers live, Rooney’s mansion is often valued at around £20 million. Reports from June 2020 claim Rooney built a full-size football pitch on the property.

The house comes with a 40-acre estate and in the summer of 2020 they built an access road, according to The Daily Mail.

Footballers are renowned for their extravagant homes. Each and every of Rooney’s properties has attracted the attention of tabloid reporters, though his six-bedroom Cheshire home is comparatively practical by footballer standards.

Wayne Rooney’s wife is Coleen. The couple started dating when they were in secondary school and got married in June 2008.

Coleen Rooney has become a celebrity in her own right. She has had her own TV series and written columns in magazines, including OK! and Closer.

Coleen has worked with Littlewoods in the past and received several million to front the advertising company for Asda’s brand, George.

Her most famous moment came in 2019, however, when she told the story of how she tried to discover who was leaking stories about her to The Sun. A court case with Rebekah Vardy followed in 2020.

Wayne Rooney has four children with his wife, Coleen. The eldest is Kai Wayne, born in 2009. Klay Anthony was born in 2013 and Kit Joseph in January 2016. The youngest is Cass Mac, who was born in February 2018.

Kai Rooney signed with Manchester United in 2020. The footballing careers of all four of Wayne’s sons will be followed very closely.

The biggest Derby County transfer news in recent history was the arrival of Wayne Rooney from DC United. Rooney signed with Derby in August of 2019.

Despite having two years left on his DC United deal, the transfer was completed in the January window and Rooney immediately became captain – he assisted the opening goal in his January 2nd debut against Barnsley.

Derby struggled to start 2020-21. Their first win came through a late Rooney free-kick against Norwich, but Phillip Cocu was unable to get the team performing well on a regular basis. Rooney’s form wasn’t great, either.

On November 26th 2020, Rooney replaced Cocu on an interim basis and removed himself from the playing squad. He admitted it was possible he had played his final professional match.

Back in 2011, Wayne Rooney tweeted confirming he had undergone a hair transplant. Reports claimed the procedure cost Rooney around £30,000 (which is just a drop in the ocean considering his weekly salary at the time).

Rooney tweeted, “Just to confirm to all my followers I have had a hair transplant. I was going bald at 25 why not. I'm delighted with the result.”

He followed up with more information. “I had it done in Harley street hair clinic London. Thanks to all the staff who looked after me.”

Rooney was widely praised for his honesty about getting a hair transplant. He has since had to return for further appointments with the hair studio as his hair started thinning again a few years’ later.

From one of the best young football players in the world to a Twitter sensation, Wayne Rooney’s Twitter account has become the stuff of social media legend with an array of viral tweets from the early days of the micro-blogging platform.

Rooney is much less active on Twitter now, though his old tweets frequently pop up. His handle is @WayneRooney, and his 17.1 million followers makes him one of the most followed English football players.

Football Betting
Football Tips
About the Author
By
Sam Cox