Wimbledon Courts – How Many Tennis Courts Are There At Wimbledon?

Wimbledon courts are always kept in immaculate condition but how many venues are in use at the Wimbledon Tennis Championships? 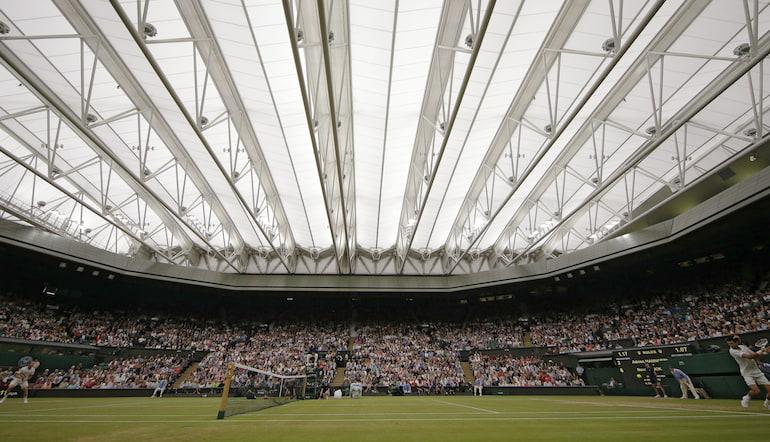 There’s no bigger tennis betting occasion than Wimbledon. It’s a Grand Slam heavy on tradition, an event which lures in fans beyond the usual tennis obsessives.

For all the love of history in southwest London, though, it has been modernised drastically over the last decade or so.

Wimbledon’s courts have caught up with their contemporaries in New York, Paris and Melbourne.

It might not have a major swing in the Wimbledon odds, but the Wimbledon grounds are not like they were in the days of Pete Sampras and Andre Agassi, let alone the decades previous.

Read below for history, information and everything else you might want to know about the Wimbledon courts…

Founded in 1877, the first 44 years of Wimbledon’s existence was between Worple Road and the railway.

During this period, they hosted tennis at the 1908 Olympic Games. In 1922, tennis was growing, demand was increasing, and they needed more space.

The All England Club shifted to Church Road. Centre Court was created. The larger venue allowed the Championships to flourish in a way which would have not been possible at their previous four-acre plot.

Over the following decades, Wimbledon developed their grounds. In 1997, they made a big move to demolish the old No. 1 Court and replace it with a newer, larger No. 1 Court.

The capacity soared from under 1,000 spectators to over 12,000 with this redevelopment.

Just 12 years later, they were again making major changes with a new No. 2 court.

With a capacity of 4,000, this was a challenge for the organisers, as it had to be constructed with the court a few metres below ground level to be acceptable to the local planning committee.

With this new court, the previous No. 2 Court became the No. 3 Court. This had been known as the ‘Graveyard of Champions’ with many Wimbledon greats falling in the early rounds there.

In 2011, they invested further in their fourth and fifth-priority courts. A New No. 3 Court and a new Court 4 were unveiled.

Away from the main courts, the Wimbledon site has evolved greatly. Always pristine, fans will mill around the entirety of the area, catching action on the smaller courts or congregating on Henman Hill.

Those with the most Wimbledon titles are familiar with Centre Court.

While Sampras, John McEnroe and Bjorn Borg all enjoyed some of the best days of their career on Centre at the All England Club, it’s been overhauled since their glorious careers.

Centre Court hosts the finals and will traditionally be home to the biggest names throughout the tournament. British players will often get the honour of playing on Centre in the early rounds.

With dodgy weather often a factor in the Wimbledon fortnight, a roof was added to Centre Court before the 2009 Championships.

It is primarily used for rain, or the risk of rain, but it has occasionally been closed when there’s extremely warm weather. The retractable roof takes 20 minutes to open or close, and play is suspended while the roof is moving.

Although the showpiece court, and where the Wimbledon trophy is handed out, Centre Court’s 15,000 capacity isn’t huge for a Grand Slam tennis venue.

Nine courts have a larger capacity, with the Arthur Ashe Stadium in New York having over 8,000 more seats.

Just like the FA Cup final, it’s customary to have royalty at Wimbledon. The Royal Box is located at the south end of Centre Court, and will often include other famous people.

Wimbledon is a who’s who of celebrity from Hollywood stars to sporting icons being spotted in the stands.

Although the old No. 1 Court was loved by many players and fans alike, the All England Club opted to demolish it in 1997.

The previous court was adjacent to Centre Court, but with demand for tickets always so high, a move and redevelopment was in order.

The atmosphere is less intense on the larger court, but it has made life easier for everyone involved with Wimbledon.

Work started in 2017 to add a retractable roof to No. 1 Court. This was complete in time for the 2019 Championships.

Poor weather, particularly in the first week of the tournament, is much easier to overcome with two courts that can be converted into indoor arenas.

No.1 Court has a capacity a shade over 12,300 as of July 2021. This makes it a couple of thousand seats bigger than Melbourne Arena, which is used at the Australian Open, and Roland Garros’ Court Suzanne Lenglen.

The All England Club has 19 courts.

The main show courts – Centre Court and No. 1 Court – are usually only in use during the Championships for two weeks every summer, while the 17 smaller courts are often used in other events throughout the year.

Visiting Wimbledon is not just about getting to your seat. Exploring the Wimbledon grounds is an important part of the trip, and fans can find various statues and sculptures around the area.

The Fred Perry sculpture next to Centre Court is the most famous, and there are head and shoulder sculptures of the five British Ladies’ Singles Champions.

Officially known as Aorangi Terrace, there is an area of grass from which fans can watch the action on a massive screen towards the northern end of the All England Club.

It’s more commonly referred to as Henman Hill or Murray Mound, though Greg Rusedski’s fans tried to get ‘Rusedski Ridge’ to catch on.

These nicknames are all unofficial, of course, but television and written media coverage will rarely use ‘Aorangi Terrace’ as the name. Henman Hill is the preferred name for many fans despite Andy Murray’s successes.