The Wimbledon trophy is a sight to behold but what is the history behind it? We look at the Wimbledon winners and why there is fruit on top of the trophy... 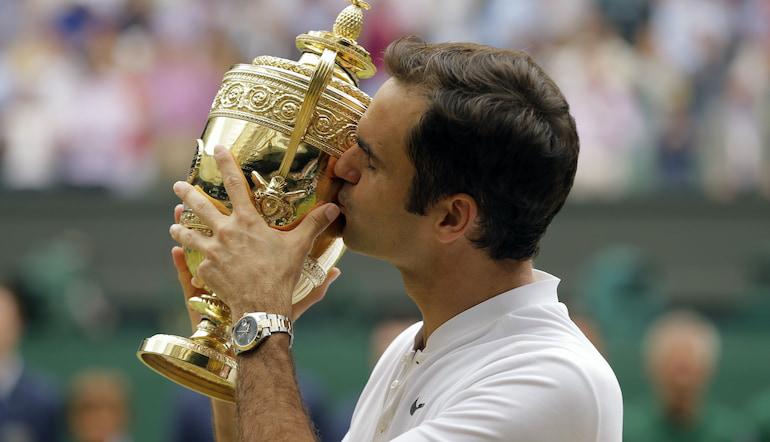 No tennis betting occasion can rival Wimbledon. Holding the Wimbledon trophy aloft is a moment all young tennis players dream of, a crowning achievement in even the most glittering of professional careers.

These are two iconic pieces of silverware in sport, of which their significance impacts careers far beyond the sphere of the ATP and WTA.

The tension of the greatest Wimbledon finals of all-time is fuelled by the weight of pressure. The packed crowds on Centre Court, the chance to write your name in history, is the essence of Wimbledon.

It stands out from other events, and as the only grass court Grand Slam, it is a unique opportunity to be crowned champion at the All England Club.

Images of the victors holding the Wimbledon trophies are plastered across backpages on the following morning. They are among the most famous trophies in world sport, but how much do you know about them?

There is a pineapple atop the Wimbledon’s men’s trophy. The reasoning for this peculiar fruit placement is unknown, though there are obviously theories aplenty across the internet.

The official Wimbledon website claims there is no definitive answer to the great pineapple question. The article notes that when the trophy was designed in the late 19th century, pineapples were not the regularly seen fruit they are today.

Back when William Renshaw was working his Wimbledon magic, pineapples were an uncommon commodity belonging, mainly consumed by the rich and powerful.

Serving pineapples in the western world was a status symbol back then. There was knowledge of their existence, however, meaning it would make sense to put on top of the trophy.

The Men’s Singles’ trophy was first awarded at Wimbledon in 1887.

The edition of the trophy tennis fans worldwide are familiar with succeeded the Field Cup and the Challenge Cup. William Renshaw claimed both of the previous trophies after winning each one three times in a row.

While the fastest tennis serve records have been shattered over and over since Renshaw’s days, the trophy has stayed much the same.

It’s made of silver gilt, and is 18 inches high. The Wimbledon men’s trophy is roughly 15 centimetres shorter than the FA Cup, and approximately half a foot shorter than the Vince Lombardi trophy, which is handed out to the winners of the Super Bowl.

The trophy is inscribed with ‘The All England Lawn Tennis Club Single Handed Championship of the World’.

Every champion since Spencer Gore in 1877 is inscribed on the trophy, though they ran out of space in 2009. Since then, winners have been inscribed on a separate black plinth which champions also receive.

From the 1949 competition onwards, every winner has taken home a replica of the trophy. The champions’ replica is three-quarters of the size of the original.

Most Successful Men In Wimbledon History

Roger Federer’s eight Wimbledon singles’ titles makes him the most successful man in the history of the event.

He has lifted the iconic trophy, pineapple and all, more than anyone else in the Amateur or Open eras, including a five-peat between 2003 and 2007.

William Renshaw is one of two men with seven Wimbledon singles titles, but most of his success came before this version of the trophy was introduced. Pete Sampras is the only other man to have his name on the trophy more than five times.

Novak Djokovic, Laurence Doherty and Bjorn Borg all have five titles to their names.

Borg and Djokovic have five three-quarter-size replicas of the trophy each – Djokovic could end his career with the most stacked Grand Slam trophy cabinet in the history of men’s tennis.

The Venus Rosewater Dish is the Women’s Wimbledon trophy. It was first presented back in 1886. This coincided with the introduction of the Challenge Round, and it is made entirely of sterling silver.

The Women’s Wimbledon trophy is 18.75 inches in diameter. This makes it roughly the same size as the men’s trophy.

Other famous sporting silverware of a similar shape include the FA Community Shield and Bundesliga’s Meisterschale. The Meisterschale is slightly bigger than the Wimbledon’s Women’s trophy at around 23 inches in diameter.

Absent of pineapples, the Rosewater Dish has a mythological theme. The figure of Temperance is in the centre of the dish, holding a lamp in one hand and a jug in the other.

The four reserves around the edge of the dish feature four classical gods. The Rosewater dish was made in Birmingham in 1864 for 50 guineas by Elkington and Co. Ltd of Birmingham.

Most Successful Women In Wimbledon History

So, which women have had the honour of lifting the Rosewater Dish on the most occasions?

Martina Navratilova’s nine Wimbledon singles’ titles make her the most successful player ever. Navratilova was an unstoppable force throughout her career, but particularly so at the All England Club.

Behind Navratilova, the Amateur Era players are often overlooked. Not here, though.

Helen Wills Moody’s success might be cut out when records are focused on the Open Era, but Wills Moody has lifted the Rosewater Dish more than anyone else with eight titles between 1927 and 1938.

Three others sit on seven titles. Dorothea Lambert Chambers, like Wills Moody, is sometimes forgotten due to the era of her dominance.

Lambert Chambers’ claimed the Rosewater Dish seven times between 1903 and 1914, though three of those victories came in the Challenge Round.

Steffi Graf and Serena Williams join Lambert Chambers with seven Wimbledon Women’s Singles titles – will Serena add to her tally before she retires? Williams has won the Rosewater Dish in successive years on three occasions.

Visit 888sport if its a punt on Wimbledon you're after