Who is the youngest Champions League goal scorer of all-time? We look at 10 rising stars who netted in Europe's elite club competition... 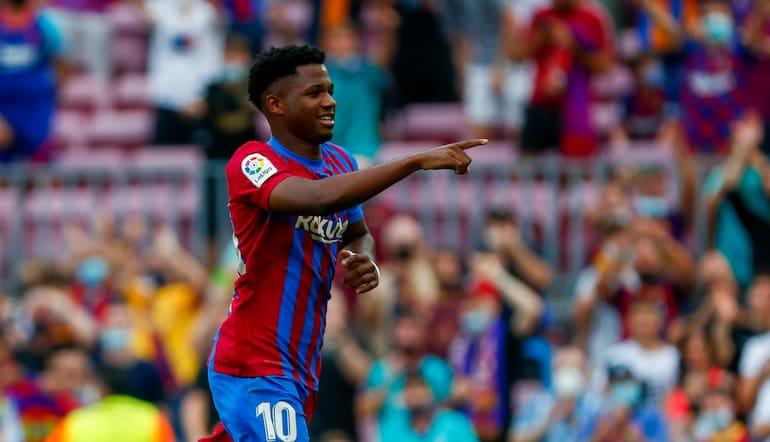 Every season or two a star is born on a Tuesday or Wednesday night.

Appearing in the Champions League odds for the first time, a teenager will catch the eye of millions, dazzling when the lights are brightest and the stakes are highest.

This is the romanticised outcome, of course, as the unbalanced nature of some group stage fixtures can also provide a platform for young players to get Champions League minutes in non-competitive fixtures.

The oldest Champions League goal scorers were largely established greats. Now, we’re looking at the other end of a footballing career, the seasons where players are proving themselves at the highest level and breaking a different sort of record.

Here are the 10 youngest goal scorers in Champions League history.

A regular for club and country as a teenager, Pedri isn’t expected to be a prolific goal scorer.

As Barcelona were thrashing Ferencvaros in the 2020 group stage, though, the Spaniard found the net for the first time in the Champions League, and became the ninth-youngest scorer in the competition’s history.

Having lost Lionel Messi, Barcelona are looking to build around Pedri and Ansu Fati (who scored in the same game) in the coming seasons.

It doesn’t like the teenager is going anywhere soon – he’s just signed a five-year deal with a €1 billion release clause.

Aaron Ramsey signed for Arsenal from Cardiff in 2008. Within months he was playing in the Champions League, and in October, he scored in the Gunners’ 5-2 demolition of Fenerbahce.

The Welshman’s goal was scored in the dying embers of a match that was all but over. Another player on this list started for Arsene Wenger’s side that night, too.

The most recent entry to this list, Jude Bellingham scored his first Champions League goal in a thrilling match between Borussia Dortmund and Manchester City in April 2021.

It was Dortmund’s only goal of the match in a tie which City eventually progressed from on their way to the final.

Bellingham has already been used in different roles for Birmingham, Dortmund and England. Possessing the talent to become one of the world’s best, it’ll be fascinating to see where he ends up for club and country.

Breel Embolo was one of the top prospects in world football in 2014. Leading the line for Basel against Ludogorets, Embolo opened the scoring in the 34th minute as the Swiss club cruised to a 4-0 win.

A move to the Bundesliga with Schalke followed soon after. Missing almost a year through a horrific injury hampered his development, but the Cameroon-born forward still earned a move to Borussia Monchengladbach in 2019.

Playing alongside Petr Cech for Sparta Prague in 2002, Martin Klein was a promising young defender.

His goal wasn’t enough for Sparta to avoid defeat against Panathinaikos, and his career with the Czech club didn’t last much longer.

Klein spent the majority of his career with Teplice and didn’t make his Czech Republic debut until 2009.

When Bojan Krkic was starting up front for Barcelona in 2008, sharing a frontline with Thierry Henry and Samuel Eto’o, he was the brightest prospect on the planet. Some thought he was better than Lionel Messi.

Bojan scored the only goal of the game as Barcelona beat Schalke in the first leg of the 2007/08 quarter-finals. Injuries and falling out of favour meant Bojan eventually left Barcelona for Roma in 2011 after 163 appearances for the Catalan club.

Spells with Milan and Ajax followed before Bojan found a new home with Stoke where he was a key player and beloved by the Potters’ fan base.

A major injury again derailed his career, though, and a couple of loan spells followed. He signed for Vissel Kobe in 2021.

Given the heights he reached as a teenager, it’s not fair to few Bojan as a failed wonderkid, It’s still hard not to wonder what could have been.

Playing alongside Dennis Bergkamp, Robert Pires and Thierry Henry, Cesc Fabregas was special as a teenager. He slotted into Wengerball with unerring ease, scoring his first Champions League goal in a demolition of Rosenborg.

Of course, the Spaniard went on to win it all on the international stage. A big-money move to Barcelona enabled him to achieve a childhood dream after becoming a true star at Arsenal.

His relationship with the Emirates faithful took a hit when he signed for Chelsea, though his performances for the west London club only cemented his status as a Premier League great.

Having held the Champions League trophy aloft on multiple occasions, Mateo Kovacic’s career has gone onto much greater things since scoring the lone goal in Dinamo Zagreb’s 7-1 loss to Lyon in 2011.

Kovacic left the Croatian club just a couple of years later to join Inter. It was a short stay in Milan before joining Real Madrid and then Chelsea.

While his goal production numbers leave plenty to be desired, there’s no question Kovacic has lived up to his immense promise as a teenager.

Cristiano Ronaldo is the only player in the Champions League era with more medals than Kovacic. With Chelsea again among the football betting favourites, he could add to a fifth before he hangs up his boost.

Peter Ofori-Quaye held this record for over a decade.

Scoring his first Champions League goal in Olympiakos’ heavy defeat to Rosenborg in 1997, Ofori-Quaye was highly regarded by the Greek club, but he never broke into the major European leagues.

He did feature in two African Cup Of Nations for Ghana, however, and won six league titles with the Erythrolefki before departing in 2003.

Destined to star on football prediction websites for years to come, Ansu Fati is the latest teenage sensation to pull on the blue and garnet of Barcelona.

Fati broke Ofori-Quaye’s record in December 2019. Where many other goals on this list were lacking in-game significance, Fati’s was a match-winner.

Romelu Lukaku had drawn Inter level just before the break, but Fati’s 86th minute strike stole the victory for Barcelona.

Already established with Spain and Barcelona, this could be one of many records in his possession in a few years’ time.