Anthony Joshua net worth figures show the British fighter is one of the richest athletes on the planet - how much is Anthony Joshua worth? 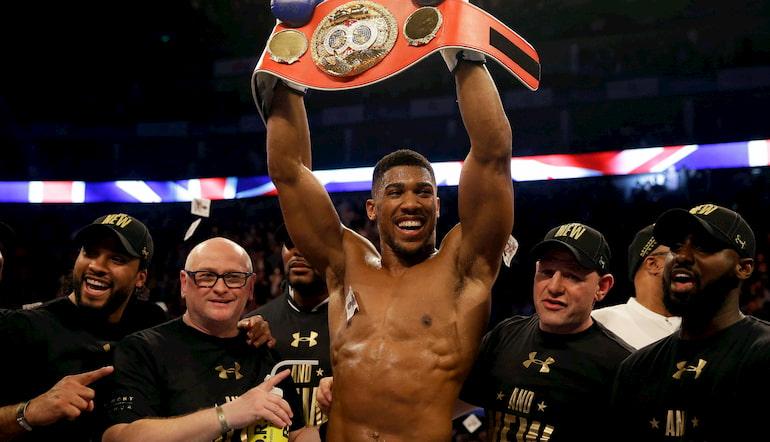 Anthony Joshua is one of the biggest names in boxing. A popular pick in boxing betting odds ahead of each bout, AJ leads the way in the heavyweight division.

Joshua suffered a shock defeat to Andy Ruiz Jr at Madison Square Garden in June 2019 but regained his belts at the first time of asking in the eagerly anticipated rematch.

According to reports, Joshua now has his sights set on Tyson Fury and an epic bout awaits in 2021. Boxing fans will enjoy a live bet on that fight should it go ahead…

Without further ado, it is time to look at Anthony Joshua net worth figures. Is he the richest man in boxing? We profile the Watford fighter and discuss Joshua’s wealth.

Weight fluctuates on a regular basis for boxers – some fighters drop into one of the other boxing weight classes while many aim for a weight to combat their opponent.

Anthony Joshua weighed in at 237 lbs for his rematch with Andy Ruiz Jr – 10 lbs lower than his recorded weight for the first fight.

As of December 11th 2020, Anthony Joshua has a 23-1 professional record – winning 21 of those fights by way of knockout.

To this day, Andy Ruiz Jr is the only man to defeat AJ in the ring, securing a seventh-round stoppage over the British fighter in June 2019.

Wealth is usually associated with extravagant purchases but Anthony Joshua has stayed true to his ‘Stay Humble’ catchphrase when it comes to buying property.

In fact, Joshua has instead shared his wealth with family and friends – living with his mum in a two-bedroom ex council house during the early part of his professional career.

Since then, Joshua has bought the house outright for his mother while also forking out a hefty £500,000 on a penthouse for his ex-girlfriend and son, Joseph.

While AJ has rented a lavish £20,000 a week mansion in the past, he remains grounded and has opted to share his wealth with those in tough positions.

Joshua has helped pay for medical care and school fees for vulnerable children while he has also been known to surprise friends with extraordinary gifts.

How Old Is Anthony Joshua?

At the time of writing, Anthony Joshua is 31 years old. He was born on 15th October 1989 in Watford, Hertfordshire.

How Much Is Anthony Joshua Worth?

According to the Sunday Times Rich List, Anthony Joshua’s net wealth is an estimated £107 million.

Figures show that Joshua has earned over £100 million in career earnings and the British fighter is one of the richest boxers of all-time.

While there are limited financial figures, Tyson Fury net worth is an estimated £110 million but Joshua’s wealth is likely to surpass that total in the near future.

When Is Anthony Joshua’s Next Fight?

Reports claim that Joshua is lining up an epic bout with Tyson Fury in 2021 and that could go down as one of the best heavyweight fights of all-time.

How Many Calories Does Anthony Joshua Eat?

Anthony Joshua’s average daily consumption is between 4,000 and 5,000 calories but he can eat up to 5,500 calories while training for an upcoming fight.

An example of a typical breakfast for Joshua is a large smoothie, with yoghurt, fruit, porridge oats and milk.

Immediately after training, Joshua has a second breakfast – which consists of up to five eggs, wholemeal bread, apple juice and salmon.

After his second training session of the day, Joshua consumes a recovery shake snack that is full of protein, good carbohydrates and bananas.

When it comes to dinner, Joshua has been known to eat two large salmon fillets with brown rice and vegetables followed by fresh oranges and natural yoghurt for dessert.

However, Joshua switched this plan before his fight with Alexander Povetkin to steak, green beans and starchy foods.

Joshua finishes his day with some nuts, yoghurt with honey or a protein bar, fruit mousse or fruit shake.

Is Anthony Joshua A Billionaire?

While Anthony Joshua has some way to go until his net worth is £1 billion, boxing promoter Barry Hearn has previously claimed that AJ will be boxing’s first billionaire.

Joshua had built up his own brand from ground zero and he could eventually become one of the richest athletes in the world if the boxing star continues to thrive.