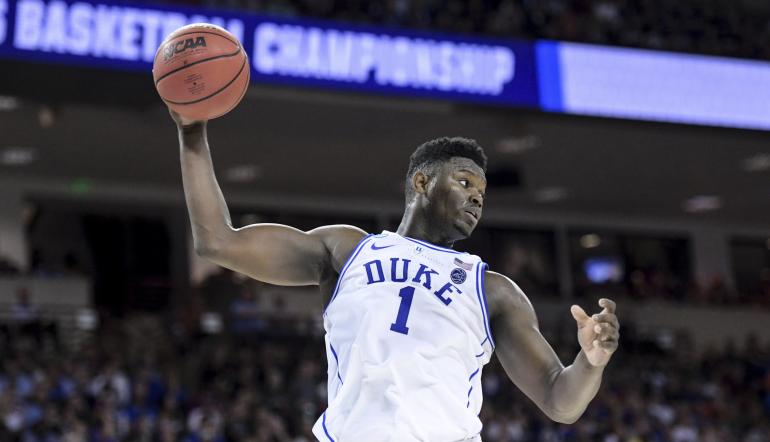 The NBA season is no more than a few weeks away. With preseason getting underway, and James Harden inventing another new shot, there’s a sense of optimism about the 2019/20 NBA campaign that hasn’t existed in several seasons.

As reflected in the NBA odds, it’s wide open. There are at least eight teams who harbour realistic title ambitions, a stark contrast to the previous years of Golden State and Cleveland (prior to last year) supremacy.

More players moved teams this offseason than any other in NBA history. The balance of power altered drastically, with multiple All-NBA players pulling on different threads this coming season.

There’s uncertainty, particularly in the Western Conference, and there are narratives galore. Here are five players to keep an eye out for…

You knew Zion Williamson was appearing on this list, didn’t you? Well instead of leaving him further down, let’s get the most obvious selection of all out the way.

The first overall pick in the 2019 NBA Draft was limited to very minimal action in Summer League, but he’s expected to be available throughout preseason for the new-look New Orleans Pelicans.

Alvin Gentry has a deep roster his disposal after a wild David Griffin-led offseason. Williamson will be a starter, there’s no doubt about that, but the line-ups they run out with him will be interesting.

Floor spacing could be an issue for New Orleans – Gentry may use Williamson and veteran shooter JJ Redick together frequently.

Steph Curry will be joined by 2018/19 All-Star D’Angelo Russell, the former Los Angeles Laker who arrived in a sign-and-trade that saw Kevin Durant join the Brooklyn Nets alongside Kyrie Irving.

The Warriors’ defence has been underrated in the past few seasons. With no Thompson until at least the All-Star break and Durant having left, they might struggle to be around league average.

Russell and Curry in the backcourt will be vulnerable – Steve Kerr will need to experiment with his line-ups in preseason.

Golden State will still be good this year, but just how competitive they are before Thompson’s return will depend heavily on Russell. Expect to see a lot of pick and roll, particularly when Curry’s resting.

Picked fifth overall by the Cleveland Cavaliers, Darius Garland’s preseason isn’t about setting the tone for a big regular season or the short-term future.

In the post-LeBron Cavaliers world, their draft selections were always going to be key. Garland follows Collin Sexton – selected eighth overall in 2018 – as a high-profile backcourt selection, and the Cavs plan to put the two together in the guard spots.

Comparisons to the Dame Lillard, C.J. McCollum duo in Portland were made on draft night. If they can get anywhere near that level, Cleveland will have done very well to restructure their team after losing LeBron James and Kyrie Irving in quick succession.

Garland, playing in a small market on an uncompetitive team, will be overshadowed by Williamson and Barrett. Keep an eye out for his partnership with Sexton though, as it could be a very real threat in the Eastern Conference before long.

Just mentioning ‘Ben Simmons’ and ‘jump shot’ on the same webpage is a cliché at this point. That isn’t to say it’s not worth a reference here, however.

The Philadelphia 76ers were very active throughout last season, trading for Jimmy Butler and Tobias Harris. The offseason was just as hectic.

Harris stayed thanks to a monster contract, Butler went to Miami in a sign-and-trade that brought in Josh Richardson. Al Horford signed from the rival Celtics. Redick departed for New Orleans.

Spacing was a problem at times last season, and the loss of Redick makes it a bigger issue for Brett Brown. While videos of Simmons hitting long-range jumpers have had the internet chattering for months on end, the former first overall pick is yet to attempt them regularly in games.

It’s not an exaggeration to suggest that Simmons’ willingness to shoot is the difference between the Sixers being title contenders or not.

Still an All-Star, still an elite defender, generational passer and superman-esque athlete, Simmons is brilliant as he is, but adding that jumper can make him something else. Maybe that something else is an MVP.

We’re not expecting buzzer beaters, but just trying a few shots in preseason would be a game-changer.

Returning to NBA action for the first time since tearing his ACL in February 2018, Kristaps Porzingis will likely be eased into preseason.

Fresh off a $158 million contract, Porzingis will be hoping to get back to his All-Star level of before the injury, but durability is a notable concern.

The Dallas Mavericks are in that fringe playoff group with the Sacramento Kings, San Antonio Spurs and New Orleans Pelicans.

Luka Doncic and Porzingis have an immensely high ceiling, but the worries with Porzingis’ health are obvious, and with that long-term contract signed, the Mavericks are in a bit of trouble if he proves to be unreliable.

Preseason won’t reveal everything, as there’s bound to be a bit of rust on that 7’3 frame, but it will give a bit of an insight into how close Porzingis is to the 2017/18 All-Star who averaged 22.7 points per game.

Basketball
NBA
NBA Preseason
About the Author
By
Sam Cox