Who is the greatest basketball player in NBA history? Our NBA expert gives his top 10 rankings... 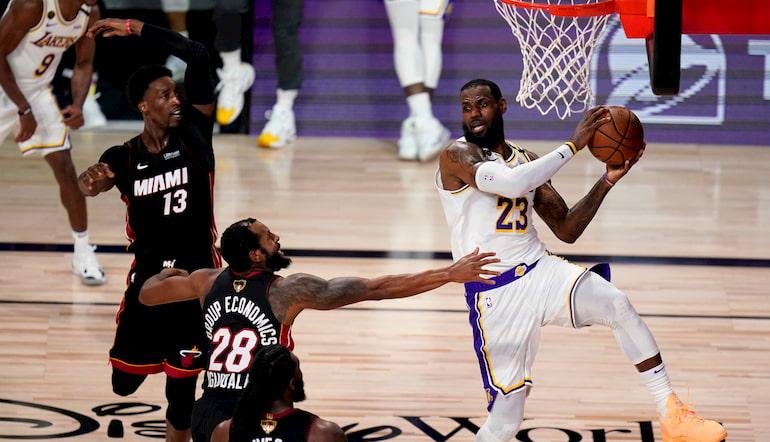 Basketball is a team sport, but a team sport unlike most others. One player can influence a team more than in soccer, American football or cricket - and this has a significant impact on NBA betting odds.

A lone superstar should elevate their team, capable of winning games almost single-handedly. The greatest basketball players can do this in a way unlike the best NBA coaches; you cannot compensate for leadership on the court.

NBA odds can shift substantially with the arrival or departure of a star. Those in the discussion as one of the greatest players ever have a larger impact still, altering the entire status of a franchise.

There are several locks for a top 10 NBA players of all-time list. The top two are set in stone, and a couple of others are guaranteed to hover between three and seven.

Beyond that, though, there’s a larger group who have a case for a top 10 berth.

Is it controversial to put a player with a resume like Hakeem Olajuwon on this list? Plenty would prefer to see Shaquille O’Neal.

The Dream is perhaps underrated because of the timing of his career, but there’s an argument that he’s the best two-way centre to play the game.

The late, great Kobe Bryant was the face of the NBA after Michael Jordan departed. He formed an unbeatable duo with Shaquille O’Neal and won two titles alongside Paul Gasol to end the noughties.

Kobe was an idol. He has a fan base stronger than many franchises. It is a divisive NBA legacy, though. Some throw him into the top three, others have him in the teens. Ninth feels a good compromise.

The most decorated player in NBA history, Bill Russell was a pioneer off the court, an iconic figure on it and an 11-time NBA champion.

Russell might not have been an offensive force like his long-time rival Chamberlain, but he was a defensive menace and a five-time league MVP.

Like Wilt Chamberlain, comparing Russell to players from later eras isn’t straight forward. There were fewer teams in his day, but leading such a spectacular NBA dynasty deserves a place in the top 10.

Throughout his career, he was elite at both ends of the floor, and became an immediate star after being selected first overall in 1997.

Many would have The Big Fundamental in the top five – there’s a certainly a case for that.

The three titles and three consecutive MVPs speak for themselves. Larry Bird’s career might have been hampered by injuries late on, but he retired as the greatest small forward of all-time and one of the best shooters ever.

Bird was a complete player. A smart defender, he racked up the steals and anticipated opponents superbly. He was an efficient shooter, and an excellent playmaker from the perimeter.

Bird was a lock for top 10, and could have been as high as four.

Magic brought flair to the basketball court, he won with swagger, he won playing some of the most entertaining basketball in the history of the NBA.

A 6’9 point guard who developed a shot through his professional career, there will never be another Magic. He retains the status of greatest point guard ever, and it’s hard to see that changing any time soon.

No player has dominated the league quite like Wilt Chamberlain. Sure, he was only a two-time NBA champion, but Wilt The Stilt is on a different planet when it comes to scoring records, rebounding and even has an assist title to his name.

Chamberlain’s size and athleticism made him a near-impossible opponent and forced the league into several substantial rule changes.

There was no answer for his scoring – the averages he managed across seasons look as good as unbreakable even as offence has increased.

The different era, generally lower standard, makes Chamberlain’s placing on a list like this a controversial topic. Fourth feels fair.

The most MVPs, the most All-Star selections, six rings, and a trademark move as famous as any. Kareem Abdul-Jabbar played in three decades and retired as the leader in several NBA stat categories.

Pat Riley, Isiah Thomas and Julius Erving all determined Kareem as their number one all-time. He shouldn’t be overlooked in the LeBron vs Jordan discussions.

An extraordinary athlete capable of some of the best slam dunks, as ferocious a competitor as any sportsperson ever. Michael Jordan’s six rings, the neat perfection of a 6-0 Finals record, is the bedrock of any GOAT conversation.

There was a certainty to the success of the Chicago Bulls when Jordan was involved. He was inevitable.

The legend of MJ is so much bigger than winning championships, he is a demigod for millions worldwide, a figure who embodies sporting celebrity status, who was truly bigger than the NBA.

Did LeBron James’ fourth ring in the Orlando bubble take him past Jordan? How much more does he need to achieve to cement himself as the GOAT?

James will finish his career with the most points all-time. He has four MVPs, and perhaps should have more (he’s finished in second or third on seven other occasions).

Every time his ability to stay at the pinnacle of the sport is questioned, he proves that notion wrong. LeBron is still the best player in the NBA, as has been the case for at least a decade.

His legacy can be divisive, but there should be no doubt that he’s top two all-time. The case for James as number one continues to build.

Steph Curry and Kevin Durant are the obvious names that come to mind. How the Warriors and Nets fare over the next couple of years will decide their standing – ESPN had the former teammates 13th and 14th in their 2020 top 74 players of all-time.

Others are earlier in their careers, and the potential path to top 10 status. Luka Doncic has that ceiling, as does back-to-back MVP Giannis Antetokounmpo. Nikola Jokic can be put in that group, too.

Follow 888sport’s online betting to keep up to date with the progress of the next generation of players throwing themselves into the greatest ever debate.