Who makes our list of the greatest starting five in NBA history? Scroll down to read more... 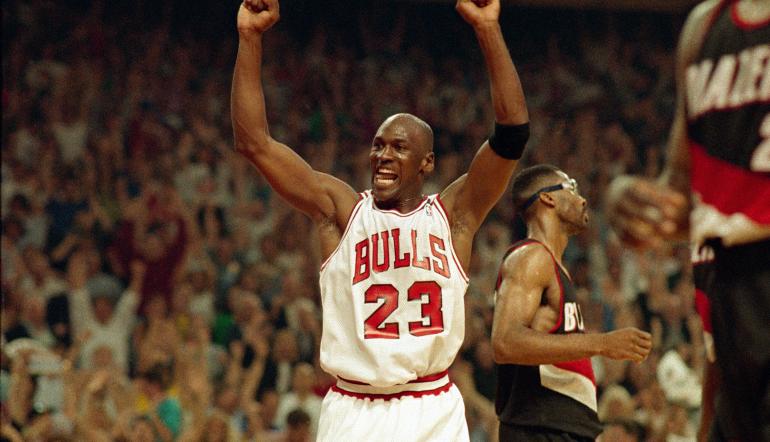 Picking a ‘greatest ever’ team starts off with a lot of questions.

For this exercise, let’s assume this is a team that will somehow fit together on the floor. Instead of just collecting a couple of bigs, a point guard and two wings, we’ll split this into a five that would at least make a little bit of sense together.

So, for that we need shooting, paint protection and a bit of rebounding.

They’ll be playing in the modern NBA, and filling up the best NBA venues. Interior defence isn’t as key as it once was, and rebounds will be longer because of the barrage of three-point shots.

The onus is on floor spacing as – unlike much of NBA history – there will be a three-point line, which leads us perfectly onto the point guard.

Steph Curry changed the NBA, and he’s the ideal point for this team of superstars.

Curry showed he can operate off the ball while sharing the floor with Kevin Durant and, as we witnessed in the 2019 NBA Finals, can score even when the defence is entirely focussed on him.

Magic Johnson, John Stockton and Oscar Robertson all have a solid claim to the position, but none changed the game quite like Curry. The NBA in 2019 is the way it is because of Curry – and his splash brother Klay Thompson.

His brilliance is all-too-often taken for granted. Curry didn’t make our list of NBA players to watch, but maybe he should have done. On 10th October, Curry became the first player (since some guy called Steph Curry) to hit 40 points in an NBA preseason game.

He’s peerless and has demonstrated he can play on a team of superstars like this one. Drawing defenders up near halfcourt, Curry will provide plenty of space for his teammates to play.

For all the talk about fit and three-point shooting, there’s no way you can leave Michael Jordan off this team.

The 14-time All-Star shot 32.7% for his career beyond the arc, but that’s not enough to outweigh the rest of his game. Alongside the vulnerable Curry, Jordan’s defence would be invaluable.

Dwyane Wade might have been a better complementary piece, a section of NBA Twitter would argue for Kobe Bryant. It’s all Jordan’s, though, and it isn’t all that close. He can guard the opposition’s best player, allowing Curry to preserve energy.

The second of the two locks on this team, there will be no Michael Jordan versus LeBron James debate here.

King James’ Lakers are the second-favourites for the NBA title in 888sport’s latest NBA odds. James already has three titles to his name, including the greatest ever NBA Finals comeback, along with four MVP awards and the second-best PER in NBA history.

LeBron will be this team’s primary ball-handler. With a stretch four and Curry distracting the defence, James has shooting around him as required.

The fit alongside Jordan isn’t perfect, but I think the two greatest players of all-time would find a way to make it work.

Remembered as a small forward, Larry Bird could fill in as a stretch four in the modern NBA.

A career 37.6% shooter from deep, the Celtics legend would get more than his fair share of open looks as defenders chased after Curry and blocked driving lanes for LeBron.

Standing at 6’9”, Bird – a very good defender – could deal with opposing fours and would be comfortable going out to the perimeter. Very few current NBA teams would be able to outsize LeBron and Bird.

Bird ranks 21st all-time in win shares per 48, ahead of Julius Erving, Bill Russell and Kevin Garnett. He wouldn’t be the star of this team, but he could slot into that role nicely while LeBron brings the ball up the floor.

The arguments for Russell, Shaquille O’Neal, Kareem Abdul-Jabbar, Hakeem Olajuwon and even Tim Duncan (who could also edge out Bird) are very strong.

Kareem is the only player in NBA history with more win shares than Chamberlain. Wilt The Stilt’s 100-point game in 1962 is one of the greatest sporting achievements.

He averaged over 50 points per game that season and finished his career just shy of 23 boards per game. Chamberlain’s records are almost unbreakable...

He’s not going to be shooting threes, but he’ll provide much-needed paint presence at both ends of the floor for this team. He might just catch a couple of lobs from LeBron, too.