Do you agree with our 5 greatest NBA Slam Dunk Contest efforts? Scroll down now for our favourite basketball performances! 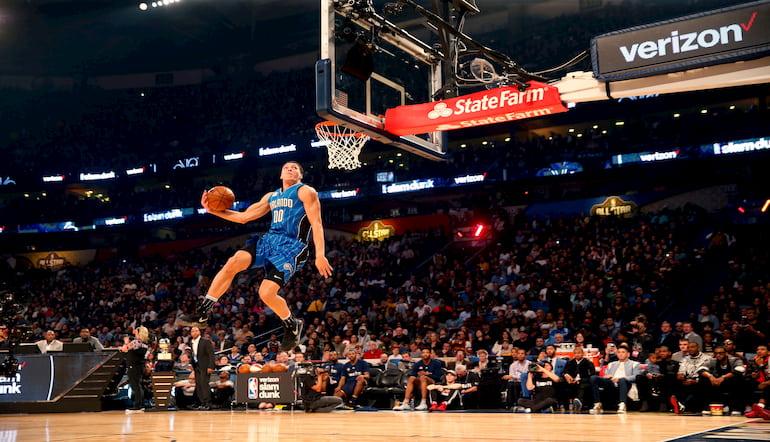 The NBA dunk contest is a display of the world’s greatest athletes performing inventive, and sometimes barely believable, slams. Scored by a panel in the arena, the dunk contest is arguably the headline event of NBA All-Star Weekend.

Howard is a former winner and Gordon has entered before (more about that later).

The Thunder’s Hamidou Diallo became dunk champion in 2019 with a leap over Shaquille O’Neal.

John Collins paid tribute to the Wright Brothers in the first round, and Miles Bridges perfected a 360 with a Larry Johnson Hornets jersey on. Dennis Smith Jr. advanced to the final with a jump over J.Cole, but he fell short against Diallo in the final.

Will any of this year’s contestants write their place in dunk contest history? Here are five of the greatest ever dunk contest performances…

It was the first ever dunk contest in 1976, and perhaps the most famous dunker in NBA history made his mark. The format was different, taking place at half-time in the ABA All-Star game and with restrictions.

Erving had to attempt one from a standing position and one from ten feet away from the cup before being allowed three freestyle attempts.

These all had to be completed within two minutes. Erving went last, following George Gervin, Larry Kenon, Artis Gilmore and David Thompson.

Dr J charged from one end of the court to the other, ball gripped firmly in his right hand. Taking off from the free-throw line, Erving erupted into the McNichols Sports Arena air and delivered an emphatic slam.

The dunk contest wouldn’t have been what it is today without Erving’s showstopper in Colorado.

A showdown between Vince Carter, his cousin Tracy McGrady and Steve Francis puts the 2000 dunk contest among the greatest in history. Carter was the eventual winner, and widely considered the best participant ever.

The event was littered with show-stoppers, and Carter delivered several of them. A brace of 360-windmills and a honey dip were special, but it’s the between-the-legs dunk off a bounce pass from his cousin that stands out.

The commentary was perfect. Carter’s celebration is iconic and the reaction of one of the best arenas in basketball was fitting of the moment.

Despite appeals from sections of the NBA media, Carter will not be appearing at the 2020 dunk contest in Chicago.

A point of dunk contest controversy, plenty of NBA fans would tell you Aaron Gordon should have won in 2016. It might have been the best dunk of competition, but he did it early in the event and it perhaps counted against him.

Mascots have been used in contests over the years. Gordon produced the best of all by jumping legs-first over Stuff the Magic Dragon.

He grabbed the ball from the mascot as he passed, transferring to his left hand for an earth-shattering windmill slam.

The most stunning dunk in contest history, perhaps. Gordon was unfortunate to finish second, but he’s heavily favoured to make up for that in 2020.

Only six players have won the dunk contest two or more times. Chicago’s Zach LaVine is one of them.

It was in a Timberwolves uniform that LaVine won the dunk contest, however, lifting the trophy in 2015 and 2016. The latter of his triumphs came following an incredible head-to-head with Aaron Gordon.

Pressured by some outrageous stuff from Gordon, LaVine had to produce his highest level of athleticism to execute a magnificent dunk for a perfect 50 and a second dunk contest crown.

With shades of Erving and Jordan, LaVine took off from the other end of the floor, exploding from the free-throw line and putting the ball between his leg, unleashing an effortless slam.

LaVine made it look so easy. His dunk contest days may be behind him, but the Bulls guard is one of the most thrilling dunkers in the NBA.

The 1987 dunk contest saw Michael Jordan pick up the first of two titles, with the second coming a year later.

Jordan’s hangtime and ability to pull off outrageous dunks is well known. While his 1987 performance didn’t quite match the game winner in Space Jam, it places among the best.

Jordan registered a 50 with his kiss-the-rim dunk in 1987. Curving his approach along the baseline, he took off into the atmosphere, apparently levitating around the rim as he adjusted his body shape and double clutched.

His head was right at the cup by the time he threw it down. It didn’t have assistance or props like others. It was pure athleticism and technique from His Airness.