Conor McGregor net worth figures have the Irishman as one of the richest athletes in the world - but just how much is McGregor worth? 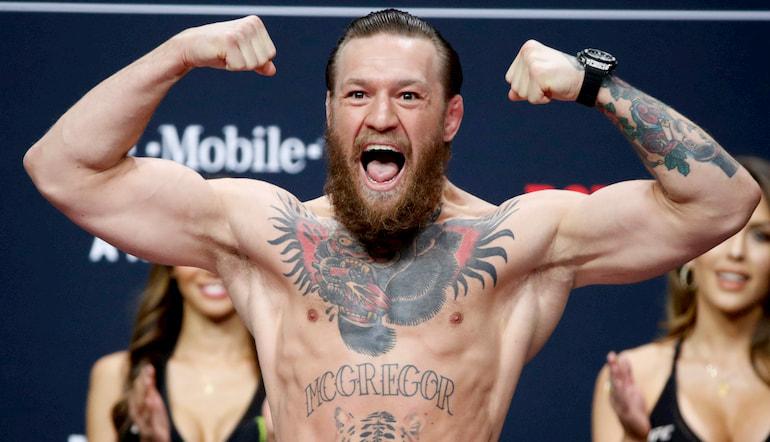 Conor McGregor is one of the biggest stars in sport. You don’t need to be a UFC betting expert to know that the Irishman is a big draw in the MMA world.

Since signing with the UFC in 2013, McGregor has enhanced his brand and reputation as one of the most vocal sportsmen on the planet – Notorious is 100% box office.

Conor McGregor net worth figures put him in a select group of athletes, with the UFC star ranking alongside the likes of Roger Federer, Tiger Woods and Lionel Messi.

Without further ado, it is time to look at McGregor’s UFC career and his life away from the Octagon. Is the Irishman the biggest personality in sport?

Conor McGregor is not married. He has been in a relationship with Dee Devlin since 2008 after meeting in a nightclub and the two have been inseparable ever since.

Devlin is often credited for McGregor’s success, with the Irish businesswoman sticking with him during the lowest points of his career – both in and out of the ring.

Devlin wouldn’t look out of place alongside the hottest UFC ring girls and the couple have two children together, with Jack born in May 2017 and Croia in January 2019.

In August 2020, McGregor announced that he had proposed to Devlin and the two are due to be married in the near future.

McGregor has fought 12 times in the UFC, losing on just two occasions – firstly to Nate Diaz before suffering defeat against Khabib Nurmagomedov.

If you look at McGregor’s MMA career as a whole, the Irishman has won 22 of his 26 fights since turning professional. 19 of those victories came by way of knockout.

During his time in the UFC, McGregor has won UFC titles at featherweight and lightweight level – making him one of the most versatile champions of his generation.

One of the biggest names in UFC history, McGregor has a hardcore following on social media and the Irishman is popular all around the world.

With a hefty 8.4 million followers on Twitter, McGregor is active on the platform and works hard to push his new business venture, Proper No. Twelve Irish Whiskey.

In terms of follower numbers, McGregor is even bigger on Instagram. Notorious has 37.8 million followers on Instagram – making him one of the most popular UFC stars.

Again, McGregor uses the platform to primarily push his whiskey venture but also shares images of his family, past fights and more.

McGregor is very active on Instagram, posting at least once per day and updating his story on a regular basis.

Tattoos are part and parcel of Conor McGregor’s persona and the Irishman now has at least eight tattoos on his body – all with different meanings.

From Arabic writing on his left heel to the epic gorilla tattoo on his chest, each tattoo is very important to McGregor for different reasons.

He even has his own surname and nickname tattooed on his body, stating that he just liked the design and how it looked in stencil writing on his abdomen.

Known for being particularly vocal in the UFC world, there is an array of Conor McGregor quotes that stand out – however there are our favourites:

How Much Is Conor McGregor Worth?

According to various sources, Conor McGregor wealth stands at an estimated £89 million.

Reports estimate McGregor’s earnings between 2019 and 2020 worked out at £35 million – making him one of the richest athletes on the planet.

Conor McGregor net worth figures are based on estimations and UFC career earnings, as well as his profits and wealth from Proper No. Twelve Irish Whiskey.

How Old Is Conor McGregor?

How Tall Is Conor McGregor?

Conor McGregor is 1.75m tall. At 5 foot 9 inches, the Irishman is around the average height of lightweight and featherweight fighters.

When Is Conor McGregor’s Next Fight?

Conor McGregor will fight Dustin Poirier at UFC 257 on 23rd January 2021. The Notorious defeated Poirier at UFC 178 in September 2014 and he will look to secure another victory in the Octagon.

Conor McGregor has announced his retirement on three separate occasions, most recently in June 2020.

However, McGregor has now come out of retirement to prepare for a comeback fight with Dustin Poirier at UFC 257.