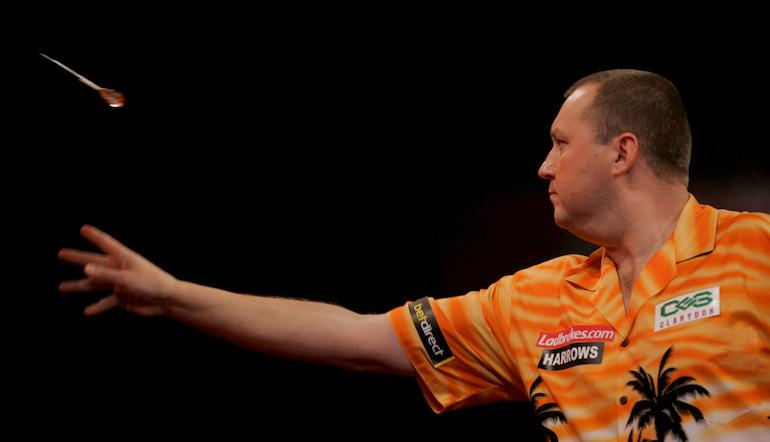 Nowadays, darts is unrecognisable compared to 20 years ago.

From live darts betting odds on the Premier League to the hype surrounding darts walk on songs, the sport has evolved and tungsten fans follow darts news all year round.

The biggest darts event of the year is the PDC World Championship, with an incredible £2.5 million in prize money up for grabs.

Michael van Gerwen, who has one of the best darts walk on songs, heads the betting for this tournament.

The crowd plays a major part in modern darts. Whether that is hyping players up on the way to the oche or celebrating a nine dart finish, darts relies on crowd interaction.

Without further ado, it is time to look at our top five best darts walk on songs. Keep an eye out for these darts walk ons during the upcoming PDC World Darts Championship.

Probably the most iconic darts walk on song of the modern era, Wright makes his way to the stage with Pitbull’s Don’t Stop The Party pumping the crowd up.

He reaches the stage but his darts walk on isn’t finished there. The Scot dances across the entire stage in a bid to excite the darts fans in attendance.

Nicknamed Snakebite, Wright is one of the biggest characters in the sport and his darts walk on is an iconic part of his act.

Seven Nation Army is a song linked to a number of famous sport entrances and it has been the choice of ‘Mighty’ Michael van Gerwen since breaking onto the scene.

Widely regarded as one of the best darts players of all-time, Van Gerwen’s darts walk on is particularly poignant because of the popularity of the White Stripes song.

If everything goes to plan, we could be seeing the Van Gerwen walk on plenty of times at the 2021 PDC World Championship.

A two-time PDC world champion, Lewis is one of a few players to change their darts walk on song in recent years.

‘Money for Nothing’ by Dire Straits was his darts walk on song but Lewis now comes onto the stage to Papas Got A Brand New Pigbag.

This is one of the more upbeat darts walk on songs and Lewis often receives a warm welcome because of this switch.

Now known as the ‘Queen of the Palace’, Sherrock walks onto the stage to Katy Perry’s Last Friday Night.

While not the most intimidating darts walk on song choice, it is synonymous with Sherrock and her exploits at the 2020 PDC World Championship.

Nicknamed ‘the Wizard’, Whitlock pays homage to his native Australia with his darts walk on song, Down Under.

The Men At Work track is known all around the world and darts fans can be seen belting out the lyrics at every televised event.

The 2010 PDC World Championship runner up has struggled at the Alexandra Palace in recent years but he is still one of the most popular figures in the sport.

Darts fans will remember the Ted Hankey walk on theme while Raymond van Barneveld’s walk on music is a hit known around the world.

Here, we look at three of the best darts walk on songs from retired players, starting with 16-time PDC world champion Phil ‘The Power’ Taylor.

In terms of longevity, nobody can match the great Phil Taylor. His choice of walk on song, The Power by Snap, only enhances his legendary status in the sport.

While not the most energetic en route to the stage, Taylor’s grand entrance and dramatic version of the track helps build anticipation.

Taylor’s decision to retire was probably right – the 16-time world champion went out on a high and nobody will dare take The Power’s darts walk on song from him.

If this was a list of the most iconic darts walk ons, Wayne Mardle’s entrance to the stage would sit at the very top of the list.

The legendary Hawaii Five-O theme always gets the crowd excited and Mardle was the master at playing down the occasion – making light of any situation.

While he failed to win the PDC World Championship throughout his career, his darts walk on lives long in the memory and he is now the voice of darts in the commentary box.

If ever a darts walk on song summed up a player, it is Eye Of The Tiger by Survivor for five-time world champion Raymond van Barneveld.

A fan favourite throughout his career, Barney’s walk on was eagerly anticipated at every major event and darts fans would pay homage by wearing Netherlands shirts.

Try stopping darts fans from a rendition of ‘Barney Army’ after the music stops playing over the tannoy – it is just as iconic as the Dutchman’s legendary walk on.