What Are The Biggest Darts Tournaments For Prize Money? 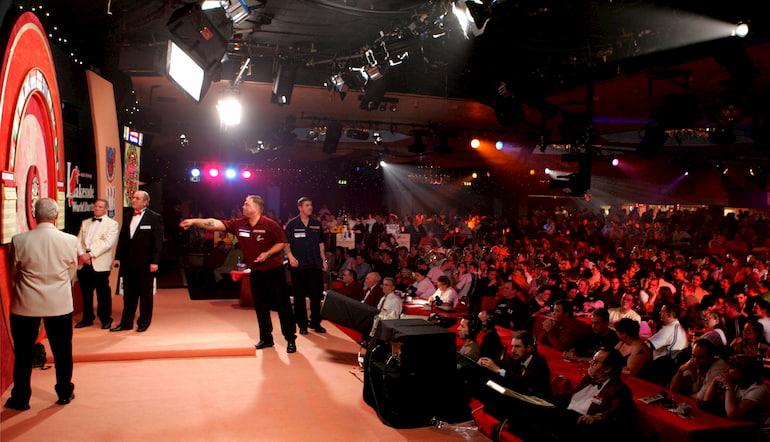 With a simple scoring system and limited set of rules, darts is one of the easiest sports to follow.

You don’t need to be a tungsten expert to get involved with darts betting and a packed schedule of tournaments can keep punters entertained.

The PDC World Championship is the darts competition that everyone wants to win.

As of 2020, the prize fund stands at a colossal £2.5 million, with £500,000 going to the winning player. Winning the World Championship is the dream for every aspiring darts player.

Some of the greatest players of all-time have flourished at these tournaments.

Take Phil ‘The Power’ Taylor for example – he had won an incredible 16 PDC World Championship titles when he retired following the 2018 event.

Without further ado, it is time to take a look at the top 10 darts tournaments for prize money.

Follow the latest darts betting news, tips and odds with 888sport and be sure to keep an eye on the darts tournaments schedule throughout the year.

The most lucrative darts tournament on the planet is the PDC World Championship.

With an estimated £2.5 million on offer throughout the competition, the pressure is unrivalled and even the best darts players in the sport can crumble on the Alexandra Palace stage.

The winner of the PDC World Championship will need to have a quiet Christmas and New Year but that is a small sacrifice with £500,000 awarded to the winning player.

Peter Wright is the defending world champion but will he retain his title at the end of the year?

One of the most exciting competitions to follow, Premier League Darts has had its fair share of drama and entertainment over the years.

From February until May, Thursday nights are reserved for a night in front of the television and high octane tungsten action.

With £250,000 available to the winning player, Premier League Darts finals night is up there with the highlights of the darts calendar.

Traditionally held at the Winter Gardens in Blackpool, the World Matchplay ranks third for total prize money. From 2020 onwards, the competition will move to Milton Keynes but the format of the tournament will remain the same.

Dimitri Van den Bergh scooped the £150,000 jackpot for winning the 2020 World Matchplay – and the top darts players will be hunting for his title next year.

The £700,000 prize fund is one of the highest in darts and the event ranks as one of the greatest darts tournaments of the year.

The Grand Slam of Darts takes place in November and it is usually the last major tournament before the PDC World Championship.

This is one of the most popular competitions for darts betting tips and is often a good indicator ahead of the World Championship.

With £125,000 available to the winning player, the Grand Slam of Darts is contested by some of the greatest darts players of all-time.

Gerwyn Price has emerged victorious in each of the last two editions and he could be the one to beat later this year.

Darts aficionados will be well aware that the World Grand Prix is a very unique competition.

To this day, it is the only televised event in which players must start and finish each leg on a double, which only enhances the drama and tension.

Some of the best darts matches of all-time have taken place at the World Grand Prix – it truly is a festival of tungsten.

The upcoming competition will surely live up to the hype, particularly with a tasty £110,000 awarded to the winning player.

The Players Championship is now one of the most coveted events in darts.

Organisers opted to increase the field size from 32 to 64 in 2016 and the tournament has continued to thrive, so much so that there is now a total prize pot of £500,000.

Van Gerwen, arguably the best darts player ever, has won this tournament in four of the last five years and the Dutchman is the most successful player in Players Championship history.

He will be looking to pocket another £100,000 in the next edition of the tournament…

The European Championship allows the top European players to go toe-to-toe with the best ranked players according to the PDC Order of Merit.

Only three players have been lucky enough to hit a perfect nine-dart finish at this event – it is one of the trickiest tournaments on the darts calendar.

The lure of £120,000 to the 2020 European Championship winner should tempt the best darts players into giving it their all.

Often referred to as the FA Cup of Darts, the UK Open gives youngsters and amateurs a rare chance to mix it with the professionals.

You won’t get any marks for guessing 888 prediction tips on some matches but shocks are aplenty.

If you look at the UK Open winners, you will see many of the top 10 darts players of all-time featuring on the list.

£100,000 to the winner is very reasonable indeed and it remains a fan favourite event, both for attendees and those watching on television.

The only team darts tournament on this list, the World Cup of Darts is different to other leading events on the calendar.

Now one of the most entertaining darts events around, it is an annual competition and fans love the unique format of the World Cup of Darts.

Each winning player is awarded £35,000 for winning the competition and the Netherlands are the most successful nation in World Cup of Darts history with four triumphs.

Could we see Van Gerwen and co claim victory again in 2020?

Established in 2013, the World Series of Darts is made up of multiple tournaments all over the world.

Since 2015, the format has changed slightly with a finals competition held in November – and the World Series of Darts is one of the most eagerly anticipated events.

Van Gerwen was crowned World Series of Darts champion in 2019, with the Dutchman pocketing a tasty £70,000 in front of a packed-out Amsterdam crowd.

The 2020 finals night will take place in Salzburg and is likely to be one of the best darts betting tips events of the year.