Eddie Hearn Net Worth - How Much Is The Matchroom Boxing Promoter Worth?

Latest estimates value Eddie Hearn's wealth at £45 million. But as the boxing promoter continues to sign new deals, we want to know - how much is the Matchroom chief worth? 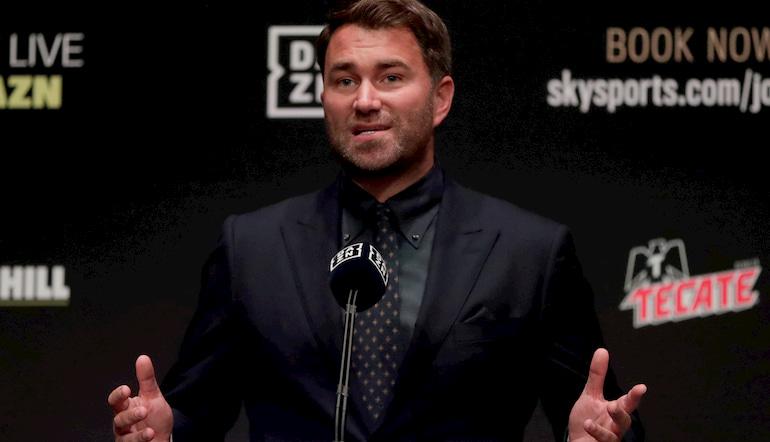 Boxing betting fans will know all about Eddie Hearn. He is your typical pantomime villain – the people love to hate him but he is great for the sport.

Hearn’s passion for boxing is eclipsed only by his thirst for money. Hearn has been very successful, building up a strong portfolio and Eddie Hearn net worth figures are rock solid.

How Much Is Eddie Hearn Worth?

You don't need to be a huge boxing fan to know who Hearn is. Eddie is now more of a sports personality than purely a boxing promoter, and anyone with social media will have seen the Eddie Hearn memes...

So, how much is Eddie Hearn worth? We look at the latest Eddie Health wealth estimates, while also discussing the boxing promoter’s life away from the ring.

Eddie Hearn wealth figures continue to increase, with net worth estimates now around the £45 million mark in 2021.

The dominant force in boxing promotion, Hearn has the bulk of the market share and the Eddie Hearn net worth numbers are expected to rise throughout the year.

While Anthony Joshua net worth numbers may surpass Hearn later this year, the promoter will ensure that he receives his fair share whenever AJ is fighting.

Hearn and Matchroom are now working with DAZN, with the two parties signing a £1 billion agreement to stream boxing fights around the world back in 2017.

Although he isn’t the most followed sportsperson on social media, Eddie Hearn is active on Twitter – and he has amassed over 980,000 followers since joining the platform.

Hearn has been vocal on Twitter over the years, informing boxing fans of upcoming fight news and boxing contract negotiations.

Furthermore, he has supported plans for the release of a new boxing video game though talks of a new Fight Night game have quieted down in recent months.

Not afraid to speak his mind and call fighters out, Hearn is one of the best in the business and he uses his social media channel to his advantage.

When you have Eddie Hearn net worth figures, you can own any property you want. Eddie owns a number of properties but his expressionist house in Los Angeles is stunning.

However, the famous property associated with the Hearn family is in Essex. Now the home of Matchroom, Barry Hearn purchased the property around 30 years ago.

While it cost a hefty £200,000, that is a meagre sum of money compared to its current value and it is now the home of boxing, snooker and darts.

With a gym, swimming pool and huge garden onsite, Hearn’s fighters and athletes have access to some of the best facilities in sport.

Eddie Hearn actually held a range of ‘Fight Camp’ nights in the garden during 2020, with the sufficient requirements and space to televise these unique boxing events.

Eddie Hearn’s other half is the beautiful Chloe Hearn. The couple have had two children together; Isabella, born in 2010, and Sophia, born in 2012.

Chloe is the co-owner of a beauty salon, Chloe’s Beauty Bar, in Brentwood. While her wealth is nothing compared to Eddie Hearn net worth levels, Chloe more than does her bit.

A committed mother and loving wife, Chloe Hearn is the perfect sidekick to the famous boxing promoter. Keeping Eddie in check must be difficult at times!

Eddie’s father is Barry Hearn, a former accountant who is the founder of Matchroom Sport. According to sources, Barry started the foundation to benefit his sports mad son.

While not as famous as Eddie, Barry Hearn net worth figures are substantial and he is known around the world – particularly with boxing, darts and snooker fans.

Eddie Hearn failed to make it past sixth form at Brentwood School, though Barry requested the school management to allow Eddie to stay on for his sporting skills.

Barry Hearn is an iconic figure in the sports betting world and his impact in Eddie’s success should not be understated. Eddie himself is always the first to acknowledge his father’s input.

Standing at 6 foot tall, Eddie Hearn is actually taller than the average British male – though he often looks much shorter stood next to his heavyweight fighter clients.

Hearn keeps himself in fantastic shape, putting the same effort and commitment into his own body as he does with many of his fighters.

He is his own harshest critic at times, commenting on minor weight gains but we think Hearn is in tiptop condition. It would be great to see him in action in the boxing ring!

The Eddie Hearn Oh Go On Then clip has gone viral, largely thanks to Twitter account @NoContextHearn.

You could argue that Hearn himself knows that he is a meme and now plays up to the camera during interviews but that only enhances the comedic value.

There are plenty of Eddie Hearn GIFs out there – it is easy to spend many hours flicking through the countless clips of Hearn floating around on social media.

So what are you waiting for? Let us know your favourite Eddie Hearn GIF with a tweet to us at @888sport!