What is the best England football meme on the internet? Join our football expert as he looks at the top England memes on social media! 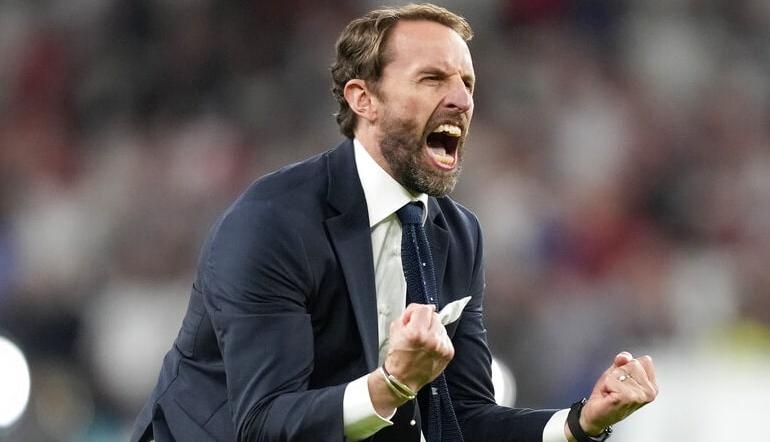 Few instances unite a nation more than a major footballing tournament and when England are involved, social media is usually ablaze with memes, gifs and hot takes.

It can be a lot of fun to scroll down a timeline when Harry Kane and the lads are playing. Frankly, it’s sometimes more entertaining than the actual football.

The tone of this content can differ dramatically depending on how the Three Lions are faring, but whether it’s celebratory, insightful, or angry, typically humour lies at the heart of it.

We thought therefore, it was about time that we rejoiced in some of the best England memes in recent years, some of which take us right back to balmy summers of optimism, when we really believed football was ‘coming home’. Spoiler alert: it didn’t.

Isn’t it annoying when people talk about songs or films ‘working on different levels’? It sounds a bit clever, but it also doesn’t really mean anything.

Yet here is a deceptively straightforward tweet that covers so many bases.

First off, when posted, England were busy competing in a Euro semi-final against Denmark, after reaching that juncture amidst all manner of criticism of Gareth Southgate’s team selections from a country of armchair experts.

We thought we knew better than one of the most successful England football managers of all time. We didn’t.

And in this context, the meme also hits plenty of nails on heads when broadening our scope to football in general.

It’s also a perfectly chosen pic too, with snacks and pyjamas de rigour when shouting at Southgate to make the substitutions we want.

Me at home telling the players what to do #ENGDEN pic.twitter.com/6W4KDsw42r

Playing Up To Stereotype

It is July 2018 and England are about to take on Sweden in a World Cup quarter final.

With the Three Lions just three games away from replicating their fabulous feat from half a century earlier, understandably a good deal of excitement is in the air, with belief growing that the greatest prize of them all is up for grabs.

Celebrating a trope that pops up a few times on this list, we are under the firm impression that football is coming home.

Here stereotype is deployed and wonderfully so. As rich and diverse a country Sweden is, let’s face it, the only viable options for parody were to reference IKEA or make a pun on an ABBA song title. The right one was chosen.

Three years after England suffered semi-final heartbreak in Russia, they were once again deep into a major tournament, once again making a nation believe something very special was possible.

The online betting markets were awash with punters backing Southgate’s men to go all the way. Optimism was sky high.

Only alas, someone always has to take things too far, and ahead of a tricky clash with Croatia in the last four, along came what is seemingly these days a compulsory premature tattoo plastered around the internet.

This Scottish lady was strangely unsympathetic when the ink ultimately lied.

A Classic Of The Genre

Comedic pie charts have been a staple of the meme game for many a year and any best of list simply wouldn’t be the same without one.

This example is clean, immediately apparent, and all the more impactful for it. A marvellous piece of work.

When this meme appeared, England had just dumped their historical foes Germany out of Euro 2020 so unsurprisingly timelines were choc-a-bloc with pictures of beach towels draped over aeroplane seats.

Funny for sure but also a bit obvious dare we say?

This tweet banged because it instead focused on the hero of the hour, the striker who may not have scored the most goals for England in the tournament – that honour fell naturally to Kane – but who time and again was the difference-maker.

Raheem Sterling for England during the Euros pic.twitter.com/RB82AwNnPm

One of social media’s biggest appeals lies in its immediacy. A forward scores a worldy and you can respond in an instant. A thought can be shared in the time it takes to have it.

The internet though can also be timeless, and here is a perfect illustration of that.

Because last summer England lost to Italy in a Euro final and one of its enduring images was of the veteran defender Giorgio Chiellini cynically grabbing hold of Bukayo Saka. Many memes were created at the time, the bulk of them amusing.

Then, six months later a completely unrelated video went viral, showing a guy ‘accidentally’ slipping on ice and pairing these two events together was brave given how one was ancient history by the internet’s standards.

It was a gamble that paid off handsomely.

Local Boy In The Photograph

Ah, the Harry Maguire meme, a thoroughly British cultural monument that’s up there with Nelson’s Column and Made In Chelsea.

So widespread was this pic shared that picking out just the one favourite version was a difficult task. This effort skewers the player’s cocky pose and northern demeanour better than most though.

You can really imagine the Manchester United defender saying precisely this.

"I like all sorts of music really, from Kasabian right through to The Stereophonics." pic.twitter.com/JDqHm1XLZc

Not an original meme in the strictest sense, but still, this is a minor work of art because it’s all there on the page, rendering a description of it redundant. Let’s do so anyway.

After Harry Maguire made a big show of scoring against Albania recently, defiantly cupping his ears to mounting criticism of his poor form, a clearly appalled Roy Keane naturally had something to say on the matter.

Relaying the news that a Manchester United legend had waded in on a present-day Red and garnishing the tweet with laughing emojis and a #YNWA, well, that’s Twitter in a nutshell.

Not Dead Just Yet

The ‘Stop, stop, he’s already dead’ meme from The Simpsons has become somewhat old hat these days. Over-used and on the cusp of becoming a cliché.

It still has its uses however, and when England recently walloped perennial international whipping-boys San Marino 10-1 it was nigh-on obligatory.

Let’s end on a positive note with a meme that could be hung in the national gallery.

Football odds today have the Three Lions down as one of the favourites to win the World Cup next year. Maybe, just maybe, all those earlier tweets may be proven right after all.

Football Tips
International Football
About the Author
By
Stephen Tudor