Will Euro 2020 be England's time to end 55 years of hurt? We look at England's Euro 2021 chances and the Euros route to the final. 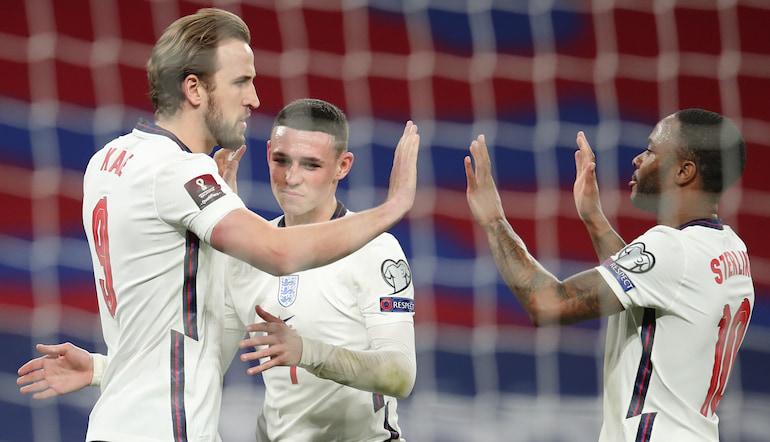 England have been Euro 2020 football betting favourites for the best part of two years now and expectation is growing amongst Three Lions supporters.

The entire nation will be getting behind Gareth Southgate and his players for this summer’s competition – with Euro 2021 now taking place one year after originally planned.

England’s route to the final is set. Can the Three Lions end 55 years of hurt by clinching a first major trophy since 1966? Only time will tell…

According to the latest Euro 2020 odds, England are 5/1 to win the tournament and Three Lions fans will be hoping that Southgate’s men can build on their 2018 World Cup.

Without further ado, it is time to take a closer look at our guide to England at Euro 2020, starting with the official England squad for the competition.

Gareth Southgate is expected to announce the England Euro 2020 squad on May 24th, with the official UEFA squad deadline 10 days before the tournament begins on June 1st.

In a break from tradition, UEFA are allowing teams to pick an extended 26-man squad for the competition and Southgate is likely to select 26 players to make his England Euro 2021 squad.

Come back here for the full England squad for Euro 2020 once Southgate has confirmed his squad for the competition.

England were automatically placed into Group D as one of the qualifying host nations and the Three Lions are clear favourites to top the group.

The Euro 2021 draw pitted Croatia, Czech Republic and Scotland alongside England in Group D and Southgate’s men won’t be taking anything for granted.

England fans will recall the devastating loss to Croatia at Euro 2016 while the Czech Republic toppled the Three Lions in the Euro 2020 qualifying stages in October 2019.

With Manchester City and Chelsea involved in the Champions League final and Manchester United in the Europa League final, the England Euro 2020 warm up games are going to be something of a damp squib.

At least 11 national team players are likely to miss out due to their club commitments but England fans needn’t worry – most of these are likely to feature in the official England Euro 2020 squad.

While it is hardly ideal for England’s preparations, the Euro 2021 warm up matches are not the be all and end all. If nothing else, we at least know that every player involved at club level will be fighting fit.

England have two Euro 2020 warm up fixtures planned ahead of this summer’s competition, with both matches taking place at Middlesbrough’s Riverside Stadium. You can find the Euro 2021 warm up games results below:

So, we know England will face Croatia, Czech Republic and Scotland at Euro 2020 but when will those matches take place?

For those making football prediction picks on England Euro 2021 matches, you can find the full schedule of group matches here:

How far will England go this summer? Only time will tell. The Three Lions have been touted as potential Euro 2020 outright winners but let’s try and take it one game at a time…

England revealed their home and away kits for Euro 2020 back in September – just a couple of weeks before the Nations League meetings with Iceland and Denmark.

As per tradition, the home shirt follows the usual white with a dark blue neck and stripes down the side, with a Three Lions graphic embossed on the jersey.

Rate @england’s new kits out of ??

The away jersey is blue, with clear inspiration from memorable England jerseys of the past. The shirt features an all-over graphic with the Three Lions catching the eye.

While the kits were released before the Nations League matches, England confirmed that the jerseys will be worn by England at Euro 2021.

Football fans following the Euro 2020 TV schedule to a tee will see the England Euro 2021 kit on a regular basis throughout the tournament. Hopefully it’ll be on show in the final!

As of April 8th 2021, the Football Association has told UEFA that there will be 22,500 fans at Wembley for all three of England’s Euro 2020 group stage fixtures.

That equates to 25% of Wembley’s maximum capacity but The Times report that officials are hopeful that 45,000 fans could attend knockout stage matches.

England fans will be keeping a close eye on Euro 2020 Wembley ticket news in the build-up to June’s competition.

This is where the tournament really starts to heat up. In terms of a last-16 opponent, it is likely to be beneficial for England to finish second in Group D.

That is because the Group D winner is slated to face one of Portugal, Germany, France or Hungary in the last-16 round at Euro 2021.

Finishing second in the group will pit England against the runner up from Group E, meaning the Three Lions would face either Spain, Sweden, Poland or Slovakia.

England could still qualify for the last-16 if they finished third in the group but permutations become tricky and they’d be banking on finishing as one of the four best third-placed teams.

If England finish as one of the four best third-place teams:

England’s route to the Euro 2021 final would be tricky this way. Gareth Southgate’s side would face one of: