Fabrizio Romano On Gabriel Jesus And Richarlison: The Brazilian Battle Of North London

Who will come out on top in the Brazilian Battle of North London - Gabriel Jesus or Richarlison? Fabrizio Romano looks at these two South American stars 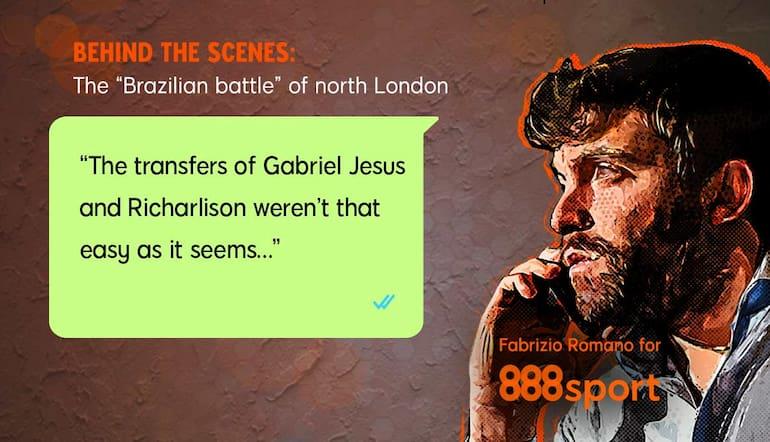 The summer transfer market in the Premier League has been full of surprises so far and many of them have been from... Brazil.

Yes, because there was an incredible battle between London clubs to secure the best Brazilian talent available in the Premier League following the players' decisions to try new experiences.

With many secrets behind the negotiations that brought Richarlison to Tottenham and Gabriel Jesus to Arsenal, two deals completed in early July but far less easy than they seemed.

Arsenal in particular had to face numerous and aggressive competition for Gabriel Jesus: the negotiation began in April when the Brazilian decided to leave Manchester City, he communicated this to the club letting it know that he did not want to extend the contract expiring in June 2023.

So Pep Guardiola gave the green light at his start for a figure close to £ 50m. Since that moment, there has been no shortage of proposals: Arsenal have always been frontrunners but the deal has been in danger several times.

When everything seemed to be closing, in fact, Chelsea tried to enter with a proposal to Gabriel Jesus and his agents: since Todd Boehly took over Chelsea's negotiations, there have been attempts to make offers around and the Blues really tried for Gabriel Jesus.

There was no possibility of a hijack for Tottenham either. But it is not surprising that even the Spurs have tried until the last moment, because the Italian sport director Fabio Paratici is used to negotiating for three or four players at the same time in the same position before completing the agreement with the priority target.

This is a technique he already used when he worked for Juventus and now at Tottenham, useful both for having a plan B in the event that the main target cannot be signed and for disturbing competitors on the market.

In the end, Arsenal completed the deal thanks to a verbal agreement with Gabriel Jesus and his agents; Edu Gaspar's work was crucial, the director of football made the difference to avoid insertions of other clubs thanks to his Brazilian connection with Gabriel and his representatives.

"Gabby will need time to adapt...we want to be at the top of the table" 👀

Mikel Arteta outlines his bold ambitions for this season and admits Gabriel Jesus will be a different striker than he was at Man City pic.twitter.com/sL5rCz6Cb0

Arsenal convinced Jesus with a project of which he would be the main star, unlike Tottenham and Chelsea who saw him as one of the various options for the attack: Mikel Arteta considers Gabriel Jesus a player with enormous potential to express in the next few years.

For this the club has invested £ 45m guaranteed fee plus add-ons for Gabriel to outperform the competition.

But London's battle for Brazilian stars didn't end there. Chelsea in fact tried to hijack Tottenham deal for Richarlison until the last minute of a long negotiation.

During the night before the medical tests that Richarlison then underwent in Brazil with Spurs, Chelsea submitted a proposal of £40m plus a player to be included in the deal for Richarlison, highly rated by Thomas Tuchel as a possible option for the attack of the 2022/2023 season.

Everton's response was negative, as they already had a deal in place with Tottenham for £60m add-ons included.

Chelsea have decided not to match the Spurs proposal and move to other targets, but they have tried seriously for Richarlison in a heated challenge between London clubs that has never stopped throughout the summer.

Fabio Paratici, Tottenham's director of football, managed to seal the deal the following morning with medical tests, documents signed in a hurry and a five-year contract for Richarlison.

Another decisive factor was Antonio Conte, who wanted Richarlison because he was useful for playing with Kane, Son or Kulusevski but also as a back-up for Harry who remains the untouchable star of Tottenham of the present and of the future.

A series of challenges and unexpected twists that animated the summer among London clubs and may not end here ... with many Brazilian stars on the move until the end of a once again crazy and unpredictable market.

Premier League Tips
About the Author
By
Fabrizio Romano