The Antoine Griezmann situation is bizarre - here, Fabrizio Romano weighs in on a delicate yet complicated situation 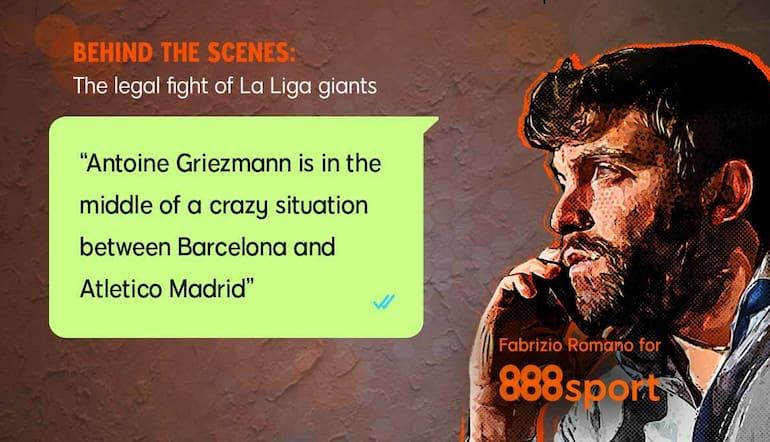 The situation of Antoine Griezmann is certainly one of the most particular at an international level.

Yes, because the French star has been at the center of a worrying and complicated La Liga transfers case for Barcelona and Atletico for weeks: where will his future be? How will the agreement for 2023 be completed?

It all started at the end of summer 2021, when Atletico Madrid and Barcelona reached an agreement for Griezmann: a two-year loan, buy option clause for 2022 but also in addition, a € 40m mandatory clause for Atletico Madrid to sign Griezmann only in case he would have played more than 50% of the minutes in the matches where he is available.

Atletico president Enrique Cerezo on Griezmann: “We have not met with Barcelona nor do we intend to do so. Griezmann story is pretty clear”. 🚨⚪️🔴 #Griezmann

“At the moment we are at the same point, nothing has changed with FCB on Griezmann - same as beginning of the season”. pic.twitter.com/hm0w9gtlj9

This is where the dispute between Barcelona and Atletico arises: the Catalan club claims that having Griezmann played 81% of the minutes in his first year on loan, Antoine should be considered an Atletico player for 2023 with a consequent payment of €40m.

Atletico Madrid instead let it be known that this second season must also be part of the count in the minutes that Griezmann must play, which is why the Frenchman has so far often entered the field from minute 60 onwards so as not to be forced to activate the €40m clause next June.

A very difficult situation to manage because Griezmann is very happy at Atletico Madrid, he loves the club, the city, the fans and would like to give his best for Atleti as he is doing despite this crazy situation.

On his side, Barcelona are demanding € 40m while Atletico Madrid claim that the activation of the clause has not been reached precisely because this second season must be counted in the total of Griezmann's games. Who will be right?

While rumors of possible legal issues have been filtering for weeks to clarify everything between the two clubs, there has been for days the idea of trying to find an agreement in order to avoid even more dangerous situations for the clubs and for Griezmann himself.

The ideal for all parties involved would be to negotiate a lower price for Griezmann and thus complete an agreement in advance, so avoiding Diego Simeone the situation of using Griezmann almost always after the 60 minute.

This would also give Atletico Madrid more solutions on the pitch, and also more guarantees for Barcelona in receiving money for the Frenchman, avoiding reaching 2023 with a situation still in doubt for Antoine that does not fit into Xavi Hernandez's plans.

An agreement has not yet been reached, assured Atletico Madrid president Enrique Cerezo a few days ago; the two clubs are in contact to find a solution but they are not yet at the final stages.

For this reason, there are already many rumors about Griezmann's future, from the Premier League to the solutions in Serie A.

Those close to Antoine guarantee that he is 100% focused on Atletico Madrid, does not want to be distracted by this particular situation and hopes everything can be solved. as soon as possible.

There are no negotiations underway with other clubs, not least because Griezmann's salary is very high and it would complicate everything to include a third club in this story.

First, everything needs to be resolved between Barça and Atletico Madrid, a crazy market situation that has never been heard before and which is also affecting Simeone's choices. But clarity is a priority for everyone.