How Great Can Luka Dončić Become?

One of the brightest talents in the NBA, the sky really is the limit for Dallas Mavericks guard Luka Doncic 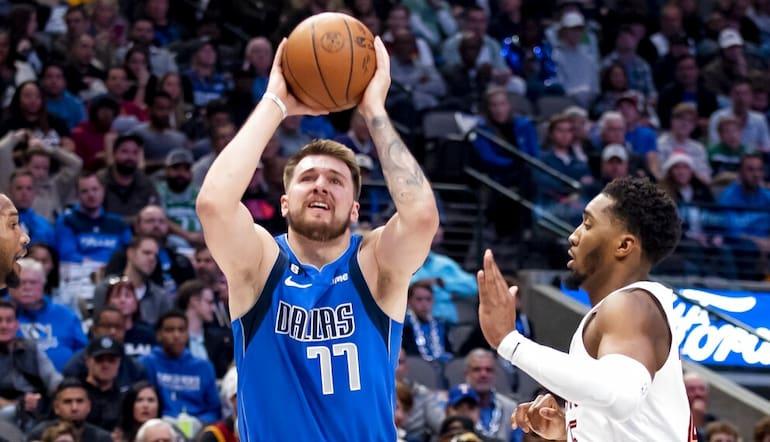 There is a very short list of NBA players who it can reasonably be argued are better than Luka Dončić.

A strong case can be made that the Slovenian is already top three. For a couple of years in a row, preseason basketball betting has made Dončić the MVP favourite.

Already, Phoenix and Sacramento passing on Dončić in the draft is cemented as one of the greatest mistakes in league history.

Dončić has been selected to the All-NBA First Team in each of the last three seasons, a feat only matched by Antetokounmpo over that period.

Having built years of experience in Europe, the usual bedding in time in the NBA was minimal. He does not turn 24 until February, an age when many of the game’s best are still finding their feet at the professional level.

Dončić, in contrast, is a lock for All-Star starter honours each season and a perennial All-NBA First Team selection, who has already led his Dallas Mavericks to the Conference Finals.

Dominant From a Young Age

Very, very few players come into the league and dominate like Dončić has. Tim Duncan was the last player to be selected to the All-NBA First Team in his first or second season.

No other teenager in NBA history has recorded four triple-doubles. Only Michael Jordan and Shaquille O’Neal took fewer games to reach 4,000 points since merger.

If anything, Dončić’s postseason performances have been even more remarkable than his regular season production.

His 42 points in his playoff debut is a record, he’s the youngest player to hit a playoff buzzer-beater, and the first player in league history regardless of age to have 43+ points, 17+ rebounds, and 13+ assists in a playoff game.

Only four other players (Michael Jordan, LeBron James, Kawhi Leonard, Dame Lillard) have dropped 40 in a playoff game and hit a game-winner at the buzzer.

The list of accolades is extensive. Just look at the company Dončić keeps. These are not just All-Star level players, many are top-15 all-time calibre stars, putting him on a trajectory few have been on.

Defence is still a problem. Teams have, and will continue to, go at Dončić in playoff series. The other overriding concern is more of a franchise problem than a Dončić issue – his usage rate is grotestque.

Only five times have players completed full seasons with a higher usage than Dončić’s 2022-23 mark.

Including this season (where Joel Embiid and Antetokounmpo also place in the top 10), Dončić has four of the top 20 higher usage seasons ever.

This playstyle has rarely been effective deep into the postseason, such is the workload it demands.

In the regular season, it enables Dončić to load up on triple-doubles and compete for scoring titles, but it has fairly drawn comparisons to James Harden on the Houston Rockets with the unsustainable level of isolation play.

Dončić is averaging 8.2 isos per game in 2022-23 – only four other players (Embiid, Harden, Shai Gilgeous-Alexander, Durant) are above five.

Like with Harden, there is a question about how Dončić operates off-ball. Does he want to hand over ball-handling responsibilities? After all, his usage was still historically high even when Jalen Brunson was on the roster.

Playing off-ball is one uncertainty with Dončić. How willing is he to cut, screen and take catch-and-shoot threes? Other high-usage MVP candidates have been reluctant to take on such a role even when paired with another star.

The best version of Dončić from a team perspective would see a slightly lower usage with a more diverse offence. In theory, less of a burden offensively should allow Dončić to expend more energy on the defensive end.

He is never going to be Gary Payton, but being more engaged and using his size would make a meaningful difference.

The current construction of the Dallas Mavericks is perfect for Dončić to put up gaudy numbers. For Dončić to lead a team to a title, it is wildly flawed, and it will also provide a severe test for his durability.

If he is to reach his ceiling alongside the all-time greats, Dončić needs a different roster construction and at least one other elite player.

As Dallas’ title price in NBA odds suggests, this team is a work in progress.

After how the Kristaps Porzingis trade went, however, they are in a period of waiting for that ideal complementary piece to become available (and to have sufficient picks available to trade).

From Dončić’s perspective, this next move needs to be perfect. Shattering records and piling up regular season accolades is one thing, but it only carries so much weight when it comes to all-time discussions and evaluating a player’s legacy.

Can’t wait for tonight. So much respect for you @swish41! Thank you for everything. What a player but most importantly what a great person! #41Forever 💯❤️ pic.twitter.com/AHUcrHO3Ac

From an individual, 82-game angle, Dončić is at his peak. He is heading towards the Harden tier as a regular season performer, albeit with more significant postseason moments even at this stage of his career.

To take him a notch or two higher towards the game’s most iconic figures, the Ljubljana native needs a co-star and to develop as an off-ball threat in the halfcourt.

Winning a title is not make or break for a player’s career by any stretch, yet Dončić has proven he can steamroller through the regular season and deliver in the early rounds of the postseason.

His standing in the history of the game once he retires the stepback jumper and crosscourt passes will depend on the teams he plays on and how much he is willing to sacrifice individual honours and statistics for the benefit of the collective.

It doesn’t take overly adventurous imagination to envisage a future where Dončić is recognised as a top-10 player in NBA history, which is a remarkable place to be in for a 23-year-old.