Is The 2023 Australian Open Novak Djokovic’s Title To Lose?

Novak Djokovic has a superb record at the Australian Open but is the 2023 tournament his title to lose? 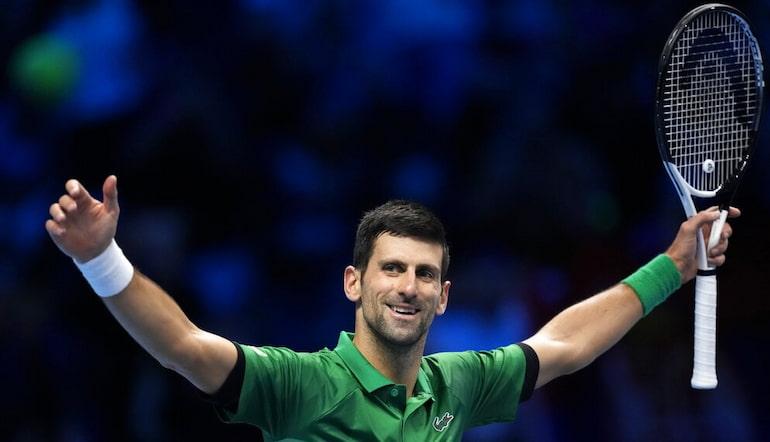 Novak Djokovic is the most successful man in Australian Open history, and he is once again the comfortable favourite tennis betting in 2023.

It has been a tempestuous couple of years for Djokovic’s legacy, a period where off-the-court issues have often cast a shadow over his on-court performance.

The Serbian wrapped up his sixth ATP Finals win at the end of 2022, defeating Casper Ruud in the final.

It concluded a year where he did not compete in either the Australian or US Opens, but won at Wimbledon. He also added further titles in Rome, Astana and Tel Aviv.

📆 The countdown is on: Who will be crowned King and Queen of Melbourne in 2023? 🏆🇦🇺#AusOpen | @discoveryplusUK pic.twitter.com/xpHI6xxYKv

Both are among the chasing pack heading into the 2023 edition of the tournament, with Medvedev aiming to bounce back from a disappointing end to the year.

Djokovic is owner of an 8-4 career record against Medvedev, including a win over the Russian in the 2021 Australian Open final.

He is 30-29 head-to-head with Nadal, but he’s 20-7 on hard courts and has twice beaten the Spaniard in Australian Open finals.

Only Nadal can better Djokovic’s tally of nine titles at an individual Grand Slam. Backing the Serbian in tennis betting tips has been a pretty safe option for the last decade, and especially so at the first major of the year.

James Anderson, who won three Australian Open titles in the 1920s, is the only men’s player who can better Djokovic’s 91.11% winning percentage at the event.

On hard courts overall, Djokovic has a record 655-121. That’s a winning rate of 84.41%, which again is second all-time behind four-time Grand Slam winner Jean Borotra, who won the final of his major titles in 1931.

Djokovic is the most successful male player on hard courts since the Second World War.

The 2022 season was disrupted, and far from his strongest, yet Djokovic rightly enters Melbourne as the man to beat.

This sort of track record is almost impossible to overlook, particularly after he cruised to glory at the ATP Finals, dropping a lone set in his five matches.

The decline has to come at some point, though, doesn’t it?

Djokovic celebrates his 36th birthday in May. He was defeated by Holger Rune in Paris prior to the ATP Finals, and fell to Felix Auger-Aliassime in the Laver Cup in September.

Even the seemingly ageless sports stars succumb to Father Time. Serena Williams and Roger Federer extended their peaks longer than most, yet both retired in 2021.

Djokovic does not appear to be close to that point, but some players see their performance levels tumble off a cliff edge.

As yet, we can only go on what we’ve seen. The last sighting of Djokovic was an intimidating prospect for the rest of the tour, dismantling the world’s best at the ATP Finals.

For a while, tennis has been waiting for a new star to succeed Djokovic and Nadal.

Carlos Alcaraz is the leading candidate at the moment, and the Spaniard is the second favourite in Australian Open betting behind Djokovic. Alcaraz overcame Djokovic in a classic at the Madrid Open last year.

At 19, he outplayed Ruud to win his first Grand Slam at the US Open. Ascending to superstardom in the closing months of the calendar year, Alcaraz is the youngest player of all-time to become world number one.

Injury forced the teenager out of the ATP Finals, but he is healthy heading into the new season and well aware of the new challenges which come with being an established name.

Alcaraz said, "I feel good finally. I had a month to recover well the ab and right now I feel almost 100 percent. I have been training normally this past week and I'm feeling great.

"Of course having a target on my back from everyone is going to be a little bit different for me this year and I have to be prepared for that. I'm going to try to finish 2023 at the same position as right now. It's going to be a long year but of course I'm going to enjoy."

Here's 10 times he blew our minds this year... pic.twitter.com/CDfBpv4brT

Part of Djokovic being such a clear favourite is down to the fitness of Alcaraz and Nadal. If both prove they are at the top of their game before and during the tournament, there is a much greater threat to Djokovic.

Medvedev has been able to beat Djokovic in the past, but he fell short of his usual standards in the last few months of 2022.

None of Djokovic’s three closest rivals enter 2023 at their strongest point. Of course, that is something which can quickly change, but it plays further into Djokovic’s hands after his ominous end to the calendar year.

Further afield, 21-year-old Jannik Skinner is destined for a breakthrough in 2023 after numerous impressive performances in 2022. Skinner, however, is yet to make it past the last eight of a Grand Slam.

Rune, including the win over Djokovic, was in fine form over the last few weeks. Like Skinner, he lacks Grand Slam experience, with a lone quarter-final appearance coming at the 2022 French Open.

At 19 years old, though, the Norwegian is not a player to be overlooked and has beaten the world’s best players repeatedly, which bodes well for a deep run down under.

The 2023 season is an exciting time for men’s tennis. Rune, Skinner and Alcaraz represent a fresh era, perhaps finally ready to topple the Djokovic and Nadal reign.

While the Australian Open could be a real test for Djokovic, one wonders if it is a little too early in their respective careers to take down the Serbian if he can reach the level he showed in the ATP Finals.

He might have sat out the 2022 tournament. He might only sit fifth in the world rankings. Djokovic, though, is still the man to beat heading into the Australian Open.

It will take something really special, a performance for the ages, for one of the next generation to beat the nine-time champion should be maintain his standards from the season finale.