Looking for the best ITV racing tips ahead of the biggest meetings? Find horse racing tips and ITV7 picks here at 888sport. 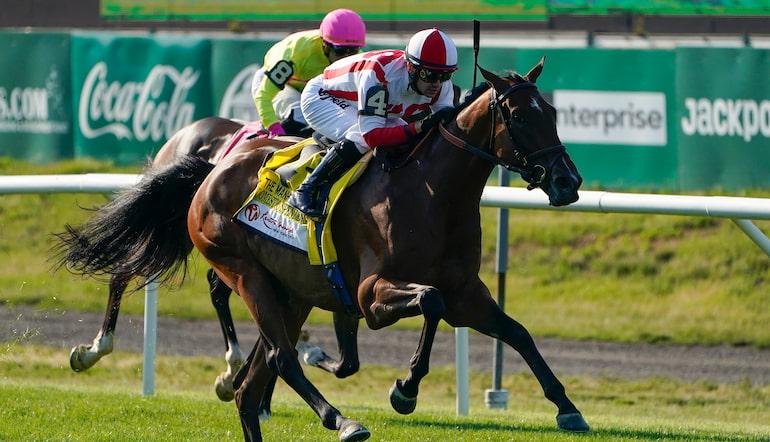 ITV Racing replaced Channel 4 Racing on 1 January 2017 as the main British terrestrial horse racing broadcaster and the channel has been covering a whole host of racecourses from that point onwards.

It was recently announced that ITV will continue as the exclusive free-to-air broadcaster of British horse racing until 2023.

Included in almost 100 days of terrestrial coverage are all the main channel (ITV1) marquee events such as the Cheltenham Festival, the Grand National Meeting from Aintree, the Derby Festival from Epsom Downs, Royal Ascot and British Champions Day from Ascot, Goodwood Festival, the Ebor Festival from York and the St Leger Festival from Doncaster.

ITV’s racing coverage has also picked up some industry prizes along the way since 2017.

The ITV Racing team won a BAFTA for its coverage of the 2017 Grand National while Director Paul McNamara earned a BAFTA nomination for his 2020 Cheltenham Festival coverage.

Ed Chamberlin and Francesca Cumani won the Broadcaster Sports Presenter of the Year award at the 2018 British Sports Journalism Awards.

How To Watch ITV Racing

You can watch horse racing on terrestrial TV, with the big-race action covered live on ITV and ITV4 pretty much every single Saturday of the year. In addition, the big racing festivals are aired mid-week so you never need miss out on the latest action.

ITV Racing can also be watched on the ITV Hub and it has its own dedicated webpages. If you looking to have a bet on horse racing then the ITV racing website should be one of your very first ports of call.

There a whole host of presenters from different backgrounds on the ITV team. Let’s take a look at the main ones.

Adele Mulrennan - Before moving into television, Adele was an apprentice jockey for Dandy Nicholls. In 2008, she was the winner of the Scottish Sprint Cup.

Adele did particularly well in 2021 with her Royal Ascot tips.

Alice Plunkett - Alice has presenting horse racing for the past 15 years covering an impressive and varied range of events.

Her first terrestrial role on Channel 4 began with The Lunchtime Show and she was brought into the main fold in 2001.

AP rode a record 4,358 winners and was Champion Jockey a record 20 consecutive times. He currently serves as a pundit on the show.

He joined Sky Sports as a freelance stats expert in August 2000 before moving in front of the camera as a presenter on Sky Sports News.

Francesca Cumani – Cesca grew up in the Newmarket stables of her Derby-winning father, Luca.

She got into broadcasting when Australia’s Channel 7 asked her to be on their Melbourne Cup panel. She later went on to become the station’s lead racing analyst and also hosted The Winning Post on CNN.

Luke Harvey – Luke is one of ITV's top presenters. In 2017 he won racing's Broadcaster for the Year Award at the 51st annual Horserace Writers and Photographers.

He is also a correspondent with ‘Sky Sports Racing. He spent eight years as a journalist on the Racing Post and four years with the Racing Channel prior to making it onto mainstream television.

Oli Bell – Oli started his media career in radio working for his father (Rupert) covering a variety of racing and sporting events and moved into television with Racing UK in 2006.

Oli fronts ITV’s ‘The Opening Show’ on ITV4 and quite often the “Social Stable” on the main channel.

Richard Holies – Richard is a horse racing commentator for ITV.

He got his first broadcast role commentating on racecourses in 1992 and has worked for a multitude of channels and organisations since.

In 2012 he achieved the unique feat of being the commentator for every Classic in the same year.

Mark Johnson – Mark is a horse racing commentator for ITV.

His first race commentary was in 1986 at Tweseldown Racecourse in Fleet, Hampshire and in 1995 he called his first Classic, the St. Leger at Doncaster.

ITV4 broadcasts The Opening Show, the morning magazine style programme which is very similar to The Morning Line show that Channel 4 used to put on air.

Oli Bell is the host and the show is generally broadcast at 9.30 am on a Saturday morning but sometimes this time varies.

During a big Festival The Opening Show is sometimes broadcast mid-week too.

ITV7 How To Play

To play ITV Racing’s online competition - the ITV7, you simply need to select 7 horses which you will win the 7 selected races on any given day the competition is running – generally Saturday.

If you correctly predict all 7 winners, you share the prize pot equally with any other lucky contestants.

In order to take part in the ITV7 competitions you either need a Sportinglife account or you can simply register an account directly via the ITV7 website.

You may have noticed over the last few months that our 888sport horse racing tipping blog effectively mirrors most of the races that you will find in the ITV7.

It’s definitely a good place to start if you are looking for some ITV7 pointers. Our NAP of the day is quite often what we consider to be the day’s ITV7 banker.