Everyone knows Isner vs Mahut is the longest tennis match of all time but which other games rank amongst the longest matches in tennis history? 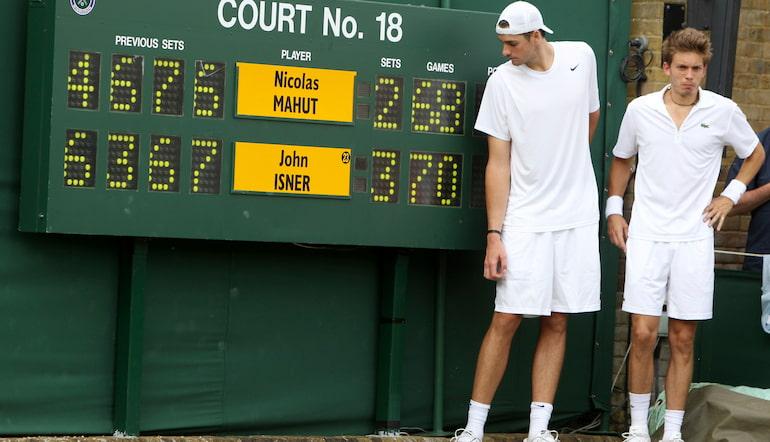 Waiting for tennis betting results can take a while. Unlike the set time of Premier League football or even a T20, tennis matches are not defined by the clock.

Rules have been tweaked in recent years to avoid these epic clashes, which might mean there’s minimal change to the list of longest tennis matches in the coming years.

There have been some lengthy clashes with the Wimbledon trophy on the line.

Roger Federer and Novak Djokovic played one of the greatest matches ever back in 2019, but that doesn’t quite make this list. It is a match at the All England Club which sits top of the pile, however.

There’s a relatively set formula for these exhausting epics. It’s usually a duel of big servers, a contest defined by held serve after held serve with neither player able to create an opening.

Break points are infrequent, and the longer the match goes, the harder it is to muster the energy to battle against the fireball serves coming your way.

Some of the sport’s most famous names feature below. Others are less well known, but have booked their place in the annals of tennis history with these seemingly never-ending encounters.

Here are the 10 longest tennis matches ever...

Tennis fans are familiar with John McEnroe. He’s one of the most successful players of all-time, and a character who remains influential in the sport. Jose Luis Clerc, representing Argentina in the 1980 Davis Cup, is less recognisable.

Aside from reaching the fourth round at a couple of Grand Slams, this was Clerc’s greatest achievement.

The pair rattled through three sets before stopping for bad light in Buenos Aries. Returning the next day, they played a 26-game fourth set as Clerc clinched an improbable win.

Where Clerc and McEnroe engaged in singles battle, number nine on this list is a doubles contest between Argentina and Russia.

Lucas Arnold Ker and David Nalbandian got the better of Yevgeny Kafelnikov and Marat Safin in a five-set classic.

This wasn’t enough for Argentina to overcome the Russians, however, who won the Davis Cup tie 3-2 and beat France in the final.

Boris Becker and John McEnroe had their fair share of showdowns.

With a whopping 126 career titles between them, Becker and McEnroe are among the sport’s most iconic figures, and their 1987 Davis Cup clash was their most memorable meeting.

Having won one match apiece after two clashes, Becker got the better of McEnroe in a five-set match, including a 15-13 second set and 8-10 third set. This saw the USA get relegated in the 1987 Davis Cup.

After two losses, John McEnroe’s third entry on this list ended in happier fashion. The 1982 Davis Cup quarter-final saw the USA meet Sweden, but few were prepared for what followed between Mats Wilander and McEnroe.

Wilander was just making his name at this stage. McEnroe was more established, with four Grand Slam singles titles to his name.

Going two sets down, though, Wilander made his mark, including a 15-17 third set win. McEnroe was taken deep in the fifth before he eventually won 8-6.

This was the longest match in tennis history for two decades. Vicki Nelson and Jean Hepner were little-known players when they matched up.

Nelson was number 93 in the world, Hepner number 172. The latter retired not long after their record-breaking encounter.

Where other matches on this list featured plenty of quick games, this was just a two-set affair. Nelson and Hepner, each desperate for victory, were freakishly stubborn in their defence, and even played a 643-stroke rally, the longest in tennis history.

This match was like no other. It will, perhaps, never be replicated. Per a New York Times piece in 2009, the pair are ‘vaguely embarrassed’ by their place in the record books.

Breaking the long-standing record, Fabrice Santoro and Arnaud Clement went to 16-14 in the fifth set of the 2004 French Open. Santoro saved two match points in a match which was played over two days.

Two Frenchmen meeting at Roland Garros is always a special occasion. The crowd loves these matches, and they got a bit longer to enjoy it this time round.

These two have been contenders for the fastest tennis serve. John Isner sits third on the all-time list, and his powerful serve played a big part in this match against the Kevin Anderson.

The towering South African was the eventual victor, winning the final set 26-24.

The win put Anderson in just his second career Grand Slam final, but he was unable to put up much of a fight after such a long semi-final and lost in straight sets to Novak Djokovic.

Few rivalries match up to Brazil versus Argentina. That was the clash in the first round of the 2015 Davis Cup. Leonardo Mayer and Joao Souza did not disappoint.

Mayer was the heavy favourite, having reached his career high ranking of 21 in 2015. Souza might have been a massive underdog, but he made life very difficult.

Mayer took the first two sets through tiebreaks before Souza won the next two. The 15-13 final set ended in favour of the Argentine, but it wasn’t without a gargantuan effort in the third-longest match ever.

Lukas Rosol and Tomas Berdych took on Stanislas Wawrinka and Marco Chiudinelli in the first round of the 2013 Davis Cup. With only one tie break in the first four sets, this was a standard, tight Davis Cup doubles match.

The fifth set is when things got ridiculous. A mixture of fatigue and talent dragged the match out to historic levels.

Rosol and Berdych were the eventual winners of a 24-22 final set, but only after spending a total of seven hours and two minutes on the court.

If you got stuck in this on one of the best Xbox tennis games, questions would be asked about its realism.

John Isner versus Nicolas Mahut at Wimbledon in 2010 is the stuff of legend. It’s over four hours longer than any other match and was ultimately spread across three days of tennis.

This match has its own Wikipedia page, such is its significance. The final set alone (which finished 70-68 in Isner’s favour) was lengthier than the previous longest match.

This is a match tennis fans will never forget, and with how rules have changed since, a record which might never be broken.

All of the tennis markets and odds can be found at https://www.888sport.com/