Who will lift the Vince Lombardi Trophy at the 2023 Super Bowl? Join us as we look at the top five fancied teams according to NFL betting odds 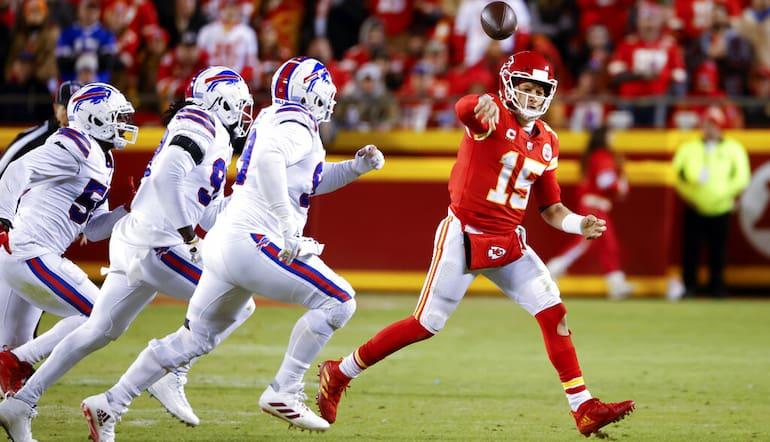 The 2022 NFL season is poised to be a thriller. Tom Brady returns after a (very) temporary retirement.

The Rams are looking to defend their crown, and several big names have switched franchises during the summer.

A case can be made for a raft of teams as Super Bowl candidates in preseason NFL betting tips.

We are focusing on just five of the contenders with the best NFL odds to lift the Vince Lombardi Trophy in 2023.

The defence was the best in the NFL in yards per play (and by a considerable margin, at that).

Josh Allen is a serious MVP candidate, and only two teams scored more points than the Bills in the 2021 regular season.

After losing to the Chiefs in overtime in the playoffs, the Bills are primed to cruise to another division title and stage another deep run even in the stacked AFC.

Roll on September for 2022.#NFL pic.twitter.com/N8hiCl9CG9

Patrick Mahomes has the 14th highest NFL salary for 2022 despite owning the second-largest cap hit.

The Chiefs have managed to build a contender around Mahomes, and should be an unstoppable offence even after trading Tyreek Hill in the offseason.

Aggressive in the draft to meet needs on defence and in the pass catching department, the Chiefs also added Juju Smith-Schuster in free agency. Tyrann Mathieu departing is a risk, but one Kansas City is clearly comfortable taking.

If healthy, this team is capable of winning the Super Bowl. As long as Mahomes is there, Kansas City is going to be in the mix, but the question is whether the defence and offensive line can hold up.

How could we overlook the defending champions?

Losing Von Miller hurts, but the Rams still have one of the premier rosters in the sport and they have just shown us they can deliver come playoff time.

It takes a lot of luck to go back-to-back in the NFL – the Rams certainly have the talent to return to the Big Game.

Then, they acquired Russell Wilson this offseason and handed the former Seahawk an historic contract.

Their price to win it all is longer than some might expect, which can be attributed to the bloodbath which is the AFC West.

In Wilson, though, Denver has a quarterback capable of going-to-toe with anyone, and he will enjoy much better protection than he did in Seattle.

Cincinnati defied preseason NFL predictions to reach the Super Bowl earlier this year. A hangover often hits the Super Bowl losers, but the Bengals should not be written off.

Joe Burrow is only going to get better. The offensive line has been revamped, and they went heavy on defence in the draft. Cincy is worth a wager at 20s.

NFL Tips
About the Author
By
Sam Cox