How much is Tony Bellew worth? We look at the boxing legend's career profile, with Tony Bellew net worth figures and those fights with David Haye... 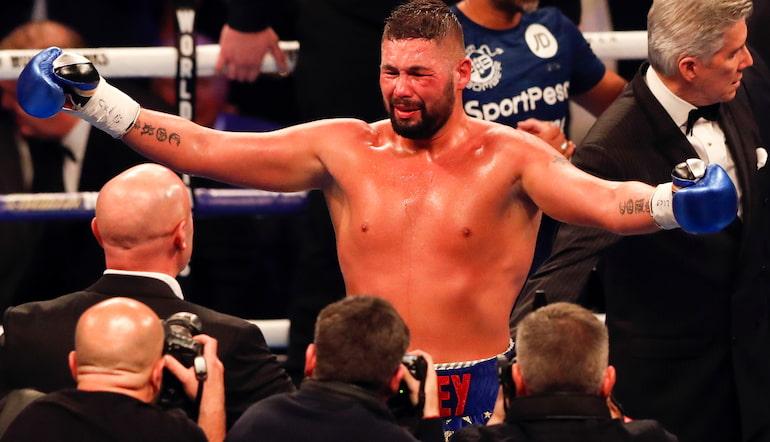 Now a household name in British boxing, Tony Bellew was one of the toughest fighters of his generation.

Anyone who enjoys betting on boxing knows all about Bellew’s heart and desire to succeed and the Liverpudlian climbed the boxing rankings – peaking with his WBC cruiserweight title.

How Much Is Tony Bellew Worth?

As well as boxing, Bellew is a passionate Everton supporter and he fulfilled a lifelong dream when he fought for the world title in front of a sold out Goodison Park.

Here, we discuss Tony Bellew net worth figures, as well as a broader look at his life in and out of the boxing ring.

According to figures obtained by The Net Worth Portal, Tony Bellew is worth an estimated £9.6 million.

Reports suggest that Bellew made a tasty £2.8 million from his first fight with former world heavyweight champion David Haye – not bad for a night’s work…

With a number of lucrative endorsements during his career and sponsorship contracts, Bellew has managed to maintain a high level of income since his retirement.

While Bellew’s wealth figures cannot compare to Eddie Hearn net worth numbers, the Bomber has made a healthy living for himself in the ring and boxing commentary box.

Tony Bellew has been married to Rachael Roberts since the summer of 2018, though the couple have known each other since they were nine years old.

Bellew and Roberts have four children together – all boys. What are the odds one of them grows up and follows in their father’s footsteps in the boxing ring?

Rachael is capable of holding her own against the five boys though and Bellew has admitted in the past that his wife rules the roost at home.

Two popular names in boxing betting tips throughout their careers, the Bellew vs Haye feud was one of the biggest in boxing.

While Haye suffered an ankle injury during the first bout, there were no such excuses in the rematch as Bellew clinched a fifth-round stoppage with a devastating performance.

Haye was gracious in defeat and Bellew was full of respect for his great rival – and both men can be seen working together on Sky Sports Boxing from time to time.

If there’s one thing Bellew loves more than boxing and his family, it’s Everton Football Club. A lifelong Toffee, Bellew is one of the most famous Everton supporters.

Bellew has gone on record as stating the highlight of his career was fighting at Goodison Park – made even sweeter as he clinched the WBC cruiserweight title.

Often pictured at the Everton stadium, Bellew is a regular guest at the club and his impact and influence on the city of Liverpool has been heart-warming.

Yes, that’s right – Tony Bellew is a film star! Okay, star may be a tad far fetched but Bellew made the step up to the big screen while appearing in the Rocky film Creed in 2015.

Playing the role of ‘Pretty’ Ricky Conlan, Bellew is a cocky British boxer who has recently become the world light heavyweight champion.

Bellew is the perfect fit for the role of Conlan but he is not the only boxing legend in the movie, with Andre Ward also earning a cameo role as Danny ‘Stuntman’ Wheeler.

Standing at 6 foot 3, Bellew was tall for a cruiserweight boxer – with the average height for that division coming in at around 6 foot 1.

Bellew stood out even more as a light heavyweight fighter, with the decision to go up in the boxing weight classes to cruiserweight making complete sense.

A fighter at 6 foot 3 will often struggle to maintain his weight at the cruiserweight limit so Bellew deserves great praise for his discipline on that front.

It is hard to give an exact weight for any boxer but it is even tougher for a fighter like Tony Bellew.

With the Liverpudlian jumping between boxing weight classes, Bellew had to find more than one ideal fighting weight in order to optimise his skills in the ring.

Bellew came in at 213 lbs for his first fight against David Haye – a career high weight.

For his final fight against Oleksandr Usyk, Bellew hit his cruiserweight target weight for the first time in two years. The Bomber weighed in at just over 199 lbs for that bout.

Like many sportsmen, Bellew isn’t afraid to hold back with his views on all aspects of life. He can be found tweeting about boxing, politics and even golf!

While his opinions have landed him in hot water with followers in the past, it is refreshing to see Bellew stick to his guns and continue with his approach to social media.

You can follow Tony Bellew Twitter page here for the latest boxing updates, gossip and the odd reference to the political world.

Boxing Betting
Boxing Tips
About the Author
By
Alex McMahon