Who is the best commentator in UFC history? We look at the greatest UFC commentators of all-time... 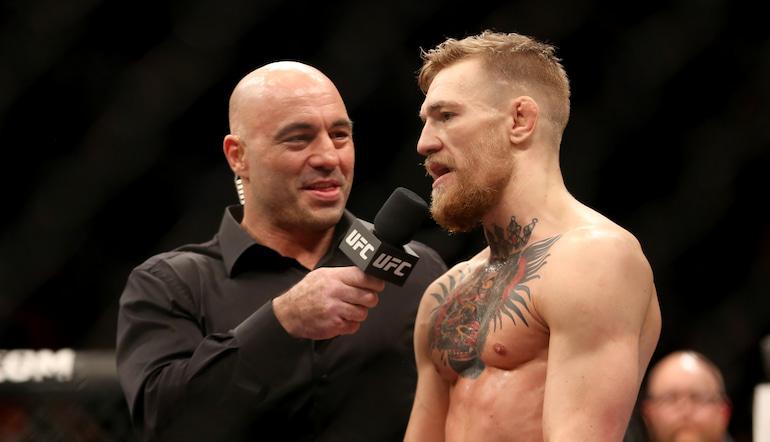 Sports commentary is no easy feat. Hitting the right tone is vital, whether building up suspense ahead of a penalty kick or hyping up a boxing main event.

The best UFC commentators can offer unique insight into the sport, with detailed analysis of fighters that can swing punters who enjoy betting on UFC.

The likes of Joe Rogan and Mike Goldberg played pivotal roles in promoting UFC, and they are undoubtedly two of the greatest UFC commentators to take to the mic.

Some of the commentators here are play-by-play analysts while others provide expertise as color commentators on major UFC bouts.

UFC betting tips followers will know most, if not all, of the names on this list. Here are some of the best UFC commentators in the history of the sport…

There’s only one place to start and that’s with Joe Rogan. The leading color commentator for UFC pay-per-view events for so many years, Rogan is a famous name in the UFC world.

An expert martial artist in his own right, Rogan holds a black belt in both Taekwondo and Jiu-Jitsu. That level of experience puts him in a unique group of UFC commentators.

Rogan’s knowledge of the sport and unrivalled ability to predict specific moves is what gives him the edge over his UFC commentator peers on this list.

A popular UFC commentator around the world, Rogan is the first commentator name that springs to mind when you think of MMA. Without a doubt, he is a UFC legend.

The man given the tough task of replacing Mike Goldberg, Jon Anik has been a key figure in UFC for years – working as a commentator on FX and FUEL TV shows before his promotion.

Known predominantly for his distinct voice and entertainment value in the commentary box, Anik is a now a household name with UFC betting fans.

While he can’t compete with Rogan and Goldberg in terms of impact and influence on the sport, Anik ranks up there in terms of style and substance in the UFC commentators world.

Mike Goldberg was around long before UFC ring girls started to take centre stage – he was one of the original MMA commentators back at UFC Ultimate Japan in 1997.

Although you could pick holes in his general MMA knowledge, Goldberg made up for that in his charisma and incredible ability to enhance the entertainment.

Goldberg was replaced in the UFC overhaul in 2016 though the wider fan base was shocked at the decision. Goldberg has a guaranteed spot in any UFC commentators Hall of Fame.

A former UFC middleweight champion, Michael Bisping is a popular figure amongst British supporters. Since hanging up his gloves, he has made major strides in the UFC commentator ranks.

Many fighters decide to pursue a commentary career but Bisping has been one of the most successful – he has been a huge hit since making the transition.

Bisping is known for his humour and passion, with the excitement in his voice clear for all to hear at UFC events. It is great to hear a former fighter’s view in the UFC commentator booth.

While there are no female UFC commentators as of yet, there are a couple of high profile UFC reporters. In time, these women could break into the UFC commentary booth - so let's take a closer look at these stars...

One of the most successful female UFC reporters, Laura Sanko has dreams of becoming the first female colour commentator in UFC history.

Most importantly, she has the backing of UFC megastar Dana White and she has certainly been a huge hit as an interviewer, holding her own against some of the top personalities in the sport.

Like Sanko, Megan Olivi has the potential to blossom into a female UFC commentator. She is a journalist for ESPN but has sat on commentary panels at various UFC events.

A recognisable figure in the UFC world, Olibi has interviewed some of the most prominent names in UFC and she is well known with MMA sports betting fans.