Wimbledon Logo - What Is The Wimbledon Tennis Championships Emblem?

The Wimbledon logo is recognised by tennis fans around the world. Here is our guide to the famous Wimbledon tennis logo... 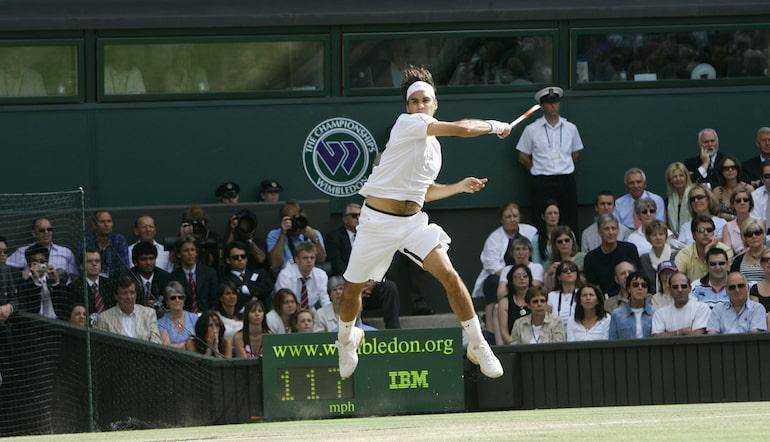 The Wimbledon logo is one of the most well-known in all of sport. Whether a tennis odds fanatic or a Grand Slam watcher, the Wimbledon logo carries a unique prestige, which is rare across the sporting world.

Wimbledon betting is popular worldwide. The two weeks in an affluent corner of London are a staple of the sporting cycle.

Some traditions at the All England Club are well-known. The uniform rules for players have been discussed at length over the years, and controversial moments have raised questions about dress codes in the Royal Box.

There’s more than you might expect to consider at Wimbledon, though, whether it’s etiquette or the do’s and don’t’s of a day out at the tennis. From the logo’s history to its everyday use, we’ve got you covered...

First played in 1877, Wimbledon was just a small tournament. Even in the early days, though, the Wimbledon logo has been a symbol used everywhere.

The deep green and purple are synonymous with the Championships, and the crossing of the two racquets represents the duel between two players on either side of the net.

Little changes at Wimbledon. The same goes for the logo. Where football clubs tweak their logo every few years, Wimbledon’s logo is an integral part of the All England Club’s branding, and they have little reason to make a meaningful change.

It’s a circular logo with an outer purple ring, attracting the eyes to a deep green base in the centre. The green is meant to represent the lawn of the Championships, which is the only Grand Slam played on grass.

Two crossed racquets are the centrepiece of the logo, while ‘The Championships’ and ‘Wimbledon’ are in white text in the outer purple ring.

Across the internet, suggestions for a Wimbledon logo facelift can be found. It’s hard to see any significant alterations happening any time soon, however.

How To Draw The Wimbledon Logo

Drawing the Wimbledon logo is easier than it might seem. There are various online tutorials to recreate your own logo, one of which can be found here.

Here’s a step-by-step guide to draw your own Wimbledon logo.

The Wimbledon logo is everywhere at the All England Club. A key piece of the branding, the logo without any text is instantly recognisable as Wimbledon, just like Nike’s Swoosh or Adidas’ three stripes.

From official documents to the Wimbledon website, tickets and all over the venue itself, it’s hard to avoid the Wimbledon logo in the world of tennis.

More so than its peers in Melbourne, New York and Paris, the Wimbledon logo has an iconic status. Many will cap off a day out at Wimbledon with some merchandise featuring the green and purple.

So much has changed at Wimbledon. Tennis betting tips have been impacted by new courts and roofs. The fan experience is different, and champions have come and gone, but the Wimbledon logo is an ever-present in south west London.

Taking to the Wimbledon courts has strict requirements.

For a venue steeped in history and tradition, it’s perhaps not surprising that Wimbledon has rules for attire on and off the court, but it still makes it different from other Grand Slam venues.

The predominant rule for players at Wimbledon is that their clothing must be all-white.

Some colour accents are deemed acceptable, though there are strict guidelines for how much colour, and what designs are okay to be worn.

For instance, anything looking to promote a brand other than the kit manufacturer would not be allowed.

Wimbledon’s all-white clothing rules extend to an extraordinary level. Undergarments are included in this, according to the official Wimbledon website, as are trainers, supports and the underside of a cap.

It’s also noted that ‘white does not include off-white or cream’.

The umpires and ball boys and girls wore a dark green colour up until 2006. This was the same green found on the Wimbledon logo.

However, there was an outlandish change (by Wimbledon’s standards, at least) in 2006, when the Championships opted to use blue and cream-coloured uniforms for these roles, provided by Ralph Lauren.

This was the first time in Wimbledon’s illustrious history that an external designer had provided Wimbledon clothing.

There’s no official dress code for Wimbledon fans, though smart attire is encouraged throughout.

When it comes to the Royal Box, though, there are strict rules. It’s no hats for women, and men must wear a shirt and tie. Otherwise, there’s a risk of being refused entry as Lewis Hamilton controversially was a few years ago.

Smartening up is particularly important for Court One and Centre. Any clothing which could be considered as marketing is forbidden, and political slogans are not allowed.

While there’s no firm dress code for tennis predictions followers at Wimbledon (unless you’ve landed a pass to the Royal Box), it’s well worth considering what’s expected before heading out for the day.

Tennis Tips
Wimbledon Tips
About the Author
By
Sam Cox