World Cup 2022 Team Guide: Everything You Need To Know About Australia

Here, we look at the Australia national team ahead of the 2022 World Cup. Scroll down for everything you need to know on the Socceroos 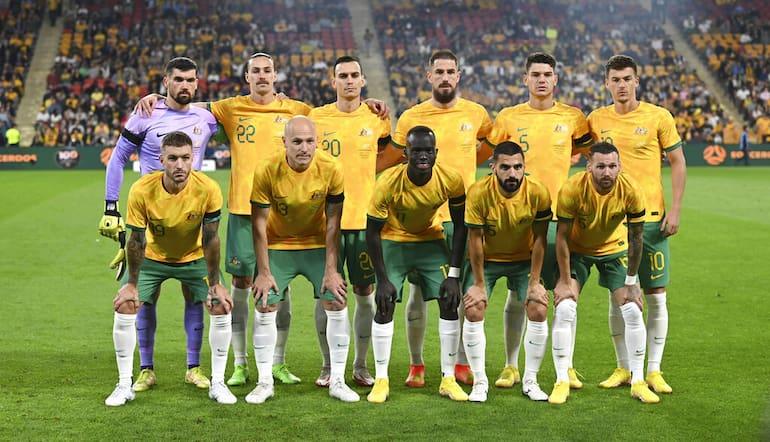 How will Australia fare at the 2022 World Cup? Join @SteTudor123 as he looks at the Socceroos in his everything you need to know guide ahead of this winter's competition...

Australia History at the World Cup

For the first half a century of their existence the Australian national side almost exclusively toured in exhibition matches, failing to appear in any major tournaments of note.

Initially, this was chiefly due to logistics, with international air travel financially prohibitive pre-war. Let’s face it, the Antipodes is an awfully long way away.

Then came play-off defeats, lots of play-off defeats. On six different occasions throughout their history, Australia have stumbled at the final hurdle when attempting to qualify for World Cup finals.

They did manage to qualify in 1974, a much-celebrated achievement in the country even if it did only lead to a solitary point gained and a swift exit.

It took another 32 years for the Socceroos to next participate, ironically for the second time in Germany, and impressively they have been a permanent fixture ever since, blessed as they have been in the 2000s with some terrific players, such as Tim Cahill who was always capable of turning the live betting market on its head with a spectacular strike.

Elsewhere, and crucially, Australia now regularly exports its best talent to the major leagues across the world, gaining experience and making the national side better as a consequence.

This time out, the Socceroos reached Qatar by becoming the first team to progress through a World Cup Play-Off via pens. Given their unlucky past, nobody could possibly begrudge them of that.

Writing for the Sydney Daily Mirror in 1967, sports journalist Tony Horstead asked readers to suggest a nickname for the national side. By an overwhelming majority they went with ‘Emus’.

Regrettably, and perhaps aptly however, ‘Emus’ never got off the ground.

When a World Cup-inspired logo appeared seven years later, featuring a kangaroo wearing football boots, the ‘Socceroos’ was born. The rest is history.

There’s no getting around the fact that Australia are in an extremely tough group, but drawn out of Pot 4 that was always going to be the case.

World Cup winners four years ago, France are the obvious stand-out, with their squad packed full of household names, while last year’s Euro semi-finalists Denmark are a classy outfit.

Tunisia meanwhile went deep at AFCON last January and have more than enough ability to surprise.

Nike have described the colours of their home shirt as ‘University Gold, Tour Yellow and Green Noise’ and insists it ‘conjures the rugged, sandy landscape of the Outback and the rich wetlands and forests’.

The new Australia kits are here and wow, they’re cleannnn.

Fair enough. All we know is it’s a beauty that was narrowly edged out of making our top ten of best kits from the tournament.

The away top is pared back save for green glow accents.

Who Is The Australia Manager?

This is Graham Arnold’s second spell in charge of the Socceroos having also twice coached the Under 23s and twice been an assistant.

In between, he has guided two different teams to A-League success, being awarded the A-League Coach of the Year on three occasions.

As Australian as Home And Away and animals that kill you, when asked what his managerial philosophy was he simply replied with ‘fighting spirit’.

At 32, Aaron Mooy has bags of experience to go with his calm, clever link-up play in midfield and such qualities will be vital against three sides that are – on paper at least – Australia’s betters.

Now at Celtic, Mooy once turned down the chance of representing Holland after emerging as a genuine talent.

Brighton have their second goal at last and it's a wonderful bit of skill from Mooy to provide it.

The Socceroos are a lengthy 49/4 in the World Cup betting to beat France in their opening fixture and that’s hardly a surprise given the reigning champions widespread quality.

But we have seen before big teams caught cold in their first game and what we know for sure is that the underdogs will turn up, graft for each other, and show plenty of fighting spirit.