World Cup 2022 Team Guide: Everything You Need To Know About France

Here, we look at the France national team ahead of the 2022 World Cup. Scroll down for everything you need to know on Les Bleus 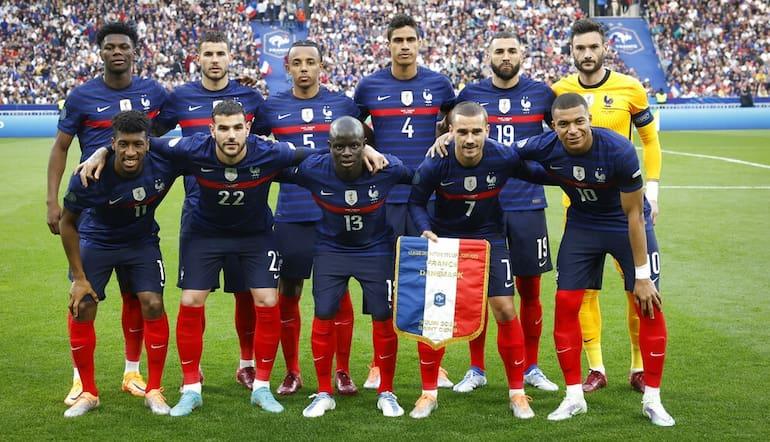 How will France fare at the 2022 World Cup? Join @SteTudor123 as he looks at Les Bleus in his everything you need to know guide ahead of this winter's competition...

France History at the World Cup

From playing their first international fixture in 1904 to the present day, France have been a major player on the global stage, and this is epitomised by a proud and long heritage at the World Cup.

One of just four European teams to participate in the inaugural tournament, Les Bleus evolved as a footballing nation, eventually developing a ‘golden generation’ in the Fifties, complete with Raymond Kopa and the scarily-prolific Just Fontaine, who reached the semi-finals in 1958.

There followed a period of strife, with just the one qualification across the subsequent two decades but in the Eighties, France returned with bags of panache and inspired by a midfield four that became known as the ‘carre magique’ (magic square).

With three-time Ballon d’Or winner Michel Platini bossing proceedings, a magnifique and memorable side entertained their way to a further two semis, all the while captivating a watching world.

France qualify for the 2022 World Cup.

Time to defend their crown 👑 pic.twitter.com/1oruhP2sW3

In the Nineties, France went one better, winning the competition on home soil by beating Brazil 3-0 in a final that saw the incomparable Zinedine Zidane take centre stage, scoring with a header.

Eight years later, Zizou was again in a World Cup final, and again used his head, but this time for all the wrong reasons.

At the most recent World Cup in Russia 2018, Les Bleus lifted the famous trophy anew, meaning they are one of only six nations to claim the tournament twice or more, but with France it’s as much about the players as their achievements.

From Fontaine, to Platini, to Zidane, what incredible talent they have bestowed on us, and that generosity continues to the present-day with Kylian Mbappe, who is set to run amok in Qatar.

With his blistering pace and trickery, Mbappe is the scourge of the live betting markets, capable as he is of changing the course of a game in a heartbeat.

Some international nicknames require an explanation. ‘The Blues’ possibly does not.

What may be of interest, however, is why the colour is so historically associated with France, to the point of the shading being commonly known as ‘French Blue’.

It’s because from the 12th century on, the heraldry of their royalty family has had the hue prominent in the background, representing the sky and a bright tomorrow.

Even though Group D has a strong favourite in France it’s still arguably the most intriguing of all the quartets, featuring a very decent Denmark side and two others who are more than capable of springing a surprise.

Tunisia are a difficult outfit to break down while Australia ran France close and held Denmark in an almost identical grouping during Russia 2018.

The home shirt may not be one of the stand-out kits at Qatar but the gold trim on navy blue is always a fetching combination. It’s conventional but classy.

For their away number, Nike have been inspired by the country’s traditional Toile de Jouy fabric. Think Versailles. Think decadence. It’s rather lovely.

Who Is The France Manager?

Didier Deschamp remains a divisive figure, with critics insisting the former Juventus ‘water-carrier’ tethers the extravagant talent he has at his disposal.

This is despite the 54-year-old guiding his team to World Cup and Nations League success in recent years. There’s just no pleasing some people.

The French squad may not be as packed with world class talent as it used to be, but it remains a stellar cast, and head and shoulders above his team-mates is the generational Kylian Mbappe.

Twenty-eight goals in 59 appearances for his country is a ratio the great Fontaine would have been satisfied with and at 23 years of age the PSG megastar is only going to be get better.

Victory over Denmark in their second game however is key because a failure to top their group may well result in a last 16 clash with Argentina.