World Cup 2022 Team Guide: Everything You Need To Know About Denmark

Here, we look at the Denmark national team ahead of the 2022 World Cup. Scroll down for everything you need to know on the Red and Whites 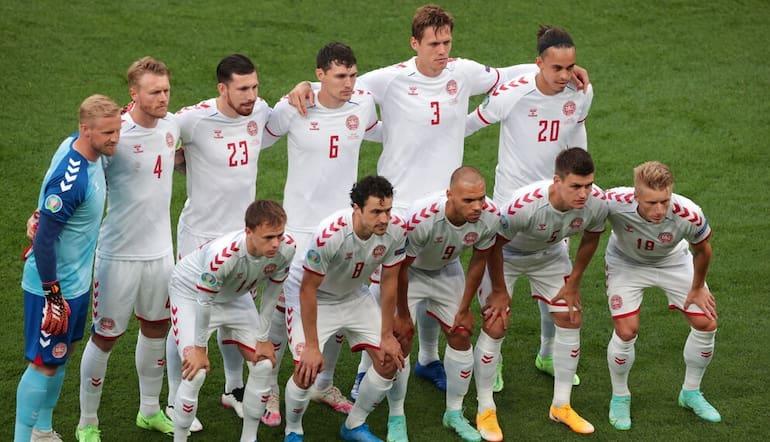 How will Denmark fare at the 2022 World Cup? Join @AlMacca93 as he looks at the Red and Whites in his everything you need to know guide ahead of this winter's competition...

Denmark History at the World Cup

Denmark will compete at the FIFA World Cup for only the sixth time in their history, having finished top of their 2022 World Cup qualifying group.

The Danes lost just once in qualifying, a 2-0 defeat to Scotland, and plenty of football betting punters will fancy Kasper Hjulmand’s side as lively outsiders for the Jules Rimet trophy.

They're the third nation to qualify following Qatar and Germany. pic.twitter.com/P3JCCQqhbD

Denmark’s best performance at a World Cup came in 1998, with the Danes reaching the quarter-finals of the competition before a 3-2 defeat to eventual runners up Brazil.

Having reached the semi-finals of the 2020 European Championships, Denmark are certainly capable of reaching the latter stages if everything goes to plan.

Denmark have been an established international team since the late 1890s and they have gone by a few leading nicknames throughout their illustrious history.

The Red and Whites is an obvious one on a play on the Denmark kit colour, while Danish Dynamite was a term coined in the 1980s during a particularly strong spell for the national side.

Denmark are no certainties to thrive in the Qatar conditions this winter but fans back in Copenhagen will be praying that the Danish Dynamite strikes once again.

Denmark have been draw in Group D at the 2022 World Cup in Qatar, alongside defending champions France, Australia and Tunisia.

While France are obvious contenders to go on and lift the Jules Rimet trophy, Denmark will be quietly confident of advancing to the knockout stages.

The Danes have played some fantastic football over the past 18 months and plenty of punters will be tempted to back them to qualify for the last-16 in sports betting odds.

Denmark will wear ‘toned down’ jerseys at the 2022 World Cup in protests at host nation Qatar and its human rights record.

The Danish national team will wear a monochromatic kit that pays tribute to the migrant workers who died during pre-tournament construction in Qatar https://t.co/qPRCbM1cj0

Kit provider Hummels were particularly outspoken on the issue, releasing an all-black third shirt for the tournament.

While the Denmark jerseys won’t rank on any best World Cup kits lists, you have to admire their strength and leadership on this particular matter.

Who Is The Denmark Manager?

Kasper Hjulmand is the Denmark manager, having been appointed in June 2020. The vast majority of his managerial experience has come at club level, leading several clubs across the top divisions in Danish football.

Hjulmand was in charge for Denmark’s superb run to the semi-finals at Euro 2020 and he has been a huge hit with fans during his short time at the helm.

This has to be Christian Eriksen. Denmark have plenty of talent in the squad but Eriksen is the one player with the ability to unlock any defence in world football.

The Manchester United midfielder has enjoyed a successful start to life at Old Trafford and he is an outside contender to challenge for Player of the Tournament at Qatar 2022.

We all remember Eriksen and that incident at the 2020 European Championships and hopefully he’ll be able to lead his country to the latter stages of the competition.

What a signing he's been! 👏 pic.twitter.com/XgWkPbkMeL

Currently priced at 30/1 in World Cup betting markets, Denmark are an attractive proposition for anyone who fancies a shock result in Qatar.

The Danes are consistent and while they may lack the glamour of a Brazil, they look ready made for tournament football – especially under Kasper Hjulmand.

The 4/1 available for Denmark to emulate their performance at the 2020 European Championships by reaching the semi-finals is another viable betting option.