World Cup 2022 Team Guide: Everything You Need To Know About England

Here, we look at the England national team ahead of the 2022 World Cup. Scroll down for everything you need to know on the Three Lions 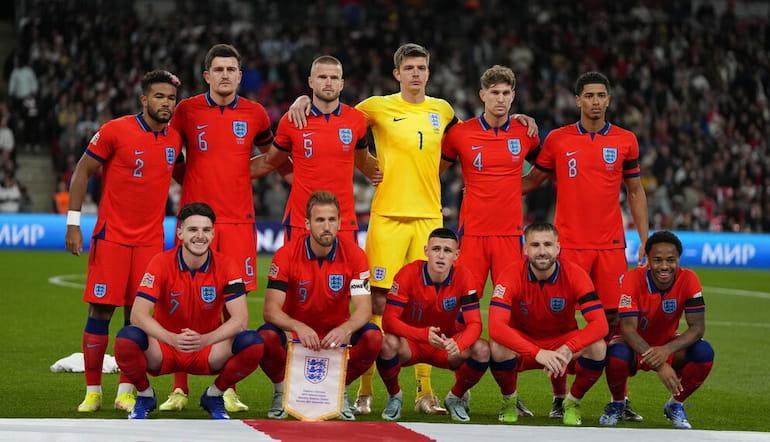 How will England fare at the 2022 World Cup? Join @SteTudor123 as he looks at Gareth Southgate's side in his everything you need to know guide ahead of this winter's competition...

England History at the World Cup

Though the former far outweighs the latter, England’s World Cup triumph in 1966 can be viewed nearly sixty years later as both a blessing and a curse.

On a sunny July afternoon, a team led by Bobby Moore beat West Germany 4-2 across 120 minutes of thrilling football that has rightfully been venerated ever since.

Unquestionably, it was, and remains, a zenith for English football, containing moments that have become iconic, from Nobby Stiles’ victory jig to, of course, that infamous shot from Geoff Hurst that maybe, probably, might have crossed the line.

David Beckham believes the timing of the World Cup may benefit England and has backed them to succeed at Qatar 2022 🦁🏴󠁧󠁢󠁥󠁮󠁧󠁿 pic.twitter.com/FTFj2fi8vu

Yet, while this heightened success resulted in the Three Lions insisting their way was the best way, other nations evolved, focusing on improving their technical ability and revamping stale tactical thinking. They moved forward while England, thinking they had cracked it, stood still.

Subsequently, a long period of struggle ensued, with a failure to qualify for a World Cup throughout the Seventies, and it wasn’t until Italia 90 – Gazza and all – that England properly re-established themselves on the international footballing map. That semi-final loss on penalties sadly still smarts.

Ever since, it has largely been a tale of near-misses and further spot-kick heartbreaks, but with Gareth Southgate furnished with a hugely talented squad the suspicion is they could go far in Qatar this winter.

Who knows, they might even win it, finally laying to rest 56 years of hurt.

England have had three lions adorn their badge since their first international fixture in 1872, the powerful symbol evoking imagery used on the Royal Arms that goes back to the reign of Richard the Lionheart.

In Norman times, a standard with three gold lions was carried into battle to inspire the troops.

As one of the tournament’s top seeds, Gareth Southgate’s side were never going to find themselves in an especially tough group, though they were unfortunate to be paired with their neighbours Wales, by some distance the highest ranked team in Pot 4.

Still, with USA and Iran making up the quartet, England should fancy their chances of emerging from Group B relatively unscathed, a view that is backed up by their World Cup odds.

Nike’s offering was met by a mixed reception on its unveiling, with some liking the retro vibes of the design that has a distinct nod and a wink to England’s Euro ’96 campaign.

Others, however, have criticised the blue gradient that runs across the shoulders, tapering into sharp lines that are supposed to resemble the clawing of a lion.

If the home kit is divisive, the away is a solid effort, its light and dark blue trim looking striking on deep red.

Who Is The England Manager?

Damned at times for his conservative approach, Gareth Southgate first steadied an international set-up that was heading for turmoil, then guided the Three Lions to a World Cup semi-final and a Euro final in consecutive tournaments.

Concerns that he is too risk-adverse may well be justified but after six years at the helm, his win percentage rate is up there with the best of them.

If goals win teams tournaments, England will once again rely on the ever-prolific Harry Kane in Qatar, their prized striker who has scored a remarkable 51 goals in 75 appearances for his country.

The Golden Boot winner in 2018 will trouble the best defences around then read your children a bedtime story for good measure. Is there nothing the Spurs ace can’t do?

Harder than any sitdown interview I've ever done 😉

On World Mental Health Day, I'm reading The Lion Inside on tonight's Bedtime Story on CBeebies - a story about confidence, self-belief and a shy little mouse who sets out on a journey to find his roar. pic.twitter.com/3AVhPaAHr5

England’s World Cup winner odds are presently priced at 13/2, which feels entirely fair given they have a plethora of exciting talent at their disposal while it matters too that they possess an impressive record in this competition in recent times.

In their last five World Cups, the Three Lions have twice reached the last eight and exited at the semi-final stage last time out.