Who Is The Greatest NBA Player NOT Named Michael Jordan Or LeBron James?

Excluding Michael Jordan and LeBron James, who is the greatest basketball player in NBA history? 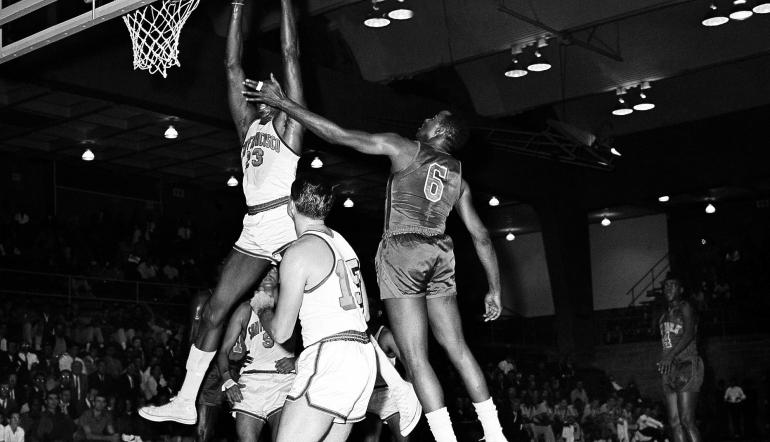 The debate about the greatest ever NBA players tends to centre around LeBron James vs Michael Jordan.

The following five players span generations, and some of them made their way into our greatest ever starting five. All have enjoyed immense success in the NBA, some winning more titles than others.

Putting any of them ahead of Jordan or James may be a stretch, but their legacies shouldn’t be defined in such a way. Instead, let’s celebrate their greatness…

Wilt Chamberlain’s two NBA titles might not match others on this list, but there’s no question he belongs in this group.

Playing from 1959 through to 1973, Chamberlain collected four MVP awards and six scoring titles. He owns the four highest scoring seasons ever, and he is the only player ever to score 100 in a game.

Wilt The Stilt holds 72 NBA records and has had his jersey retired by six teams, including the Harlem Globetrotters and Overbrook High School.

Durability was combined with finger rolls, fadeaways and humiliating dunks. Chamberlain averaged nearly 46 minutes per game for his career, which was a major factor in his obscene numbers.

After being selected second overall in the 1956 draft, Bill Russell constructed not just a Hall of Fame career, but the most decorated of all-time.

No player has more than Russell’s 11 rings, and only Kareem Abdul-Jabbar won MVP on more occasions than Russell’s tally of five. He also led the league in rebounding in five different seasons.

The NBA belonged to the Boston Celtics in the 1960s. Russell was the best player on that team.

He might have had plenty of talent alongside him like Jon Havlicek and Bob Cousy, but there’s no questioning Russell was the leader (as his five MVPs suggest).

He went sixth overall in the 1978 draft, and the five teams before Boston must have quickly been wondering how they missed out. Bird was an All-Star and Rookie of the Year in his first campaign.

Bird won three titles, three MVPs and was named on All-Defense on three occasions. He had two full 40/50/90 seasons, and was one of the most skilful players the game has seen.

Whether a primary ball handler or shooting from the perimeter, Bird was up there with the best in the league. He could do it all.

Kareem Abdul-Jabbar’s tally of six MVP awards is the most in league history. His 20 NBA seasons played was a record at the time, and he remains the all-time top scorer.

Kareem’s 18 All-Star appearances is also a record, and no one has bettered his 15 All-NBA selections (though it’s been matched by Kobe Bryant, LeBron James and Tim Duncan).

Six NBA championships isn’t a feat achieved by many. In fact, Abdul-Jabbar, Michael Jordan and Scottie Pippen are the only non-Celtics to do so.

Abdul-Jabbar was also involved in perhaps the most significant trade in NBA history, when he left the Milwaukee Bucks to join the Lakers and eventually team up with Magic Johnson.

Abdul-Jabbar became the first player to win Finals MVP with two different franchises, an achievement that has since been matched by James and Kawhi Leonard.

Kareem’s skyhook is one of the most famous moves in league history. Some would name him the greatest centre ever.

Curry might be the least popular choice on this list, but the reasoning isn’t just his individual standard.

Along with fellow Splash Brother Klay Thompson, Curry changed the game, he altered how basketball is viewed and become an icon for a whole generation of guards.

It could be argued Curry’s spot here is a little premature, too. The two-time MVP has years left at the top of the NBA, and his Warriors could yet win another title or two (their NBA odds in 2020/21 will be fascinating).

Magic Johnson and Oscar Robertson could easily have taken this spot. For Curry’s role in the NBA in the 21st century, though, he deserved a mention at the very least.

Golden State, for all their superstars, are never the same team without him on the floor and, as we saw in the 2019 NBA Finals, he causes defences a unique set of problems.