Fabrizio Romano: The Cristiano Ronaldo Saga Is Finally Over

Cristiano Ronaldo and Manchester United, the story is now over after many difficult days following the big interview to Piers Morgan that changed the feeling around the Portuguese star. 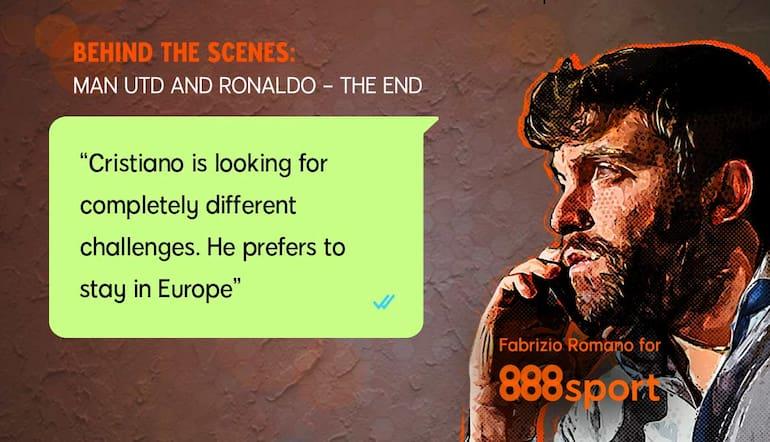 Cristiano Ronaldo and Manchester United, the story is now over after many difficult days following the big interview to Piers Morgan that changed the feeling around the Portuguese star.

Sources guarantee that right after the first release of the interview, the feeling into the club was already clear: it's over, no way to resolve the situation after Cristiano's comments on the club and more.

This was also a kind of protection to the manager, Erik ten Hag; in fact, people into Manchester United board were furious because of Ronaldo's comments on the head coach and wanted to protect the Erik ten Hag project for the present and the future.

“The club thanks him for his immense contribution across two spells at Old Trafford”, statement confirms. pic.twitter.com/wpkHJLVVpu

Ten Hag himself was described as "disappointed" by Cristiano Ronaldo: he was not expecting the Portuguese star to attack Man United, some young players, manager and the whole club in that way.

The reality is that the issue was there since June, it was not something new for Manchester United as Cristiano Ronaldo wanted to leave in the summer but it was not possible to find the right solution.

Probably, pushing for a new club was the best way for all parties but they decided to try again together and the result was more than disappointing.

Ten Hag, his staff and important people in Man United board decided together to push with the legal team to find a way and resolve the Cristiano Ronaldo situation in a very fast, clear and strong way to allow the club working on future signings, project and not on a complicated issue that was just creating a problem in public, in private and also at Carrington with Manchester United players not in an easy situation.

Meanwhile, sources guarantee again that Cristiano has never created any problem during training sessions or similar situations; not even a problem with the coaching staff, the Portuguese star was just not happy in many cases when he was not playing but also furious after that Tottenham game when he decided to leave the stadium early.

In that case the situation was really tense; but then, never creating any problem to the team or having any issue with the teammates.

Ronaldo has been described as professional in every training session; but 100% unhappy as he thought multiple times Ten Hag was not respecting him.

Manchester United will save around £17m as Cristiano Ronaldo agreed not to receive any pay off. 🔴🤝🏻 #MUFC

Plan was to invest on new striker in July but Man Utd are now already exploring the market to find a solution in January. pic.twitter.com/NCo0oLhokg

In the last few days, Cristiano Ronaldo's camp and Manchester United agreed on one important point: both parties wanted a clean break: no fights, no public attacks anymore and a respectful statement on both sides to make sure the history of Cristiano as a Manchester United player in the past remains.

This is why there will be no pay off for Ronaldo, despite having £17m of his salary still valid until June 2023; there are no ongoing strings on either side, Ronaldo and Manchester United have closed this story now looking for completely different challenges.

Now, his agent Jorge Mendes will be working hard to find solutions for Cristiano Ronaldo; his preference goes to European clubs, more than different kind of countries or leagues. Work in progress.