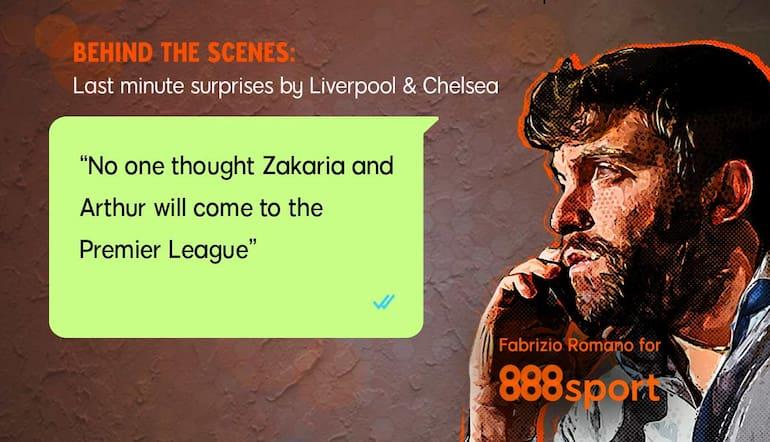 The transfer market is full of ideas, planning, long-term strategy ... but often also of surprises, unexpected moves and twists especially at the end of the window.

Two deals that surprised everyone are certainly those that occurred on Deadline Day for Liverpool and Chelsea.

Nobody thought that Arthur Melo could become the new midfielder for Jurgen Klopp or that Denis Zakaria could sign with Chelsea as a new defensive midfielder to complete the long summer of Todd Boehly, yet it happened as in the tradition of Deadline Day which always reserves unexpected surprises.

Liverpool are not planning to send Arthur Melo back to Juve in January, despite rumours coming from Italy. Arthur is working hard to find the best condition. 🔴🇧🇷 #LFC

Stories have been denied on both club and player side — Arthur, 100% focused on Liverpool. pic.twitter.com/APnkTxaukR

Liverpool have been looking for a new midfielder for some time. Yes, because Jurgen Klopp's priority during the end of May and the beginning of June was to sign a top player like Aurelien Tchouameni.

There have never been real chances of signing Jude Bellingham as Borussia Dortmund have always responded negatively to every kind of approach from every top club, but Tchouameni was a top target for Liverpool who tried to change his mind to the end.

Nothing to do, because despite Liverpool's proposals and also Paris Saint-Germain's attempts with the French's agents, Real Madrid has always been Tchouameni's dream since he was a child and so his decision was confirmed.

The €100m add-ons included package brought Tchouameni to Madrid, Liverpool so they stopped looking for the midfielder waiting for summer 2023 for an important signing. But the situation suddenly changed in August.

🥇| In June, Liverpool “tried in many ways” to sign Aurelien Tchouameni, with Klopp having plenty of phone calls with the midfielder, who he believed was the perfect option for his project, but the player could not turn down his dream move to Real Madrid. [@FabrizioRomano] pic.twitter.com/NtaSA7bGuF

The reason was the repeated and constant injuries in midfield: Jurgen Klopp lost his best midfielders with physical problems in the first weeks of the new season, which is why the German manager together with the Liverpool board decided to look for a low cost opportunity.

There have never been ideas for an investment like Frenkie de Jong, despite the rumors; just a low cost idea on loan or on good terms, like Konrad Laimer out of contract in June 2023 but defined untouchable by RB Leipzig despite the approaches, it was too late.

So a few hours before the end of the transfer market, Liverpool had considered several options including Rafinha from PSG, brother of Thiago Alcantara, who then joined Al Arabi on a permanent deal few days later. Arthur Melo is a deal born in 48 hours and immediately approved by Klopp: loan with buy option is a smart formula that Liverpool wanted to accept to be fast with Juventus, Arthur was 100% out of Juventus plans after deal collapsed with Valencia few weeks before and so the agreement was reached during the night between August 31st and September 1st.

Loan with salary covered by Liverpool, but also a buy option clause (that Liverpool wanted to keep secret!) for €37.5m payable in two years.

Those close to Arthur call this chance at Liverpool a real dream for the Brazilian midfielder after two difficult years in Italy. Chelsea, on the other hand, had tried more than one move before reaching Denis Zakaria in the last hours of Deadline Day.

PSV Eindhoven's Sangaré was a priority in the last week of the transfer market but the Dutch club called him untouchable because they had no chance to replace him in so little time, while Ajax did not even want to negotiate for Alvarez after having already accepted the departure of Antony against the will of the club, board and manager.

That's why Chelsea needed a last minute solution for a physical player who could give the Blues an alternative of energy in the choices for the defensive midfielder.

Zakaria is an option negotiated 4 hours before the end of the transfer market, because the same agents who negotiated the Aubameyang deal are Zakaria's representatives and thus brought an approved idea to the club's table with great speed.

Again, loan with buy option worth €28m plus add-ons for a player who wanted many in January and will become a new option for Chelsea, who accepted this possibility without hesitation.

Two out of nothing surprises after an unpredictable summer for Liverpool and Chelsea. This is also the nature of the transfer market...