McGregor vs Poirier 3 is nearly here. Find out Conor McGregor next fight odds, the Poirier vs McGregor 2021 fight tips and more. 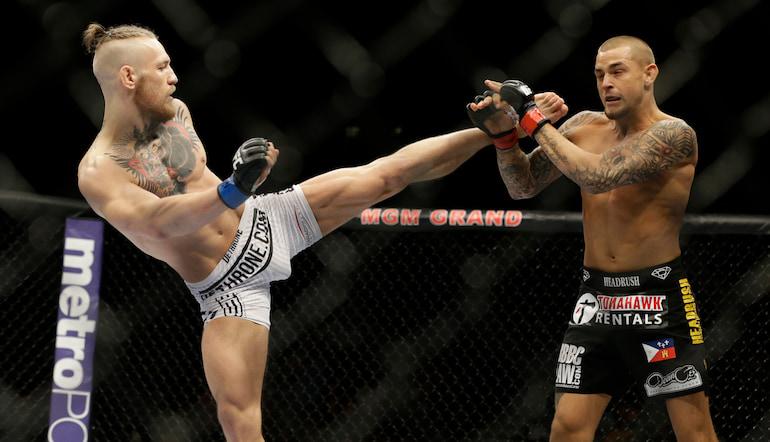 Two of the biggest figures in UFC right now, Conor McGregor vs Dustin Poirier is going to be one of the highlights of the sports betting calendar.

McGregor vs Poirier 3 is the headline fight at UFC 264, which will take place on July 10th 2021 at the T-Mobile Arena in Las Vegas, Nevada.

July’s fight gives UFC fans a third instalment in the Poirier vs McGregor rivalry, with the Irishman beating his opponent in September 2014 before ‘The Diamond’ avenged that loss in January 2021.

UFC betting odds have McGregor at 5/6 with Poirier priced as the slight underdog at 19/20 but there is little to split these two MMA superstars in the market.

Two of the biggest names in sport, McGregor vs Poirier has the potential to be a classic. The stage is set for Poirier vs McGregor 3 and fans can barely contain their excitement.

With the clock ticking down to UFC 264, we take a closer look at both fighters ahead of Conor McGregor vs Dustin Poirier part 3.

Conor McGregor has been a household name in the mixed martial arts world since bursting onto the Ultimate Fighting Championship scene in 2013.

Looking specifically at McGregor record data, Notorious has enjoyed immense success at the peak of the sport – winning 22 of his 27 UFC fights.

In addition, Conor McGregor PPV numbers are consistently high. The Irishman has averaged well over 1 million buys in his eight UFC pay-per-view bouts.

Of McGregor’s 22 wins in UFC, 19 have come by way of knockout with one by submission and two by decision.

Meanwhile, four of McGregor’s defeats have come by way of submission while he also lost once via knockout. If you are backing against the Irishman, make sure to check out McGregor odds to lose by submission.

A legend of the Octagon, UFC fans will be familiar with Conor McGregor betting odds having seen the Irishman compete in 27 mixed martial arts bouts throughout his career.

Conor McGregor next fight rumours are rife whenever the Irishman is set to step into the octagon and millions of UFC followers around the world will be looking for the latest news.

At the time of writing, McGregor is due to fight Dustin Poirier on July 10th and those looking for Conor McGregor next fight information should jot down this date.

Meanwhile, avid UFC fans will be searching for McGregor odds on Notorious to announce his retirement for the fourth time in the immediate aftermath of the fight.

The former featherweight and lightweight double-champion has retired on three separate occasions but McGregor has returned to the octagon each time.

While there is unlikely to be any news regarding the next Conor McGregor fight in the near future, we can assume that Notorious will fight on a major UFC card again.

McGregor vs Poirier is one of the most eagerly anticipated bouts of the year and UFC fans in the UK will not want to miss it.

UFC 264 official start times and Conor McGregor ring walk times are yet to be confirmed but UK fight fans can expect the headline fight to begin at around 6am on Sunday 11th July.

McGregor is one of the biggest names in UFC history and MMA fans from all over the world will want to know the latest news, injury information and McGregor next fight rumours.

Here at 888sport, punters can find UFC 264 tips, McGregor vs Poirier betting odds and the latest breaking news in the UFC world.

A popular name in the MMA betting community, Conor McGregor breaking news is shared quickly over social media and online. Everyone wants to know what Notorious is up to!

Like McGregor, Poirier odds are usually short whenever he steps into the octagon – such is his status in the Ultimate Fighting Championship world.

Poirier has fought 34 times, winning 27 of those while suffering just six defeats. His record is remarkably similar to Conor McGregor record numbers on paper.

Of his 27 victories, Poirier has secured 13 by way of knockout while recording seven wins by submission and seven by decision.

In terms of his losses, he has been knocked out twice, has lost via submission in two of his fights and has also suffered defeat by decision on two occasions.

In addition, Poirier also has a no contest on his record after referee Herb Dean declared his fight with Eddie Alvarez as a No Contest.

As of 9th May 2021, Poirier is slated to fight Conor McGregor at UFC 264 on July 10th. Dustin Poirier next fight rumours are in the media but The Diamond remains focused on McGregor for the time being.

Once Poirier vs McGregor bets are done and dusted, more information will come to light regarding the next Dustin Poirier fight in UFC.

Depending on the outcome at UFC 264, Poirier vs McGregor 4 could be on the cards and we may be discussing Dustin Poirier’s next fight vs Conor McGregor once again.

Prominent in UFC tips ahead of every fight, Poirier is likely to return to the Octagon in the future – whether that is for a fourth instalment of Poirier vs McGregor or not.

At the time of writing, these are the bouts scheduled to take place at UFC 264 prior to the Conor McGregor vs Dustin Poirier fight.

The Notorious vs Diamond rivalry began on September 27th 2014 as Conor McGregor and Dustin Poirier stepped into the octagon together for the first time.

It was on the main card of the UFC 178 pay-per-view event, which was headlined by Demetrious Johnson’s UFC flyweight title defence against Chris Cariaso.

Where Was McGregor vs Poirier 1 Held?

One of the most famous venues for hosting combat sports, the MGM Grand was selected as the best arena to host the UFC 178 show.

This is hardly surprising given the history of boxing betting and mixed martial arts in Las Vegas and the MGM Grand is one of the finest venues in the city.

Conor McGregor was widely regarded as the rising star in Ultimate Fighting Championship at the time and the Irishman put on a sublime show to clinch a rapid victory.

McGregor odds inplay would have been short as Notorious gathered momentum in the early exchanges. Poirier just couldn’t live with the Irishman’s intensity.

With just over 90 seconds gone, McGregor had Poirier’s measure and he pounced on a loose uppercut to drop Poirier before taking full advantage on the ground.

The official had no chance but to call off the bout and McGregor confirmed his status as a powerhouse in the sport in just one minute and 46 seconds of action.

Abu Dhabi’s Fight Island was the location for the long-awaited Conor McGregor vs Dustin Poirier rematch, with the fight taking place on January 24th 2021.

This time around, McGregor vs Poirier was the main event on the UFC 257 card and MMA betting fans around the world tuned in to watch what they thought would be a Notorious victory.

Coming out of retirement for the third time, McGregor was perhaps a little sluggish but he was still expected to win the fight. McGregor betting odds suggested a repeat of the Poirier vs McGregor 1 result.

However, things didn’t go to plan for Notorious at Fight Island as Poirier defied UFC betting odds to level up the McGregor vs Poirier rivalry at one victory apiece.

The American southpaw clinched a technical knockout two minutes and 32 seconds into the second round after a furious flurry of punches that handed McGregor the first TKO/KO loss of his career.

While still unconfirmed, McGregor vs Poirier is likely to be shown live on BT Sport Box Office – one of the leading channels for UFC fans in the United Kingdom.

Due to the magnitude and profile of the UFC 264 fight card, McGregor vs Poirier 3 is likely to be a pay-per-view bout and UFC on BT Box Office is usually in region of £20-25.

But for that, you’ll get full access to the entire show – from UFC ring girls to Conor McGregor betting adverts and offers, the McGregor vs Poirier card is an absolute must watch.