Michael Schumacher is an iconic name in the world of sport but what is his estimated net worth? We look at the Ferrari legend and discuss his incredible success in Formula 1. 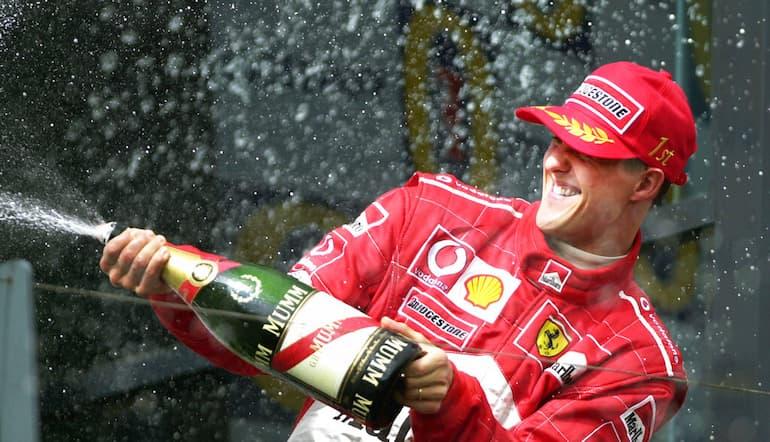 A seven-time world champion and with a solid claim as the greatest Formula One driver ever, Michael Schumacher took Benetton to new heights, he carried Ferrari back to the top, and he broke pretty much every F1 record in the process.

The heftiest compliment of Schumacher’s career was that he often made odds on Formula 1 seem a formality. His Scuderia was imperious. He was fearless in wheel-to-wheel racing, often crossing the line from what was deemed acceptable.

While never far from controversy, whether with Jacques Villeneuve, Damon Hill or others, Schumacher was universally admired on the track.

Many of his records have since been toppled by Lewis Hamilton – his successor as the betting face of Formula One – but Schumacher’s legacy holds firm.

Life changed for the German in the winter of 2013. He has been out of the public eye since then, though the Schumacher family released a Netflix documentary in 2021 providing fresh insight into his life and hints at his condition.

Michael Schumacher’s net worth is believed to be in the region of £500 million. Schumacher was the highest-paid driver in Formula One for much of his career, and he earned millions away from the asphalt in endorsement deals.

Schumacher was listed as the highest-paid athlete on the planet in 1999 and 2000. It was reported in 2005 that he was the first ever billionaire sportsperson.

One of Schumacher’s biggest sponsors was Deutsche Vermögensberatung. The company paid him $8 million over three years to have their brand across the front of his post-race cap, and the former world champion also had a lucrative deal with watchmaker Omega.

The most successful driver in Formula One betting tips of all-time at the time of his retirement, Schumacher was a man in-demand from breaking onto the scene in the early-1990s all the way through to his Mercedes comeback.

In late-December 2013, Michael Schumacher was skiing down Combe de Saulire with his son, Mick.

Crossing an unsecured off-piste area between Piste Chamois and Piste Mauduit, Schumacher fell and hit his head on a rock, causing a severe head injury.

His condition was severe despite wearing a ski helmet – doctors said Schumacher would likely have died without a helmet.

He was airlifted to Grenoble hospital and had two surgeries before being placed in a medically induced coma. There were signs of consciousness in March 2014, and Schumacher was transferred to Lausanne University Hospital in June.

The seven-time world champion returned to his home in September 2014, and the family have kept his condition very private since then.

Reports that he could walk again were denied by his lawyer in 2016, while former Ferrari boss and friend Jean Todt said he ‘struggled to communicate’.

In September 2019, Schumacher was treated in Paris by Philippe Menasché, a leading figure in cell surgery.

Speaking in 2019, Todt said, "I saw the race together with Michael Schumacher at his home in Switzerland. Michael is in the best hands and is well looked after in his house. He does not give up and keeps fighting.

"His family is fighting just as much and of course our friendship cannot be the same as it once was just because there’s no longer the same communication as before."

Health updates have been kept to a minimum since the accident, with the family aiming to maintain as much privacy as possible.

Before the couple got together, Corinna was in a relationship with another Formula One driver, Heinz-Harald Frentzen. She’s a lifelong horse lover, and won the European Championship in Western Style Horse Riding in 2010. 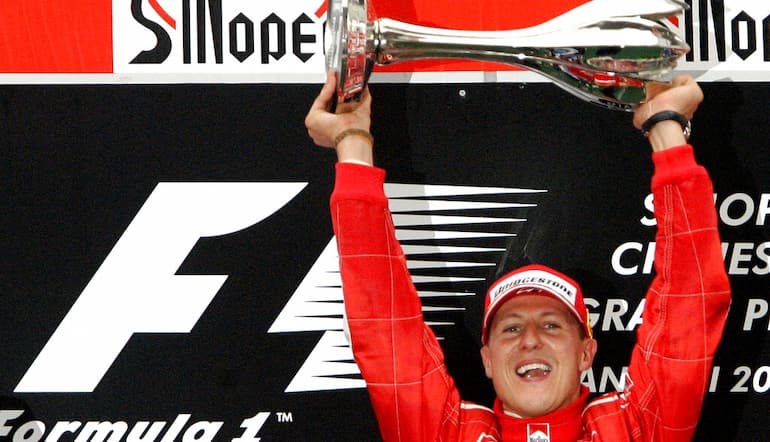 The couple own horse ranches around the world, including in Texas and Switzerland.

Following Michael’s accident, Corinna sold his private jet and holiday home in Norway. She played a major role in the production of the Netflix documentary that was released in 2021.

Michael Schumacher’s son is Mick Schumacher. Mick has followed in his father’s footsteps, making the leap to Formula One for the 2021 season with Haas.

While not driving for one of the most successful F1 teams, Mick produced some solid performances in his rookie season, albeit in an uncompetitive Haas car.

Coming up through karting like his father, Mick was the runner-up in the European and World Championships in 2014 before working his way through the Formulas.

The 2016 season was a strong one for Mini Schumi with a second-place finish in the Formula 4 championship.

He was the Formula 3 European champion in 2018, and competed in two Formula 2 seasons with Prema Racing. At 21 years old, he got the better of Callum Ilott in a tense battle for the F2 title in 2020.

A documentary film entitled ‘Schumacher’ was released on Netflix in September 2021.

Directed by Hanns-Bruno Kammertöns, Vanessa Nöcker, and Michael Wech, this documentary dives into some of the best driver rivalries of all-time between Schumacher and other iconic Formula One figures.

The focus is on Schumacher’s driving career, his journey through karting and making it in Formula One, but his life post-accident is also touched on.

Featuring prominently in the documentary, Corinna Schumacher said, "We're together, we live together at home. We do therapy, we do everything we can to make Michael better and ensure he is comfortable, and to simply make him feel our family, our bond.

"Of course I miss Michael every day. But it’s not just me who misses him. The children, the family, his father, everyone around him. I mean, everybody misses Michael, but Michael is still here. Different, but he’s here, and that gives us strength, I find."

F1
Formula One Betting Tips
About the Author
By
Sam Cox