Which Player Has The Most Grand Slam Titles In Tennis History?

Which tennis player has won the most Grand Slam events in the sport's history? We look at the men's titles and women's tennis trophies list... 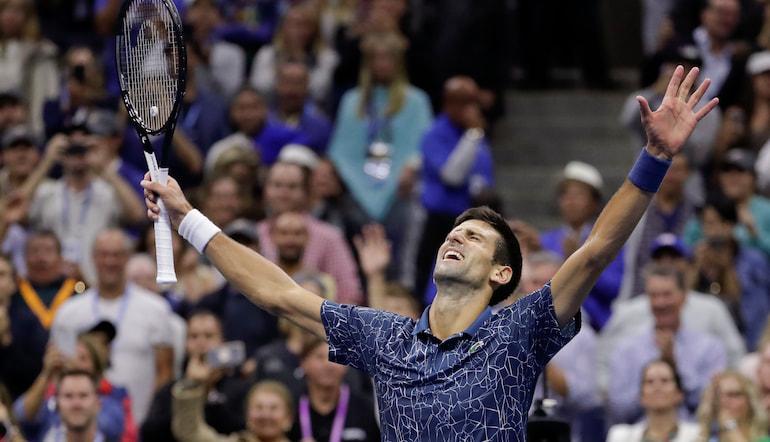 The ATP and WTA tours are a constant cycle. It is a grind for most players, a treadmill of worldwide travel and regular events. The highlight of that marathon is when tennis betting turns to the Grand Slams.

Melbourne, Paris, London and New York each have their fortnight. A couple of weeks when dreams are realised, and history is made.

A place in the sport’s history is forever guaranteed with a Grand Slam win on the grass of Wimbledon, the red clay of Roland Garros or in front of the bellowing atmospheres in Flushing Meadows and Melbourne Park.

The whole perception of a player in tennis betting tips can swing with a Slam triumph.

It is the ultimate goal for a professional tennis player, and has long been a bargaining chip in discussions about the best tennis players of all-time.

Comparing Slam tallies is often the final matchup when weighing up Roger Federer versus Novak Djokovic or John McEnroe versus Jimmy Connors.

Without further ado, let’s take a look at the most successful players in the Open Era.

The Big Three have changed the game. Not only dominating for 15-plus years, they have rewritten the sport’s record books. Previous all-time greats have seen their biggest achievements dwarfed by the accolades of Roger Federer, Novak Djokovic and Rafael Nadal, who are in a three-way tie on 20 Grand Slams apiece.
Federer overtook Pete Sampras when he won at Wimbledon in 2009. It was an historic moment in the history of men’s tennis, but Sampras has since been left long behind by the dominant trio.
While they have each completed the career Slam, there are obvious associations. Djokovic is the most successful of all-time in Melbourne. Federer has that honour at Wimbledon, and Nadal has been unbeatable at Roland Garros. It’s perhaps unsurprising then, that the US Open has been the best opportunity for other players to lift a Slam trophy over the last 15 years.
Since 2009, five non-big-three players have won the US. Stan Wawrinka is the only man to break up the Big Three since 2005 at the Australian and French. Andy Murray, who spent many years on a par with Federer, Nadal and Djokovic, is the only other player to win at Wimbledon since Lleyton Hewitt’s title in 2002.
The achievements of Sampras, Bjorn Borg and others shouldn’t be overshadowed. It is unprecedented to have a trio as far ahead of the pack as Federer, Djokovic and Nadal have been, but Sampras’ play at Wimbledon, and the peak of Borg on the clay and grass, was every bit as scintillating.
Further down the list, Rod Laver’s five titles might seem unspectacular, but he won six before the Open Era, too. He’s the only player to hold all four Slams in one calendar year (1969).
Andre Agassi had his fair share of heart break and didn’t dominate a single Slam in the same way as others, but he’s the only player other than Laver, Federer, Djokovic and Nadal to win all four Slams throughout his career.
•    Roger Federer – 20
•    Novak Djokovic – 20
•    Rafael Nadal – 20
•    Pete Sampras – 14
•    Bjorn Borg – 11
•    Andre Agassi – 8
•    Ivan Lendl – 8
•    Jimmy Connors – 8
•    Mats Wilander – 7
•    John McEnroe – 7
•    Boris Becker – 6
•    Stefan Edberg – 6
•    John Newcombe – 5
•    Rod Laver – 5
•    Jim Courier – 4
•    Guillermo Vilas – 4
•    Ken Rosewall – 4
•    Stan Wawrinka – 3
•    Andy Murray – 3
•    Gustavo Kuerten – 3
•    Jan Kodes – 3
•    Arthur Ashe – 3

Overtaking Steffi Graf at the Australian Open in 2017, Serena Williams is the most successful tennis player of all-time. Combining unbeatable peak performance with remarkable longevity, Serena has spent the best part of two decades at the centre of tennis predictions since winning her first Slam in 1999.
Lifting the Wimbledon trophy and Daphne Akhurst Memorial Cup seven times apiece, Serena has excelled on every surface. The clay has been considered a weak spot, yet she has still reached four finals (and won three of them).
It was always going to take something spectacular for anyone to reach Steffi Graf’s tally. The German won at least one Slam for 10 straight seasons, which peaked with winning all four Slams in 1988. Graf still has an array of records to her name, including four ‘Surface Slams’. Serena and Martina Navratilova are the only other players to complete that feat (winning a Slam on each surface in a calendar year).
Graf arrived on the scene just as Chris Evert and Navratilova’s rivalry was coming to an end. The pair had dominated the sport through the late 1970s and 1980s, including a period of 16 straight Grand Slams shared between them from the start of 1982 through to the 1985 US Open.
While Graf was the premier force in the 1990s, she fiercely duelled with Monica Seles, who won seven of nine Slams from 1991 to the start of 1993. A terrifying on-court attack disrupted her career, however, meaning she retired two Slams shy of Margaret Court’s 11.
No player in the 21st century has been able to keep pace with Serena. Venus, her sister, had spells at number one and amassed seven Slams, and Maria Sharapova is one of five women to complete a Career Slam, but neither could match Serena long-term.
Still only 23 years old, Naomi Osaka is in the process of succeeding Serena as the face of tennis. Already with four slam titles to her name, it’s not premature to call Osaka a modern great. It remains to be seen how much further she can climb this list.
•    Serena Williams – 23
•    Steffi Graf – 22
•    Martina Navratilova – 18
•    Chris Evert – 18
•    Margaret Court – 11
•    Monica Seles – 9
•    Billie Jean King – 8
•    Venus Williams – 7
•    Justine Henin – 7
•    Evonne Goolagong – 7
•    Maria Sharapova – 5
•    Martina Hingis – 5
•    Naomi Osaka – 4
•    Kim Clijsters – 4
•    Arantxa Sánchez Vicario – 4
•    Hana Mandlíková – 4
•    Virginia Wade – 3
•    Lindsay Davenport – 3
•    Jennifer Capriati – 3