Who will Gareth Southgate pick in his England XI to face Iran in November? 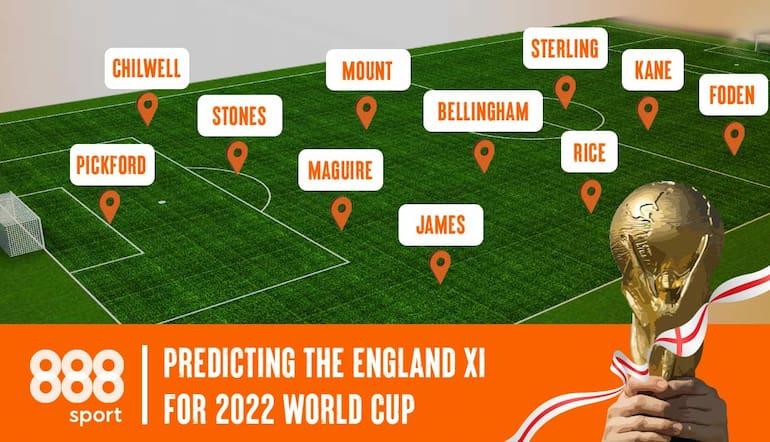 Gareth Southgate’s Three Lions are among the pre-tournament World Cup betting favourites after reaching the final of the Euros last summer and falling to Croatia at the semi-final stage in Russia.

It’s no surprise that England are hefty football betting favourites to win Group B, having been drawn alongside Iran, USA and Wales.

Southgate has been loyal to Jordan Pickford despite spells of inconsistent form.

Only injury can stop Pickford being the number in the England World Cup squad, even if Nick Pope, Aaron Ramsdale or Dean Henderson hit form in the first half of the season.

Pickford has delivered massive moments for England in the last two tournaments, earning Southgate’s trust. He’s a lock to be in the XI against Iran.

Of all England’s riches at right-back, Reece James seems the most likely to start on November 21st.

James could fill the Kyle Walker role on the right of a back three if Southgate plays a 3-4-3, enabling Trent Alexander-Arnold to play as a wing-back.

Or, as we’ve gone with here, James has the rounded game to play as a full-back in a back four. Staying fit is the biggest hurdle for James to overcome between the time of writing (late June) and the start of the tournament.

Southgate is seemingly settled on the spine of his team. Harry Maguire, like Pickford, has been first choice at the heart of defence regardless of his club form, and it’s hard to see that changing in the coming months.

The centre of defence is arguably a weak spot which could put some off backing England when it comes to World Cup predictions.

Maguire has often played well for the Three Lions even when struggling at club level, however.

🗣 "I thought the reception was a joke, an absolute joke. What he has done for us, the way he has performed for England, I don't get it"

Gareth Southgate was FURIOUS after Harry Maguire was booed by some England fans ahead of the friendly against the Ivory Coast 😡 pic.twitter.com/GwGSApw7aj

Much like Maguire, Southgate has favoured John Stones throughout ups and downs in the domestic game.

England have options at the back, including Fikayo Tomori, Joe Gomez and Marc Guehi, but the Stones and Maguire combination is clearly Southgate’s preferred option in the build up to the 2022 World Cup.

There is bound to be discussion about whether Stones and Maguire should start. Southgate will ignore all of that and stick to his tried and tested combination.

Luke Shaw pipped Ben Chilwell to the spot on the left side of the defence at the Euros. The same could happen again if Shaw starts well under Erik ten Hag.

Chilwell is probably in the box seat at the moment, though, with the former Leicester man bound to be starting every game for Chelsea after missing most of last season through injury.

Shaw is coming off another disappointing campaign, and it’s far from guaranteed that he’s first choice at Old Trafford.

Defensive midfield is where England have the least depth.

Declan Rice has made that position his own over the last couple of years, and there’s no doubt he will be starting against Iran. The only question to be answered is who starts alongside him.

Rice has been integral to West Ham’s improvement under West Ham. Having the former Chelsea academy player fully fit and in form is a necessity for England’s football prediction chances in Qatar.

Kalvin Phillips partnered Rice at the Euros and did a great job. Jude Bellingham has leapfrogged Phillips in the midfield pecking order, however, and the Dortmund midfielder continues to go from strength to strength.

Amid a near-universal desire for England to be more attacking, swapping Phillips for Bellingham is one way to do that.

The ex-Birmingham man can build play from deep, create chances in the final third and contribute the odd goal with runs from midfield.

Give it a few years and Jude Bellingham will be winning the Ballon d'Or.

While often maligned, Southgate is a big fan of Mason Mount, just as Frank Lampard and Thomas Tuchel are.

Mount and Bellingham as the two eights in a 4-3-3 is a good balance for England – Mount can interchange with the front three and run beyond at times.

There will be calls for Jack Grealish to fill this spot, yet Southgate evidently likes the Manchester City man as an impact player off the bench. Mount isn’t quite a lock, but he’s the next closest thing.

Jadon Sancho, Bukayo Saka and Grealish are in contention for this spot. Foden is in pole position as it stands, and it’s difficult to see how that changes if he stays fit.

His role with City is only growing, and his skillset complements the two guarantees in England’s front three.

With the full backs overlapping, Foden has freedom to roam and pick the ball up between the lines.

We could see plenty of interchange with Mount and those predicting every World Cup result will fancy England more with the City man in the XI.

While Tammy Abraham, Marcus Rashford and Dominic Calvert-Lewin are just three of several other options to lead the line, England have no one else of Kane’s calibre.

Just like Tottenham, England’s attacking play is built around Kane’s ability as a playmaker as much as his prolific goal scoring record. He may well be the Three Lions’ all-time leading scorer by the time Southgate’s side face Iran.

We are bound to go through the same cycle of scepticism about Raheem Sterling’s starting spot before the tournament.

Sterling is one of the first names on the teamsheet as it stands – his fit and chemistry with Harry Kane is invaluable to England’s attack.

A move to Chelsea could be just what Sterling needs to prepare for the World Cup too, after starting just 23 Premier League matches for Manchester City last term.

For all England’s attacking options, no one can fill this role as well as Sterling. His threat to run in behind is crucial.