Our writer looked at the biggest shocks in Six Nations history – but which upset ranks as the greatest? 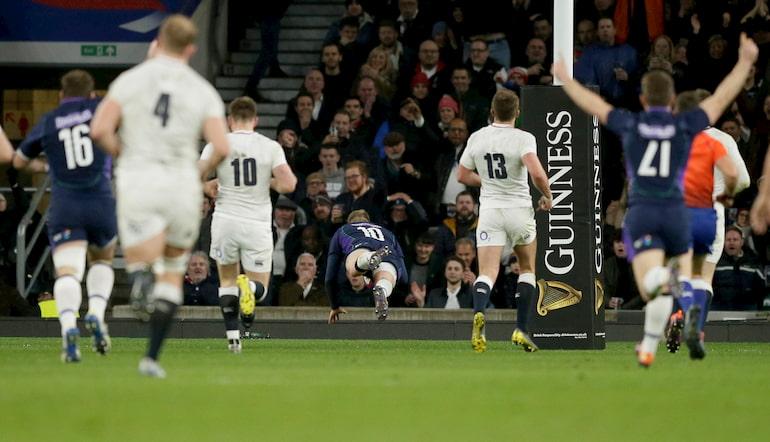 The Six Nations is the pinnacle of international rugby in the northern hemisphere. Italy were given the green light to join the tournament in 2000 and there have been lots of standout memories over the past 20 years.

From Philippe Saint-Andre scoring one of the greatest Six Nations tries of all-time to England demolishing Ireland earlier this year, rugby union’s elite tournament never fails to live up to the hype.

Here, we look at the five biggest shocks in Six Nations history. Upsets are rare in rugby union but this competition has thrown up plenty of shocks over the years – could we see another surprise result in 2020?

Wales fans will have fond memories of denying England a Grand Slam in 1999 – and that run from centre Scott Gibbs was the highlight of the contest.

The result handed Scotland a shock Six Nations triumph and they haven’t tasted success in the competition since.

With the Principality Stadium, arguably the best Six Nations stadium, under construction, Wales were playing their home matches at Wembley Stadium but that wouldn’t matter in the end.

Gibbs’ late score was enough to snatch a dramatic win and it was an enjoyable trip back across the border for the hoards of Welsh fans in attendance.

Even the most ardent Italy supporter couldn’t have hoped for such an impressive start to life in the Six Nations.

Italy were rank outsiders at 500/1 to win the Six Nations title but the Azzurri stunned Scotland to secure a famous debut success.

Scotland were defending champions going into the tournament and most fans expected the Scots to leave Italy with a victory.

However, it wasn’t to be as Italy fly-half Diego Dominguez kicked 29 points to put Scotland to the sword; to this day it remains one of the most embarrassing defeats in Scottish rugby history.

Ireland were 21-point underdogs when they visited Twickenham in 2004 but England were second best in all departments.

Martin Johnson had retired, Jonny Wilkinson was injured and England’s lack of leadership was clear for all to see against a spirited Ireland. Nobody could argue that England deserved to win.

England are the most successful team in Six Nations history with 28 titles and they will be hoping to challenge for number 29 this year.

Avoiding another surprise home defeat to Wales on March 7th will be key to their Six Nations title aspirations. Wayne Pivac's side could take a leaf out of Ireland's book ahead of that clash...

Without a doubt, this is the biggest shock in Six Nations history.

France had clinched the Grand Slam in 2010 while Italy had made seven changes ahead of a Wooden Spoon decider with Scotland the following week – nobody expected the Azzurri to prevail.

In fact, bookmakers had Italy as 20-point underdogs prior to kick-off. Les Bleus were one of the best teams in the world and Italy had been struggling all tournament.

However, Mirco Bergamasco inspired Italy to their greatest ever success, with an inch-perfect shot at goal from the touchline landing with five minutes on the clock.

You couldn’t blame England fans for thinking the job was done at half-time in this one. Rugby union betting odds had England as low as 1/100 at one stage.

With the hosts leading 31-7 at the break, England were in complete control and another heavy Twickenham hammering for Scotland looked likely.

It is difficult to describe what happened in the second half. The momentum shifted towards Scotland and Gregor Townsend’s side were just seconds away from a famous victory before England snatched a late draw.

The Twickenham crowd were stunned but left the stadium having witnessed one of the great Six Nations fixtures.