Buffon vs Casillas: Who Is The Better Goalkeeper?

Buffon vs Casillas is a tough one to call. Here, our football expert tackles the goalkeeper debate 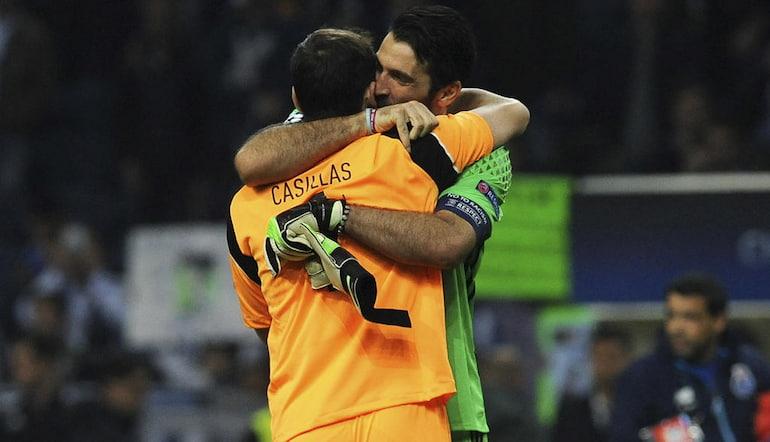 Football expert Ste Tudor (@SteTudor123) tackles the Buffon vs Casillas question - read on to find out which side of the argument he is on...

For a quarter of a century and more, Gianluigi Buffon and Iker Casillas straddled world football as goalkeeping goliaths who between them completed their sport.

Think that’s an exaggeration? Combined, the two legends have won 15 league titles for their respective clubs, and each have a World Cup winner’s medal pride of place in cabinets crammed to the brim with silverware.

Who gets your vote - Gianluigi Buffon or Iker Casillas?

They have been voted the best keeper on the planet a remarkable five times apiece and remained at the very pinnacle of their profession for such a long period it can only be described as an era.

Along with the almost-equally sublime Manuel Neuer, each have been at the vanguard of a goalkeeping revolution that has seen their position substantially change in recent years.

Along with the almost-equally sublime Manuel Neuer, they have elevated their craft to unparalleled heights.

So, while everyone else endlessly debates about the considerable merits of Cristiano Ronaldo and Lionel Messi and who is greater, isn’t it about time we turned to these two iconic figures between the sticks and did likewise?

Buffon vs Casillas? Who is number one?

To determine this, we must break down the various skillsets of a multifaceted role, beginning with their principle task of keeping the ball out of the net.

Here, Casillas wins out, but only marginally, blessed as he was with razor-sharp reflexes and outstanding agility, the likes of which we have rarely seen before.

Should acrobatics be required, the player nicknamed ‘San Iker’ (‘Saint Iker’) could be as spectacular as the next stopper until his retirement in 2020, but in truth he hardly needed to resort to miracle saves, his footwork and anticipation both consistently immaculate.

All of the above also naturally applies to Buffon, if to a slightly less degree, and if our life depended on a one-on-one we’d go with the Spaniard. This is the extreme example we must reach for to separate this magnificent shot-stopping pair.

Casillas’ impenetrable air pervaded the Bernabeu for 16 years, making him the bane of opponents great and good as Real Madrid challenged Barcelona at the top throughout. Our La Liga predictions for 2022/23 tip Los Blancos to once again reign supreme in Spain.

Of course, palming a shot around the post is only a portion of a goalkeeper’s responsibilities and in all other regards Buffon can lay claim to being the best all-rounder of his generation.

In his organisation of the back-line ahead of him and from his formidable bossing of a penalty area – a strength that factors in his peerless ability in dealing with crosses – the Italian is unrivalled, and from this leadership comes a stature that should not be downplayed.

Strikers knew they were facing the great Gianluigi Buffon that particular afternoon. That thought alone was nigh-on worth a goal head-start.

Having blazed a trail at Parma as a precocious teenager, the Tuscan custodian went on to make over 500 appearances for Juventus, his presence and talent being a sizable reason why the Zebras so regularly legitimized their slender Serie A odds and won Scudettos year on year.

There in Turin he was nicknamed ‘Superman’ for goodness sake. What more needs to be said?

Comparing each player’s career feats is like taking a measuring stick up K2, then Everest.

At club level, the highly accomplished duo won 47 major honours while for Spain and Italy they made an astonishing 334 appearances between them. No other player has adorned the azzurro jersey of Italy more than Buffon.

Casillas’ three Champions League triumphs with Real arguably edges him ahead of his rival for trophies won though Buffon can count himself very unfortunate, losing three finals.

In one, against AC Milan, the 6ft 4 giant made two penalty saves in a dramatic shoot-out. 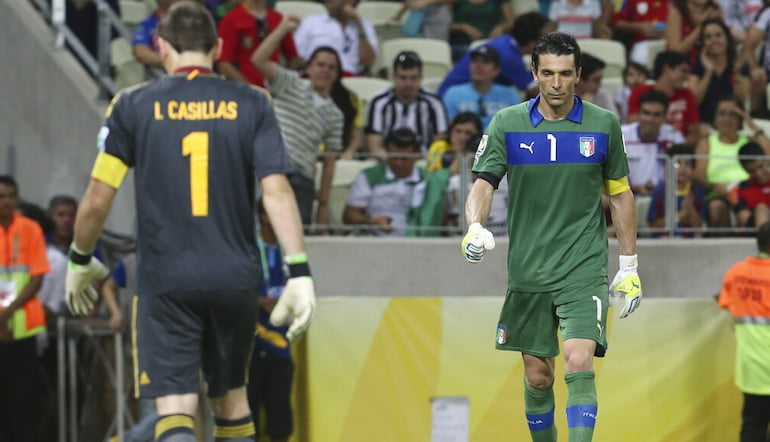 Buffon’s longevity, however, possibly balances this out. As well as being Italy’s record appearance-maker, no other player has featured more in Serie A history, his 657 outings dating from the mid-nineties to the present day as his career winds down at Parma.

Frankly, so vast and impressive are their C.V.s that this particular segment should go down as a score-draw, or more accurately a goalless shut-out and to put their sizable deeds into proper perspective consider this: If you’re a fan of betting then it’s a dead cert that at some point you’ve had a flutter on a game involving one or both players.

Unsurprisingly, these generational greats have amassed volumes of praise down the decades with some of the most interesting observations coming from former keepers, legends in their own right.

In rating one over the other, Peter Shilton was happy to nail his colours to an Italian mast in 2015 saying of Buffon: “He has always been a favourite of mine.”

The ex-Nottingham Forest and England ace went on to compliment ‘Gigi’s consistency but did point out that Casillas possessed a masterful big-game temperament.

Famed Italian stopper Dino Zoff meanwhile – who, like Buffon, also won well over a century of caps for the Azzurri, winning the World Cup into the bargain – weighed in on the debate that same year.

Raising eyebrows across the peninsula he went against his eventual successor who had idolised him growing up, saying simply, “Between Buffon and Casillas, I choose the Spaniard.”

Strikers too have offered their informed opinions on the pair down the seasons, with Fernando Torres once saying of his international team-mate Casillas that Spain were ‘lucky to have him’.

Zlatan Ibrahimovic, by way of contrast, opted for his ex-Juve colleague, with one of the most brilliant forwards to ever grace the top 5 leagues in Europe, admitting Buffon was ‘impossible to beat’.

For the second year in a row our annual Serie A predictions won’t include Parma this summer, with the Yellow and Blues now residing in the second tier.

And it is here we find a 44-year-old Gigi Buffon, still exasperating attackers on a weekly basis, even if now the reflexes are a touch blunter, his agility too lessened by age.

For a staggering 27 years though, the one-time Ballon d’Or runner-up has topped his field, for our money a better goalkeeper than any of the many pretenders who have come after his crown. And yes, the superior of Casillas also, if only by a fraction.