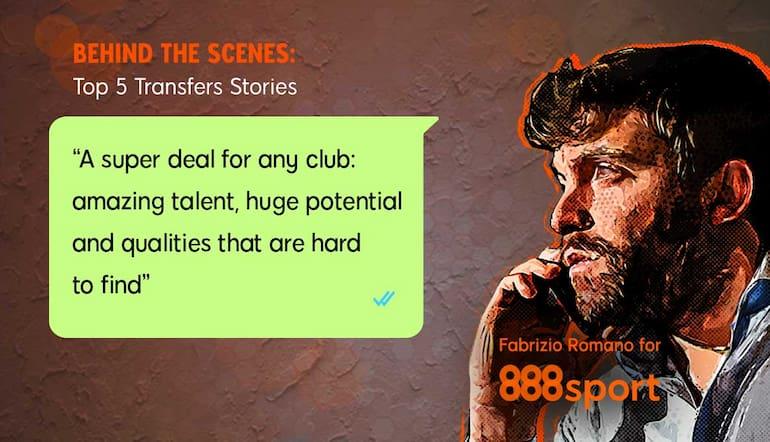 After a crazy summer in 2021, this transfer window can be truly historic.

Because some negotiations are already completed, others are underway and there are high-level opportunities for top clubs, with some of the best players or talents in the world already moving.

These are my top 5 transfer stories this summer.

In my opinion, with Kylian Mbappé signing a new contract with Paris Saint-Germain, it will be impossible to beat Erling Haaland at Manchester City as this summer's top deal.

A true masterpiece by the English club with Pep Guardiola acting behind the scenes together with director Txiki Begiristain to convince Erling.

There were at least four top clubs ready to pay the € 60m release clause to have Haaland this summer, but I think Man City's strategy has been excellent after Harry Kane's deal failed with Tottenham a year ago.

In that case, Daniel Levy never changed his mind and Manchester City wasted a lot of time in an almost impossible negotiation; but knowing how to change targets and invest intelligently in an excellent talent like Erling Haaland is proof that the Man City project is among the best in the world.

A real masterpiece by the board, by Pep Guardiola and by Haaland himself who chose well in advance to avoid problems.

Jurgen Klopp will have a new forward and it is an excellent deal, because Darwin Nunez has shown this year with Benfica that he is one of the best number nines in the world.

This guy has excellent qualities and a lot of potential, which is why Liverpool have decided to invest €75m guaranteed plus easy add-ons to reach a €100m potential package for Nunez.

An agreement that was not easy because many clubs wanted the Uruguayan striker, but Liverpool did not want to fail because Sadio Mané had already decided to leave the club this summer and communicated it to the club immediately after the Champions League final.

I believe Nunez can be the right man for Jurgen Klopp's type of play, guaranteeing more goals as a traditional striker than the characteristics of players like Firmino or Diogo Jota.

Of course, Liverpool's strategy always proves to be a winner: Ibrahima Konaté, Luis Diaz and now Darwin Nunez are three deals conducted with intelligence, perfect timing and no rush to avoid making mistakes.

In this the manager makes the difference, with Klopp who contacted Nunez personally and pushed hard to have him in his team for next season.

Despite having missed out on Kylian Mbappé deal, Real Madrid responded immediately by purchasing one of the best midfielders in the world in terms of potential, quality and future prospects.

Tchouaméni is a very high level player, AS Monaco have tried to resist since last summer but this year it was impossible to keep Aurelién at the club.

In my opinion, with this signing Real Madrid have a 10-rated midfield: Luka Modric will remain for another year and he is the guide of this team, Casemiro, Kroos and Valverde are three certainties to which the enormous talent of Eduardo Camavinga has been added, immediately approved in his first season at Real Madrid.

💪 We put @atchouameni to the test!
🧐 Just how much does our new signing know about Real Madrid?#WelcomeTchouameni pic.twitter.com/ioBWaCdfLB

Tchouaméni is the present and the future of the club, Real have decided to invest €80m plus €20m add-ons to close a very complicated deal as soon as possible.

There have been more attempts by Liverpool and Paris Saint-Germain until the end, but Real Madrid have resisted and won this race thanks to Tchouaméni who only wanted to wear the Blancos shirt, no other option.

A perfect signing for Carlo Ancelotti who will allow the club to have a great future in midfield.

Bayern want to wait and keep the player, but Barcelona are confident and convinced they can get Robert Lewandowski after a verbal agreement with the player for a three-year contract.

A story still to be written, waiting for an agreement between the two clubs that has not yet been reached so far.

In my opinion, if Barça were to manage to buy Lewandowski it would be a deal that can make a difference to the club's recent history: a world-class forward with great enthusiasm, ready for a new project.

Robert was clear, he wants to leave Bayern and his future will be monitored this summer.

Manchester United have discussed his name internally with Erik ten Hag, obviously the Dutch manager knows him well waiting to understand the price that Ajax will require for his Brazilian star.

But wherever he goes, Antony is a super deal for any club: amazing talent, huge potential and qualities that are hard to find at European level.

A name to keep an eye on until the end of the market, provided Ajax decide to sell it this summer...