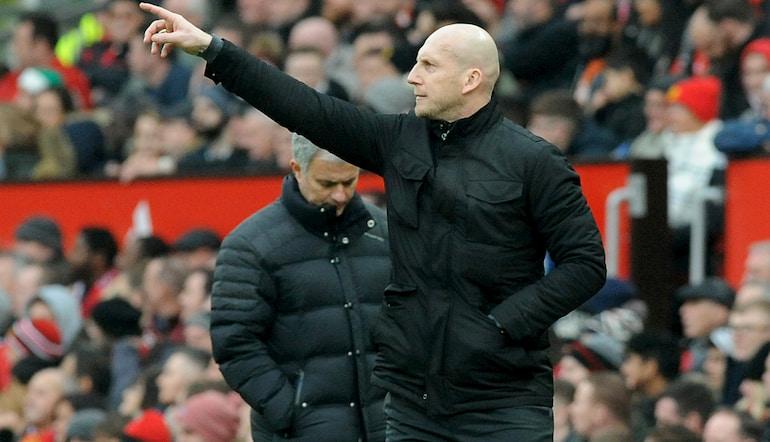 Former Manchester United defender Jaap Stam believes Harry Maguire can only justify his huge price-tag and be a success at Old Trafford with a little help from his friends.

“It’s very important for Harry that the other players around him perform. He can’t do it only as an individual. That will make it a lot easier because with all the money spent on him there is a lot of pressure.

"People expect a lot from him and compare him of course to Van Dijk who is doing so well at Liverpool. But he is a good player: he’s got quality and physique and pace on the ball.”

Naturally, most assistance would be expected to come from Maguire’s centre-back partner but there still remains a good deal of uncertainty as to who that should be.

Is Victor Lindelof the ideal long-term candidate? What about Eric Bailly, who has recently returned to action following a lengthy lay-off?

The Dutch legend is complimentary on both but insists another big-money move for a stopper might be necessary this summer.

“It depends on how you want to play and your style of play of course but as a coach myself looking at United I’d bring another centre-back in to play with Maguire.

"It’s very important that you have someone next to you who you can trust. Someone who you know what they can do and what they bring.”

Speaking exclusively to 888sport, the three-time Premier League winner also shared his thoughts on Paul Pogba, the one-man soap opera who still manages to grab the headlines even when in hiding.

High-maintenance he may be but Stam is adamant that ultimately the French star is worth it.

“Pogba is a quality player and I’d like to see him back in the squad because he brings something extra in terms of his ability on the ball and his passing.

"Then there’s his strength going forward and scoring goals and bringing others into positions to score goals.

"The difficult thing is that agents are always pressing on behalf of their players, especially when you’re a big player and a manager tells you that you’re not going to play. You then want to go somewhere else and play for another club.

"And if you’re a big player like Pogba there are always teams asking for you and who want to sign you. That makes things difficult for the manager who has to keep the player calm and make him feel happy and appreciated.”

While Pogba continues to divide the Stretford End faithful a new star has been born in the form of Bruno Fernandes, a scheming midfielder who has immediately made a positive impact following his £68 million move from Portugal.

Indeed so impressive has the 25-year-old been in his early cameos that Stam is already seeing shades of brilliant ginger.

"He’s not exactly the same. Scholesy was a bit more aggressive without the ball. But in football intelligence he is similar to Paul Scholes.”

Even with the arrival of Fernandes however it is clear that United still sorely lack in attacking creativity and this is especially true with Pogba AWOL and Jesse Lingard enduring a sustained drop-off in form.

It’s why James Maddison and Jack Grealish have each repeatedly been linked to the Red Devils of late with a colossal summer bid expected for at least one of them. The straight-talking Stam hopes it is the former who is prioritised.

“I like Maddison a lot. He’s a midfield player who is very comfortable on the ball and he’s always going into certain positions where he becomes an extra man. He can go by players and score goals as well as creating opportunities for others.

“Jack Grealish, I see more as a winger coming in. For United they need to look more at direct wingers with pace going forward, instead of a player like Grealish.

"Who knows, he might be an important player because he is good in tight areas. But for me, it’s Maddison for United.”

Whether the club is successful in their pursuit of either talent remains to be seen but almost certainly the 13-times Premier League champions will seek to continue rebuilding a side that far too often flatters to deceive, winning handsomely before unexpectedly losing a couple on the bounce.

According to his former team-mate a busy transfer window awaits Ole Gunnar Solskjaer.

“If you look at the squad now I would like an extra centre-back and a left-back; a midfielder and a striker. Up front they have Rashford, Martial and Greenwood but definitely they need a number nine. So that is at least three or four positions.”

He may not be an out-and-out goal-scoring forward, rather a creator supreme but of all the names being linked to the Manchester giant right now the most prominent target seems to be Jaden Sancho.

Yet with Chelsea and Manchester City also reportedly keen why should the exciting teen choose red over blue?

“At United, Sancho gets an opportunity to play and he can be a real influence and help them out. It’s one of the biggest clubs in the world and players look at the future and how a team is trying to play.

"They want to talk to the manager as well about the prospects of the club. Probably every club will tell him the same story. But when you look at him and what he can do he can be a real big influence at United should he go there.”

A real big influence and perhaps too a signing who will demote Anthony Martial permanently to the bench with the winger still showing no signs of being able to string two or three decent games together.

Here is a player blessed with sublime ability who persistently exasperates United fans with hot and cold displays. Stam though has not lost faith just yet.

“He scored a very good header against Chelsea and the boy has a lot of potential. He’s got a very good personality and quality on the ball. And he has pace.

"Sometimes he needs to play it a little more simple, instead of wanting to show his qualities on the ball and being tricky. Sometimes you need to be more direct in the way you play in order to produce.

"He still needs to do better but this is normal for a young player where sometimes you look very promising and then other times you’re not producing.

"In a big team if you want to be a big player you have to be consistent in what you’re doing. I think that’s what he’s looking for as well.”

Inconsistency. It is the word we consistently return to when discussing this present United side and it’s an unwelcome trait that contrasts so sharply with the era that saw them petrify inferior rivals as much as the Dutchman struck fear into the best strikers around.

For Stam however, the key difference between then and now comes down to one fundamental element.

"As a club they need to make sure there is a certain structure in how they want to play and the recruitment. Then hopefully you can build the team again to be a dominant force. That would be nice to see.”

Who Will Win This Season's Golden Boot?

Will Manchester United Finish In The Top 4?