World Cup 2022 Team Guide: Everything You Need To Know About Brazil

Here, we look at the Brazil national team ahead of the 2022 World Cup. Scroll down for everything you need to know on Seleção 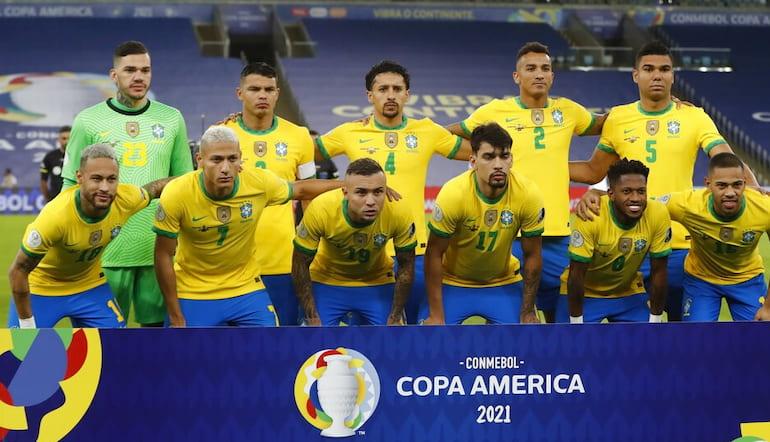 How will Brazil fare at the 2022 World Cup? Join @SamRCox_ as he looks at the five-time winners in his everything you need to know guide ahead of this winter's competition...

Brazil History at the World Cup

Brazil are the most successful team in the history of the FIFA World Cup and perennial football betting favourites. Five-time champions, Brazil have made at least the quarter finals in every tournament except 1934, 1966 and 1990.

They are the only nation to feature in every World Cup, and hold a catalogue of records, including the most goals scored and most wins.

With such a history of success, though, comes serious pressure. Anything other than being crowned world champion is deemed a failure, a level of expectation that few other nations have to cope with.

Brazil lead the way into the #FIFAWorldCup 📈🇧🇷

Here’s the FINAL #FIFARanking ahead of #Qatar2022! pic.twitter.com/tIKd2FZIzt

They have crumbled under that weight at times over the last decade or so, and there is a psychological barrier to overcome this winter.

Recent World Cups haven’t been kind to the Brazilians, with only one last four appearances since 2002. Of course, that ended in humiliating fashion with a 7-1 defeat to Germany in Belo Horizonte.

Much of the squad for Qatar is the same as it was four years ago, when Brazil drew with Switzerland in the group stage and fell to Belgium in the last eight.

A Seleção means ‘the selected team’ in Portuguese, and is commonly used to refer to all sports teams. It is also a nickname for the national team, and a very literal one at that.

Fans might also hear commentators refer to Brazil as Canarinho, meaning ‘little canary’ at points, which is a nod to their iconic yellow home kits.

There is a consensus among World Cup predictions that Brazil will cruise through their group.

While Group G is strong, Brazil are a class above their opponents, and they were fortunate to avoid any of the big hitters in the first round.

It’s hard to go wrong with a Brazil home kit. The green, yellow and blue is always great, but Nike have really hit it out the park this time.

A jaguar pattern across the jersey is a subtle, yet gorgeous touch. The collar is significant without being too much, and there’s a Brazil flag in the button, which is a definite win.

Brazil’s home and away kits for the 2022 World Cup 🇧🇷 pic.twitter.com/dyqCXiN7Jx

If the home kit is bold, the away is downright daring.

The standard blue is used, of course, but the jaguar pattern continues on the sleeves in an eye-catching green, fading up to the shoulders. It could have been a mess. Fortunately, it isn’t.

Who Is The Brazil Manager?

Tite is the Brazil manager for the 2022 World Cup. The former Corinthians boss has been in charge since 2016, leading Brazil to the 2019 Copa America, and winning 75% of his matches in charge.

Only three Brazil managers have taken charge of more matches than Tite, who has already stated that he will step down after this winter’s World Cup.

Alisson, Ederson, Marquinhos, Fabinho and Vinicius Jr are all among the best in the world at their respective positions. There’s no question over Brazil’s best player coming into this World Cup, though.

Neymar, as he has for a lengthy period, is the Canarinho’s star man and will soon surpass Pele to become their all-time leading goal scorer.

Brazil sit top of World Cup winner odds at 4/1 to lift the trophy in Qatar this winter.

Only three players are at a shorter price than Neymar to win the Golden Boot, and the oddsmakers seem to think it’s a foregone conclusion that Brazil top their group with a price of 2/5.