World Cup 2022 Team Guide: Everything You Need To Know About Serbia

Here, we look at the Serbia national team ahead of the 2022 World Cup. Scroll down for everything you need to know on the Eagles 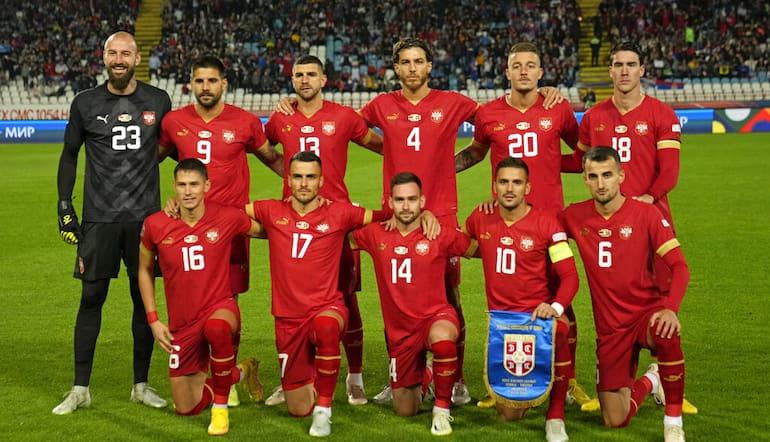 How will Serbia fare at the 2022 World Cup? Join @SamRCox_ as he looks at the Eagles in his everything you need to know guide ahead of this winter's competition...

Serbia History at the World Cup

This is the nation’s third appearance as Serbia, but they featured as Serbia and Montenegro in 2006, and had nine previous World Cup entries as part of Yugoslavia, which included fourth place finishes in 1930 and 1962.

Overall, Serbia have won 18 of their 46 World Cup matches, but still have a positive goal difference in the competition.

Aleksandar Mitrović scored an injury-time winner as Serbia leapfrogged Portugal to seal their place at the 2022 World Cup! 🇷🇸🔥 pic.twitter.com/EOod5NCYAR

Their biggest victory was as part of Yugoslavia, when they recorded an historic 9-0 thumping of Zaire back in 1974. They have been on the end of heavy defeats too, however, including a 6-0 drubbing at the hands of Argentina in 2006.

Their last three World Cup appearances have ended at the group stage, and they will be hoping to be more competitive in Qatar with a talented squad.

A last-minute goal from Aleksandar Mitrovic against Portugal on the final matchday secured an automatic place at this winter’s tournament, avoiding the jeopardy of the playoffs.

The national symbol of Serbia is a double-headed eagle, so it is no surprise that their nickname is The Eagles or Orlovi.

National identity has been a controversial topic since the breakup of Yugoslavia, with national anthems cheered and other nicknames used.

Serbia were drawn alongside the favourites among World Cup winner odds in Brazil. Switzerland and Cameroon accompany them in Group G, which could prove to be the Group of Death in Qatar.

Taking any points from their first match would be massive for Serbia, but they could be playing catch up after facing the Canarinho.

The collar is a big dose of meh, but the Serbian home kit for the World Cup is fine. The red is always imposing, and the gold touches on the logos and sleeves bring a bit of life to an otherwise uninspiring design.

A plain white away shirt could have been boring. Instead, Puma plonked a bizarre gold outline in the middle of the torso.

The Eagles have landed 🇷🇸

Who Is The Serbia Manager?

Former Red Star Belgrade midfielder Dragan Stojković is the current Serbia manager, having replaced Ljubiša Tumbaković after he failed to quality for Euro 2020.

Dusan Tadic has the pedigree. Dusan Vlahovic made the big-money move to Juventus. Aleksandar Mitrovic has started the Premier League season in great form. Sergej Milinković-Savić is one of Europe’s best midfielders.

Several players can make a case for being Serbia’s best – the Orlovi have plenty of top-end talent.

Third favourites in the section doesn’t mean they are out of it by any means, though, as Serbia are 9/2 to make the last eight, and have a couple of fringe Golden Boot candidates in Dusan Vlahovic and Aleksandar Mitrovic (50/1 and 66/1, respectively).