World Cup 2022 Team Guide: Everything You Need To Know About Switzerland

Here, we look at the Switzerland national team ahead of the 2022 World Cup. Scroll down for everything you need to know on the Red Crosses 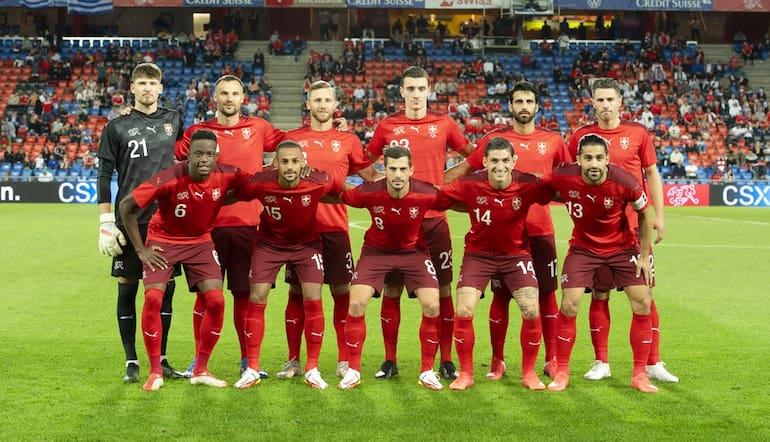 How will Switzerland fare at the 2022 World Cup? Join @SamRCox_ as he looks at the Red Crosses in his everything you need to know guide ahead of this winter's competition...

Switzerland History at the World Cup

Only twice since 1994 have they failed to qualify (1998, 2002), and 2010 was their only group stage exit over that period, which was unfortunate after picking up four points from three matches.

While always competitive in the group stage, the Swiss have never been further than the last eight, a feat they most recently achieved when they hosted the tournament in 1954.

Stephan Lichtsteiner and Valon Behrami are tied for the most World Cup appearances with 10 apiece, while Josef Hügi’s six goals in 1954 are the most scored by any Swiss player in World Cup play.

Switzerland’s biggest win at the World Cup is by three goals, a margin of victory achieved against Italy in 1954, Romania in 1994 and Honduras in 2014.

Like a lot of teams heading for Qatar, Switzerland have a couple of nicknames. Rossocrociati, meaning ‘Red Crosses’, doesn’t take a great deal of working out given the unique nature of the Swiss flag.

Nati or simply ‘National Team’ is as literal at it comes.

Switzerland were matched up with the favourites in World Cup winner odds. Brazil are expected to cruise through this group, but the battle for the second qualification spot could be fiercely competitive.

The Rossocrociati will be desperate to start off with a win on 24th November before they face Brazil.

The Switzerland World Cup kits are pretty standard. We can all picture the shade of red used for the home, this time with some horizontal white lines across the chest and shoulders. It’s fine.

There’s less positive news with the away kit. The barcode-look is back, lower down the chest this time on a white base. The red ‘box’ in the middle is questionable at best.

Who Is The Switzerland Manager?

Former Grasshoppers and Basel central defender Murat Yakin is the current Switzerland manager. Yakin managed both of his former teams before succeeding Vladimir Petković as Swiss boss in 2021.

He has won seven of his 15 matches in charge and will lead the team into a major tournament for the first time in Qatar.

Xherdan Shaqiri was considered Switzerland’s star man for a long time, but that mantle is up for greater debate now with Granit Xhaka, Manuel Akanji and Yann Sommer all staking a claim.

Xhaka carries strong form into the tournament, while Swiss fans will be hoping Denis Zakaria can get some game time at Chelsea after his surprise move to west London last summer.

🇨🇭 Switzerland, including Manuel Akanji and Gregor Kobel, have qualified directly for the 2022 World Cup in Qatar, sending Italy into the play-offs.

Switzerland are 9/2 in football betting to win Group G. No more than a longshot when drawn with Brazil, the Swiss are also up against it when it comes to progressing in the knockout rounds with a price of 11/4 to reach the quarters.

They are 80/1 to lift the trophy, a marginally shorter price than Senegal but way longer than Croatia and Uruguay (both 45s).

Bet on Switzerland at the 2022 World Cup with 888sport today!