World Cup 2022 Team Guide: Everything You Need To Know About Cameroon

Here, we look at the Cameroon national team ahead of the 2022 World Cup. Scroll down for everything you need to know on the Indomitable Lions 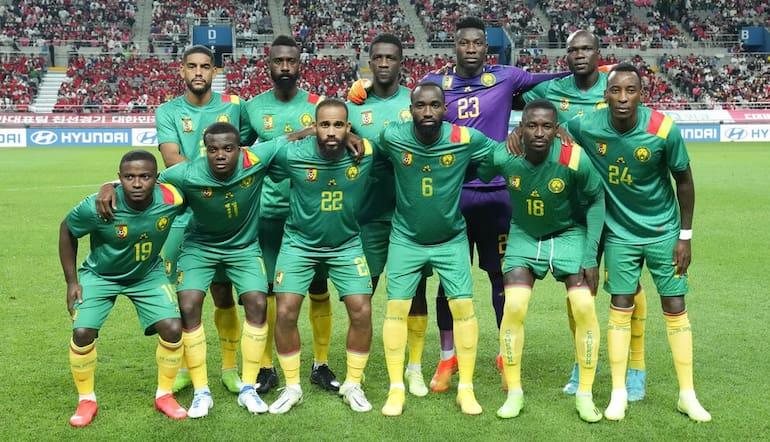 How will Cameroon fare at the 2022 World Cup? Join @SamRCox_ as he looks at the African side in his everything you need to know guide ahead of this winter's competition...

Cameroon History at the World Cup

The Qatar World Cup will be Cameroon’s eighth entry.

Six of their previous seven have resulted in group stage elimination, with their only knockout appearance coming in 1990 when they became the first African team to reach a World Cup quarter-final.

Cameroon didn’t qualify for Russia four years ago and lost all six of their matches in South Africa and Brazil.

An incredible end to extra-time sees Cameroon through on the away goals rule!

They have four victories from 24 World Cup fixtures, three of which came at Italia 90. Just 18 goals have been scored in those matches, with 43 conceded.

It took extra time after 180 minutes against Algeria to confirm their place in Qatar after topping a group with the Ivory Coast, Mozambique and Malawi.

Cameroon have long been recognised as one of the major powers in African football, and that is reflected in their records held as the African nation with the most World Cup appearances, most matches played at the tournament, and with the joint-best performance at a World Cup.

Cameroon’s nickname is Les Lions Indomptables, which translates directly to ‘The Indomitable Lions’. The definition of ‘indomitable’ is ‘impossible to defeat’ – this might be the best nickname in Qatar this winter.

Our World Cup predictions, however, question whether Cameroon being defeated is actually impossible.

Cameroon were drawn with an extremely talented Brazil team, and two competitive European nations in Switzerland and Serbia.

If they are to upset the odds and make the knockout rounds, Les Lions Indomptables need to take at least three points from their first two matches before facing Brazil in Lusail.

There are just six nations who aren't with the big three brands, which is the exact same number as the last World Cup.

Nike are supplying the shirts for thirteen of the countries which is the most, whereas in 2018 it was Adidas with the most. pic.twitter.com/Xb4YhE8L1V

The home, as ever, will be in that famous deep green, apparently with a tonal, diagonal stripe on the body.

Little has been made public about the away kit, but black and white training kits and jackets could be a taster.

Who Is The Cameroon Manager?

Former Liverpool and West Ham defender Rigobert Song is the Cameroon manager, a post he took on in 2022 after Toni Conceição was dismissed.

Song had been manager of Cameroon’s under-23 team for four years and previously served as a caretaker for the senior team.

Nicolas Nkoulou is the most experienced player set to be named in the Cameroon World Cup squad, but the best player at their disposal is Napoli’s André-Frank Zambo Anguissa, who has gone from strength to strength since joining I Partenopei from Fulham.

André-Frank Zambo Anguissa, that is superb! 👏

He plays a lovely one-two before cooly slotting the ball past Alisson...

Napoli are all over Liverpool in the first half! #UCL pic.twitter.com/Vaf5CPQIss

Pre-tournament football betting odds don’t love Cameroon’s chances. Their 11/1 price to win the group is the longest of the section, though interestingly, there are 10 teams with longer odds to reach the quarters.